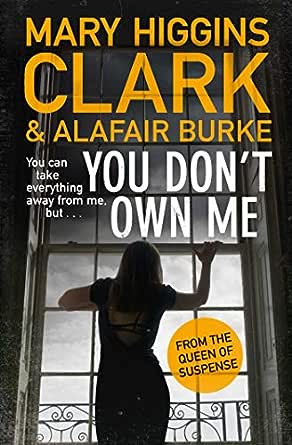 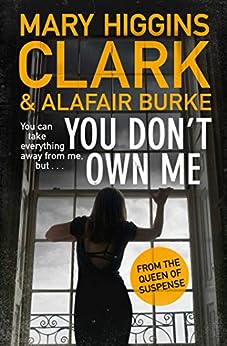 You Don't Own Me (English Edition) Kindle-editie

The extraordinary new novel from the grande dame of suspense, Mary Higgins Clark, and Alafair Burke.

Mary Higgins Clark published her first suspense thriller in 1974, and has been writing ever since. Each of her 51 books has been a bestseller and all of her novels remain in print, with her debut, Where are the Children, now in its seventy-fifth printing. In 2014, Clark joined forces with novelist Alafair Burke to begin the Under Suspicion series, about television producer Laurie Moran and her crew tracking down and solving unsolvable cold-cases.

Laurie and her team have uncovered the worst of humanity over the years, from the murder of a rich woman at the Met Gala ball to the gunning-down of Laurie's own husband. And now Laurie and her crew will be faced with their most difficult case yet...

'Clark plays out her story like the pro that she is . . . flawless' Daily Mirror

'Should come with a warning: start in the evening and you'll be reading late into the night'USA Today

The extraordinary new novel from the grande dame of suspense, Mary Higgins Clark, and Alafair Burke.
click to open popover

ARDT
5,0 van 5 sterren Intrigue, Suspense, and One Great Who-Dunnit!
10 november 2018 - Gepubliceerd op Amazon.com
Geverifieerde aankoop
I have been a longtime MHC fan. I am 44 and have been reading the paperbacks with my mom since I was 12. So, already a fan, but Alafair Burke is a breath of fresh air and really adds that something extra to this Under Suspicion Series. I have followed it since I've Got You Under My Skin and I hope there are many more books to come.

You Don't Own Me has one of those 'WHAAAAT??' moments that makes you think back to the beginning. And then you are on pins & needles until that final moment. You definitely don't feel cheated with this book!
Meer lezen
19 mensen vonden dit nuttig
Vertaal recensie in het Nederlands

Tiffany
5,0 van 5 sterren MHC & Alafair Burke have done it again
21 november 2018 - Gepubliceerd op Amazon.com
Geverifieerde aankoop
I’ve read the other books in these series, and it’s nice catching up with Laurie et al. However, you can read this as a stand-alone story; the authors do go over some details from prior books in the collection so that new readers get an idea of how Alex, Laurie, Grace, Jerry, and others came to this point in their lives.

This book was different from the previous ones in that there’s more focus on Laurie, partly because she’s acquired the attention of a guilty party and her life is in danger. In the other stories, the Under Suspicion show starts the filming with family and suspects much sooner; in this tale, filming doesn’t get underway until around 70% of the novel. With that, I felt like Laurie was the star of this book, more so than in the other books where her storyline was running in the background of the murder mysteries.

In terms of the case being covered in Under Suspicion, I had an idea as to what happened, but there are some twists regarding the depth of the entanglement. There is also something that happens kind of out of left field - it ties into things mentioned early on so it’s not unreasonable, but it gives a curveball that you probably won’t see coming until right before it happens. I finished the book with a smile on my face and I hope that there will be more in the series.
Meer lezen
14 mensen vonden dit nuttig
Vertaal recensie in het Nederlands

Susan Snodgrass
5,0 van 5 sterren Love Her Work!
9 november 2018 - Gepubliceerd op Amazon.com
Geverifieerde aankoop
I will never get tired of reading Mary Higgins Clark. I bought her very first book, 'Where Are The Children?', when it came out in 1975. I was a senior in high school and loved it! I've read it several times since then, too. I never, ever miss one of her books. She is 91 and has been on the bestseller lists for over 40 years now.

She began writing a series with Alafair Burke 5 years ago. These books, the Under Suspicion series, document the producers of a cold case news program and how they choose cases that have long grown cold, get together with everyone involved, and try to solve these crimes. I enjoy them very much. To me, they read like Mary Higgins Clark all by herself. But then, I am a huge fan.
Meer lezen
11 mensen vonden dit nuttig
Vertaal recensie in het Nederlands

Book Club Member
5,0 van 5 sterren Mysterious Stalkers and Political Intrique Make Another Cold Case Hot
10 november 2018 - Gepubliceerd op Amazon.com
Geverifieerde aankoop
When the murder investigation of prominent New York physician Martin Bell goes cold, his parents approach protagonist Laurie Moran in hopes she will feature the case on her television series, "Under Suspicion." Laurie has a remarkable record of solving cold cases while producing her show. For each episode to work, there have to be multiple suspects who wish to tell their stories on camera, hoping to have their names cleared. Initially, Laurie is reluctant to take this particular case, as there appears to be only one viable suspect, Dr. Bell's widow Kendra. As Laurie tries not to rush to judgment, other scenarios begin to form in her mind. Could the good doctor have patients or survivors angry enough to kill him? Was Martin having an affair which could lead to the rage of a jealous spouse? Authors Mary Higgins Clark and Alafair Burke tease out these theories and more. I enjoyed reading the latest developments in Laurie's personal life with her son Timmy, father Leo, and fiancee Alex, who has just been named a federal judge. Political intrigue and clandestine stalkers heighten the suspense and provide a very satisfying read. Mary Higgins Clark, you did it again!
Meer lezen
7 mensen vonden dit nuttig
Vertaal recensie in het Nederlands

PWA
5,0 van 5 sterren WOW, this story Literally Grabs you til you finish!
9 november 2018 - Gepubliceerd op Amazon.com
Geverifieerde aankoop
I love this series. Laurie and her team are solving another cold case. There are lies being told, murder, deceit, greed, all the elements that make a great story. A Senator, a medical doctor, a con man ,and many more- all great characters There are twists that keep your interest all the way thru. The story moves along nicely, no filler pages. I certainly hope we get to read more in this series, it's just that good!
Meer lezen
9 mensen vonden dit nuttig
Vertaal recensie in het Nederlands
Ga naar Amazon.com om alle 336 recensies te bekijken 4,7 van 5 sterren
Terug naar boven
Over ons
Verkoop bij ons
We helpen je graag
© 1996-2020, Amazon.com, Inc. en dochterondernemingen