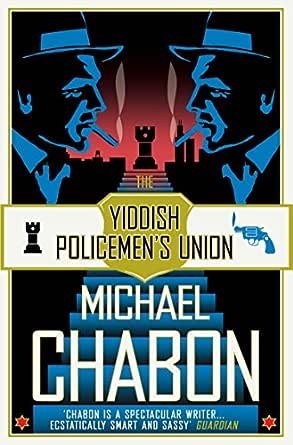 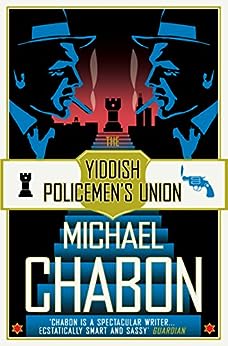 Set in the Jewish homeland of … Alaska, this is a brilliantly original novel from Michael Chabon, author of THE ADVENTURES OF KAVALIER & CLAY and WONDER BOYS.

What if, as Franklin Roosevelt once proposed, Alaska – and not Israel – had become the homeland for the Jews after the Second World War? In Michael Chabon’s Yiddish-speaking ‘Alyeska’, Orthodox gangs in side-curls and knee breeches roam the streets of Sitka, where Detective Meyer Landsman discovers the corpse of a heroin-addled chess prodigy in the flophouse Meyer calls home. Marionette strings stretch back to the hands of charismatic Rebbe Gold, leader of a sect that seems to have drawn its mission statement from the Cosa Nostra. Meyer is determined to unsnarl the meaning behind the murder. Even if that means surrendering his badge and his dignity to the chief of Sitka’s homicide unit – his fearsome ex-wife Bina.

A novel of colossal ambition and heart, THE YIDDISH POLICEMEN’S UNION interweaves a homage to the stylish menace of 1940s film noir with a bittersweet fable of identity, home and faith.

Melanie D. Typaldos
5,0 van 5 sterren It's all about the writing
5 februari 2017 - Gepubliceerd op Amazon.com
Geverifieerde aankoop
I am reading the Nebula Award winning novels in chronological order. This is the winner for 2008.

I must say, this book was very...different. Different in an interesting but sometimes difficult to read way. The novel is liberally embellished with Yiddish, the native language of the characters. There is a glossary in the back which I didn't notice until it was too late. I don't like looking things up anyway, plus the context makes most things obvious.

The story is complex and the ridiculously long names for some of the characters don't make it any easier to keep track of things. There is a lot to follow. This is not a light read, you have to be paying attention. I would not recommend it for an audiobook.

The two main characters are detectives in a province of Alaska to which they have been granted a 50 year lease. The main character, Landsman, life has gone down the tubes, his marriage collapsed leaving him with nothing to live for. He rents a dumpy apartment in a slum where he spends his non-working time drowning himself in alcohol. But he is a driven detective and when a young man is murdered in his apartment building, he takes it seriously. The book follows the complicated path to find the man's killer.

What I really liked about the novel was the language, not the insertion of Yiddish, but the colorful and insightful aphorisms. So much can be conveyed in so few words. I'm going to put a number of them in this review so you can see what I mean. There are a lot, lot more throughout the novel.

The lady has been in and out of the hospital lately, dying in chapters, with a cliff-hanger at the end of every one.

The blood from the back of his head has scattered rhododendrons in the snow.

He can feel his rib cage ringing under the mallet of his heart.

Landsman feels a numbness enter his limbs, a sense of doom that is indistinguishable from peacefulness.

I could go on citing these things but you've probably got the idea by now.

Autonomeus
5,0 van 5 sterren Noir murder mystery in a Yiddish world that might have been
25 november 2019 - Gepubliceerd op Amazon.com
Geverifieerde aankoop
I've been using the lists of Hugo and Nebula Award-winning novels to catch up with science fiction "since cyberpunk." That is where I found this novel, which won both awards in 2008. It is certainly excellent and deserving of awards, though it is not science fiction, and not really very fantastical either.

What many readers and reviewers seem not to know is that Chabon's fictional Federal District of Sitka, a temporary safe haven for Jewish refugees from Hitler created in 1940, was actually proposed and might have happened. The alternative history and setting is not so fanciful!

In the novel, the Alaskan Settlement Act of 1940 creates the District -- this is when Alaska was still a territory, not yet a state. Harold Ickes, FDR's Secretary of the Interior, is chiefly responsible, and the residents' passports are colloquially known as "Ickes passports." (It is an interim status which will expire in 60 years, and the year of Reversion is the setting for the novel.) The result is that only two million Jews are killed by the Nazis instead of 6 million.

In reality, Ickes did champion the creation of a safe haven for Jews in the Alaska panhandle. He called for its creation in 1938, following Kristallnacht. Ickes's Undersecretary Harry Slattery wrote a report which came out in 1940 known as the Slattery Report which spelled out the plan. But FDR never supported the plan, and never mentioned it in public.

The story, told from the perspective of the protagonist, Detective Meyer Landsman, is a murder mystery that is compelling, frequently hilarious, and also tragic. Yiddish words are found on every page, and I have not yet finished looking all of them up. (The Kindle edition supposedly has a glossary at the back, but my hardcover did not.)

The Jews of Sitka and Baranof Island exist in a state of tension with the Tlingit Indians, in an interesting parallel with Israel and the Palestinians. In the novel, Israel never comes to exist as the Zionist Jews are defeated by the Arab armies in 1948. Meyer's partner, his cousin, is half-Jewish and half-Tlingit.

In addition to the ending, which I will not reveal, a hint of Chabon's political sympathies can be found in the fate of the various Leftist, marxist groups among the refugees in 1940. They are gradually, systematically wiped out (arrested) by the FBI's COINTELPRO, led by one of the important secondary characters in the novel who is one of the main villains.