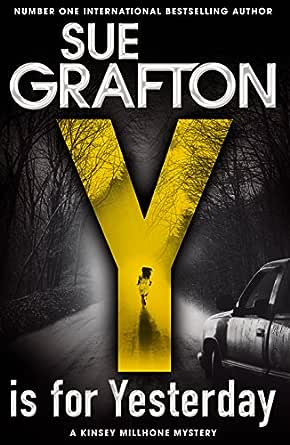 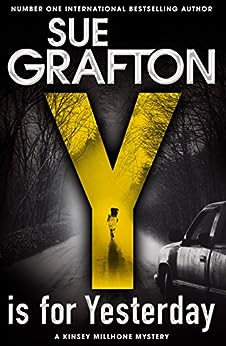 Praise for Y is for Yesterday

"I'm going to miss Kinsey Millhone. Ever since the first of Sue Grafton's Alphabet mysteries, A Is For Alibi, came out in 1982, Kinsey has been a good friend and the very model of an independent woman, a gutsy Californian P.I. rocking a traditional man's job...it's Kinsey herself who keeps this series so warm and welcoming. She's smart, she's resourceful, and she's tough enough to be sensitive on the right occasions."--New York Times Book Review "The consistent quality and skillful innovations in this alphabet series justify all the praise these books have received over the past 35 years."--Wall Street Journal "This will leave readers both relishing another masterful entry and ruing the near-end of this series. Prime Grafton."--Booklist (starred review) "Grafton once again proves herself a superb storyteller."--Publishers Weekly "The series may be coming to a close, but Grafton constructs an intricate plot following two time lines with at least a dozen characters in play while rarely slowing the pace."--Library Journal

"The lively, engrossing...Grafton is in sure command of Kinsey's wise-cracking but warm voice and of a many-layered plot that moves back and forth over events of a decade. Y Is For Yesterday might make you wish the alphabet had a few more letters."--Tampa Bay Times-Review

More Praise for Sue Grafton and the Alphabet Series

"Grafton's endless resourcefulness in varying her pitches in this landmark series, graced by her trademark self-deprecating humor, is one of the seven wonders of the genre."--Kirkus Reviews "Grafton is a writer of many strengths--crisp characterizations, deft plotting, and eloquent dialogue among them--and she has kept her long-running alphabet mystery series fresh and each new release more welcome than the last."--Louisville Courier-Journal "[Grafton's] ability to give equal weight to the story of the detective and the detective story sets her apart in the world of crime fiction."--Richmond Times-Dispatch

Y is for Yesterday is the twenty-fifth in the Kinsey Millhone mystery series by Sue Grafton.

The darkest and most disturbing case report from the files of Kinsey Millhone, Y is for Yesterday begins in 1979, when four teenage boys from an elite private school sexually assault a fourteen-year-old classmate – and film the attack. Not long after, the tape goes missing and the suspected thief, a fellow classmate, is murdered. In the investigation that follows, one boy turns in evidence for the state and two of his peers are convicted. But the ringleader escapes without a trace.

Now, it’s 1989 and one of the perpetrators, Fritz McCabe, has been released from prison. Moody, unrepentant, and angry, he is a virtual prisoner of his ever-watchful parents – until a copy of the missing tape arrives with a ransom demand. That’s when the McCabes call Kinsey Millhone for help. As she is drawn into their family drama, she keeps a watchful eye on Fritz. But he’s not the only one being haunted by the past. A vicious sociopath with a grudge against Millhone may be leaving traces of himself for her to find . . .

Lan the Answer Man
2,0 van 5 sterren Unpleasant and Generally Disappointing
24 augustus 2017 - Gepubliceerd op Amazon.com
Geverifieerde aankoop
I have long been a Sue Grafton fan and have read all of the books in the Kinsey Millhone series.

Nearing her late 70s, Sue Grafton remains a master of the private eye genre. Y Is for Yesterday, however, is disappointing.

The constant flashbacks between 1979 and 1989 become annoying, with information repeated from several different points of view. Most of Grafton's books have Kinsey as the first-person narrator. In this one, supposedly the next-to-last in the series, Kinsey narrates part of the story, but large chunks of it use an omniscient or third-person narrator.

Kinsey herself seems to have lost some of her self-confidence and spunk that has made her such a delightful character. She's constantly fearful of another attack by the man who had tried to strangle her in X (with good reason).

I can't recall another novel in the series that I've enjoyed less. I can only hope that when Z is for Zero comes out it will take us back to the Kinsey Millhone we've known and loved. Grafton certainly still has the talent and ability to do so.

I do admit that the ending of Y Is for Yesterday is, for the most part, satisfying, so that gives me reason for hope that Grafton will wrap up the series in style.

Lee Wall
1,0 van 5 sterren Y is for Yech
30 augustus 2017 - Gepubliceerd op Amazon.com
Geverifieerde aankoop
I had been sad that this series is ending, but after reading this book I feel like it's time for it to go. I've read all the others and was looking forward to the latest installment. I did not, however, enjoy this book. It was dreary and repetitious. The flashback chapters added nothing and I was particularly unhappy that Sue Grafton chose to repeat over and over the graphic content of a tape of sexual abuse. Every time a new person views the tape it gets described, in addition to detailing the actual event in the flashback chapters. There was no justification for this. I found myself skimming large sections of the book just to get through. Also, Kinsey seems awfully stupid in this book. There's a long list of things she didn't think of, notice, or do. I mean, I came up with more ideas, and I'm not a (supposedly) hotshot detective. She just keeps shuffling her index cards, totally clueless. Summing up: unsympathetic characters in an unappealing book in a formerly beloved series.
Meer lezen
181 mensen vonden dit nuttig
Vertaal recensie in het Nederlands

SherriLee
2,0 van 5 sterren Poor example of Grafton's work
24 augustus 2017 - Gepubliceerd op Amazon.com
Geverifieerde aankoop
I feel like this book was totally unedited and anachronisms abounded. First, we have a group of teens, in 1979, who all own VCRs, video cameras, computers and one even has video editing software on his computer??! While the first is justly remotely possible, the others aren't. Kinsey, in 1989, references found footage, hand held type movies which weren't around yet and molded plastic lawn chairs before they were in use. There are many more and it drove me crazy. Plus, Kinsey receives the same information several times from multiple people and doesn't seem to remember that she already knows it. Several chapters were incredibly repetitive. The plot is convoluted and the characters dull or unlikable to the point that I almost stopped reading. There is soooo much filler and random description of meaningless stuff . REALLY-- Penguin needed to clean this book up. I have loved Grafton for years, and continue to do so, as this book was an anomaly, and Kinsey's personality was still fairly vivid, but honestly -- if it had been any other author. I would have tossed it halfway through.
Meer lezen
244 mensen vonden dit nuttig
Vertaal recensie in het Nederlands

Grandma7
2,0 van 5 sterren Not typical Grafton
26 augustus 2017 - Gepubliceerd op Amazon.com
Geverifieerde aankoop
As with all her books, I eagerly awaited "Y". The plot of this one is totally not what I have come to expect from Grafton. I was disappointed at the darkness and explicit details. Grafton doesn't pull it off. Her strong point is how she mixes wit with sarcasm and although she is solving a crime, her books were always an interesting, quick read and good for lots of laughs. But because the subject matter of this novel was a rape, the humor felt wrong after hearing the graphic details. And those details were given time and time again. I was surprised she felt the need to be so descriptive over and over again. Where was all the banter between her and Henry, Rosie, Jonah and Cheney? That's what she does best. None of the other characters were likeable and after awhile I didn't feel sorry for any of them, teens and parents alike. If this had been written earlier in the alphabet, I would not have continued to read the rest and would not have recommended this series to so many people. With only one book left, I expected Grafton to start tying up loose ends so that we would be excited to see how things would be finalized in "Z". Now I am afraid the ending is going to be a disappointment!

Side note: all of the so-called big name authors Grisham, Patterson, Follett, Evanovich, Woods, Silva, Grafton and many others seem to be trying to pump out as many novels as possible. The quality and content of most recent books have been repetitive, boring and lack the depth of previous ones. I will not be pre-ordering any more novels until I can read the reviews.
Meer lezen
44 mensen vonden dit nuttig
Vertaal recensie in het Nederlands
Ga naar Amazon.com om alle 3.333 recensies te bekijken 4,3 van 5 sterren
Terug naar boven
Over ons
Verkoop bij ons
We helpen je graag
© 1996-2020, Amazon.com, Inc. en dochterondernemingen