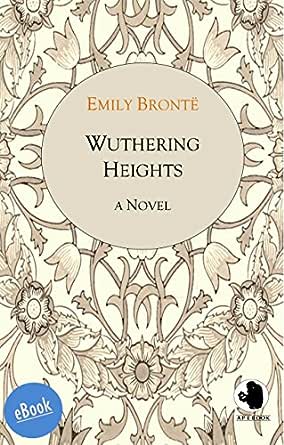 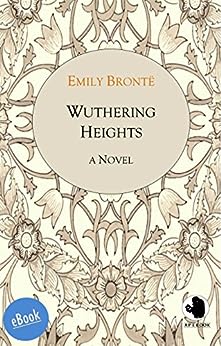 "Wuthering Heights" is the only novel of English author Emily Brontë (1818-1848). It was first published in 1847, though under the author´s pen name Ellis Bell.

Mr. Earnshaw finds a presumably orphaned boy on the streets of Liverpool and takes him to Wuthering Heights. There the boy, who is named Heathcliff then, grows close with Earnshaw´s daughter Catherine. When they have become young adults, there is a deep love between them. But one day Edgar Linton, a young man of higher social status, proposes marriage to Catherine. The young woman makes a fatal decision.

Although contemporary critics considered the novel controversial because of its mental and physical cruelty, nowadays "Wuthering Heights" is a classic of 19th century literature. Some argue that the novel is even superior to Jane Eyre, which is also one of the most-loved novels ever. There are several dramatic adaptations of Wuthering Heights, including film, radio, TV, opera and music.

“A fiend of a book — an incredible monster […] The action is laid in hell, — only it seems places and people have English names there.” Dante Gabriel Rossetti

“A monument of the most striking genius that nineteenth-century womanhood has given us.” Clement Shorter

“The greatest work of fiction by any man or woman Europe has produced to date.” Anthony Ludovici

“Emily was inspired by some more general conception. […] She looked out upon a world cleft into gigantic disorder and felt within her the power to unite it in a book.” Virginia Woolf
click to open popover

View from the hills
5,0 van 5 sterren As revelant today as in 1847, readers either love of hate this haunting book....but they never forget it!
12 mei 2018 - Gepubliceerd op Amazon.com
Geverifieerde aankoop
There is something about this book that draws you in even though most of the characters are self-centered and malicious and you tend not to like them. The current of love, lust, and possession runs throughout the story which is told to the new renter of "The Grange" by the housekeeper of Wuthering Heights. As she sits and knits she spins the tale of the tempestuous love story of Cathy and Heathcliff, slowly but surely you are pulled in to all the machinations that the Lintons and Earnshaws and the orphan Heathcliff engage in across the cold, damp, windswept moors of the Yorkshire estate. Your mind becomes filled with Heathcliff, always Heathcliff, watching planning and deeply in love with Cathy. The story follows their lives through two generations.

As a reader, I have to wonder what state of mind Emily Bronte was in when she wrote the turbulent tale. Published in 1847 the story was considered lurid and shocking, but a masterpiece. It is Bronte's only novel and is as relevant today as it was back then. Emily Bronte had been ill for some time and died in December of 1848.

Happy Shopper
5,0 van 5 sterren A timeless classic
25 april 2017 - Gepubliceerd op Amazon.com
Geverifieerde aankoop
A timeless classic. I read this book a long time ago and decided to read it again. Enjoyed it even more as a more mature women. :-) It's a sad story that makes you feel sorry for many of the characters but it's a good escape back to a time and place so different from where we are now.
Meer lezen
39 mensen vonden dit nuttig
Vertaal recensie in het Nederlands

plrivers
5,0 van 5 sterren A Must Read At Least Once In Your Life; I Am Still Compelled To Read It Once A Year!
4 februari 2019 - Gepubliceerd op Amazon.com
Geverifieerde aankoop
One of my favorite classics... it was my introduction to Victorian tragedy. Ego keeps them apart until the cliffs in the heather moores bring them back together. My highschool English teacher, who just happened to be my mother's highschool English teacher, retired the year I had him. At the end of school that year, he gave me the only copy of this story he had ever used, throughout his entire teaching career. And that was a hundred years ago, in the 90's. It's still my most cherished possession! In it's cover he wrote "To PL, who has unraveled me more than this book can ever show."

Though it may seem over-dramatic to some, think of it more as a view into the harsh reality of the Victorian mindset: the fear of miasma, and now possibly water, causing death; the brutality afflicted by the upper classes; the few amongst them who were truly good and brought hope, even sometimes offering a step up to the next rung in a ladder; the quickness with which a family's status could rise and fall; the fact that death and loss were every day realities; but most importantly, the tragedy of love itself, in an Era divided by the haves and have nots.

Gautner
2,0 van 5 sterren Great Idea, Terrible Execution (Chinese production, so no pun intended)
2 november 2019 - Gepubliceerd op Amazon.com
Geverifieerde aankoop
They look pretty on the website, but these editions are printed in Communist China where the entire government is one massive, human rights violation. Skip this edition and buy the Everyman's edition of the same book that is printed in Germany (ASIN - B007M81R00). Part of the marketing claim for these versions is that because they are a limited run, they will be regarded as collectable in time. That's unlikely for a Chinese print of a Western Classic. If you want a collectable copy, shop Abebooks (still an Amazon company). Such a disappointment because this idea of printing classics by season is such a good idea.
Meer lezen
10 mensen vonden dit nuttig
Vertaal recensie in het Nederlands
Ga naar Amazon.com om alle 1.601 recensies te bekijken 4,2 van 5 sterren
Terug naar boven
Over ons
Verkoop bij ons
We helpen je graag
© 1996-2020, Amazon.com, Inc. en dochterondernemingen