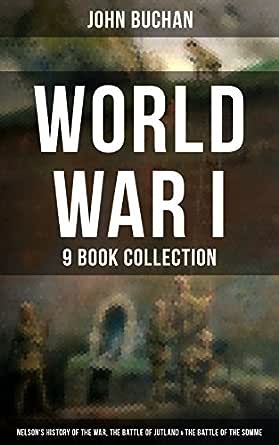 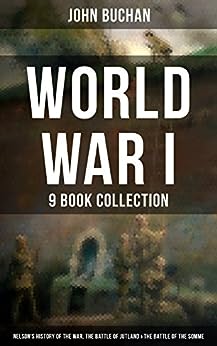 World War I - 9 Book Collection: Nelson's History of the War, The Battle of Jutland & The Battle of the Somme: Selected Works from the Acclaimed War Correspondent ... Experience During the War (English Edition) Kindle-editie

This carefully edited collection has been designed and formatted to the highest digital standards and adjusted for readability on all devices. The edition incorporates an interactive table of contents, footnotes and other information relevant to the content which makes the reading experience meticulously organized and enjoyable. Table of Contents: Days to Remember: The British Empire in the Great War The Battle of Jutland The Battle of the Somme, First Phase The Battle of the Somme, Second Phase Nelson's History of the War (Volumes I–V) "The definite history of this war is not now to be written, or for many a day. Still it may be possible to disentangle from this struggle of armed nations over hundreds of miles some explicit narrative which may help all of us who are hungering for help and guidance. At present we do not authentically know even the subtle causes which produced this convulsion over half the world. What is on the surface is clear enough, but it is what is under the surface that matters. I am reluctant to believe in a diabolical and cold-blooded scheme to bring about war at this time; at least, this does not seem to be proved. We must, then, I think, suspend our judgment as to the real causes of war till time and documents give us the clue. Perhaps the pregnant word "mobilization" may explain much. Meanwhile we can only conjecture by the light of a few facts..." (Excerpt; Nelson's History of the War) John Buchan (1875-1940) was a Scottish novelist, historian and also served as Canada's Governor General. With the outbreak of the First World War, Buchan worked as a correspondent in France for The Times.
click to open popover

G. E. Druce
3,0 van 5 sterren Extensive, Detailed, British Viewpoint
11 januari 2018 - Gepubliceerd op Amazon.com
Geverifieerde aankoop
I found these books interesting. They are written from the British point of view; a balanced understanding of the First World War would require reading similar accounts from the viewpoint of the other combatants. I have bicycled over the Ypres sector and my direct knowledge of that terrain sent me scurrying for a really good atlas to better understand the accounts of activity in other sectors. I found the inclusion of original reports from the commanding officers added to my understanding of the War. At the end of the day, the great lesson of the First World War was that static wars of attrition are measured in feet and yards that are shockingly small when compared to the number of casualties. The collection of books moves its narrative in a detailed and measured manner that, while I found it valuable, I suspect many, probably most, will find tedious. They will be better served by more compact and more balanced accounts. Hence my three star rating. The audience for this collection of books will justifiably be smal and specialized.
Meer lezen
6 mensen vonden dit nuttig
Vertaal recensie in het Nederlands

Hakej
5,0 van 5 sterren Must read for the WWI History Buff
11 januari 2018 - Gepubliceerd op Amazon.com
Geverifieerde aankoop
This book is not for the casual reader of WWI history, as it focuses in great detail mostly, although far from entirely, on the British forces. But for the History buff, it's a must read. Very well written, documented and illustrated (excellent maps), it will keep you fascinated for endless hours and give you a great sense of the entire war from a distinctly British perspective.
Meer lezen
2 mensen vonden dit nuttig
Vertaal recensie in het Nederlands

RLS
5,0 van 5 sterren Find out WW I from the English perspective
22 mei 2019 - Gepubliceerd op Amazon.com
Geverifieerde aankoop
I disliked that the author assumes I know the slang of World War One and often just had to plow through and understanding would come latter. What can you do the books were written almost as a journal of the war as it was progressing at the time. The preceding is also why I liked it, it gave me a bit of feel for the time and the casual horror of the war. Losing a few thousand men with the whisk of a broom. Understanding the dislike for the other.
Meer lezen
Vertaal recensie in het Nederlands
Ga naar Amazon.com om alle 22 recensies te bekijken 3,6 van 5 sterren
Terug naar boven
Over ons
Verkoop bij ons
We helpen je graag
© 1996-2020, Amazon.com, Inc. en dochterondernemingen