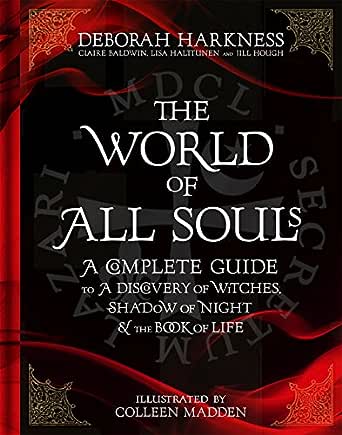 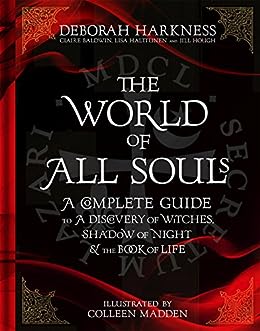 The World of All Souls: A Complete Guide to A Discovery of Witches, Shadow of Night and The Book of Life (All Souls Trilogy Guide) (English Edition) Kindle-editie

Praise for Deborah Harkness and the All Souls Trilogy "Packed with gorgeous historical detail and a gutsy, brainy heroine to match . . . Harkness writes with thrilling gusto about the magical world." --Entertainment Weekly "Wonderfully imaginative grown-up fantasy with all the magic of Harry Potter or Twilight . . . An irresistible tale of wizardry, science, and forbidden love." --People "Romantic, erudite, and suspenseful . . . Harkness attends to every scholarly and emotional detail with whimsy, sensuality, and humor." --O, The Oprah Magazine

"Enchanting, engrossing, and impossible to put down." --Miami Herald "Completely bewitching . . . Harkness works her own form of literary alchemy by deftly blending fantasy, romance, history, and horror." --Chicago Tribune "A big supernatural canvas . . . ranging across history and zeroing in on DNA, human and otherworldly. Age-old tensions between science and magic and between evolution and alchemy erupt as Diana seeks to unlock the secrets of Ashmole 782." --Los Angeles Times "The charm in Deborah Harkness's wildly successful All Souls trilogy lies not merely in the spells that its creature characters cast, but in the adroit way she has insinuated her world of daemons, witches, and vampires into ours. . . . Harkness casts her own indelible spell of enchantment, heartbreak, and resilience." --The Boston Globe "Deborah Harkness takes us places we've never been before. . . . Lucky for us." --USA Today "A stirring, poignant saga." --Us Weekly

Discover the truths, the history, the myths and the magic behind the bestselling All Souls trilogy. Fall under the spell once more with this all-encompassing insider's guide to A Discovery of Witches, Shadow of Night and The Book of Life.

The All Souls trilogy by Deborah Harkness, featuring historian and witch Diana Bishop and vampire scientist Matthew Clairmont, delves into mythology, alchemy, literature and architecture. And history is brought to life. With her signature historian's touch, Deborah Harkness offers an encyclopaedic look at the series, complete with synopses, character biographies, maps, recipes, and even the science behind creatures, magic and alchemy.

Bursting with fascinating facts and original artwork, The World of All Souls is the ultimate companion for fans of the All Souls trilogy and unlocks this fantastical world, letting you in on all its secrets and mysteries.

Praise for the All Souls trilogy:

'This is a glorious, finely-wrought gem of a book: intelligent, thoughtful, intricate. . . Utterly enchanting on every level' Manda Scott on A DISCOVERY OF WITCHES

'Rich in arcane detail, fans will relish this exotic cauldron of romantic fantasy' Sunday Mirror on THE BOOK OF LIFE

L. M Young
5,0 van 5 sterren Your Guide to the "All Souls" World
18 juni 2018 - Gepubliceerd op Amazon.com
Geverifieerde aankoop
This is a gorgeous companion book to Deborah Harkness' "All Souls" trilogy, A DISCOVERY OF WITCHES, SHADOW OF NIGHT, and THE BOOK OF LIFE. As such, it is tremendous. If you have no interest in the books, you probably won't be a fan of this volume either. For trilogy fans, you have a treat awaiting!

After an interview with the author and synopses of all three books, Harkness describes the different "creatures" of her universe (humans, witches, vampires, and daemons) and a listing of the characters follow. Then the real treat comes: we learn the history behind the organizations and locations of the story, an explanation of magic and witchcraft lore as portrayed in the book, a history of Matthew Clermont, and sections on alchemy, decorative arts, and lifestyles in the series. The book ends with a list of books important to the series and translations of foreign words used.

Some companion books for series are so much rehashing of plots and fluff like recipes (okay, there are recipes in this book, but only eight pages out of 483); this one is a real treat because of the research Harkness put into the books and which is passed on in this volume. All this and there are deleted chapters from the books that were cut in the interest of moving the plot along, and also beautiful pen-and-ink wash illustrations throughout the text of characters, places, and items, along with photographs and maps, plus some color inserts. Truly a must for All Souls fans, especially if you are a history or fantasy buff.

Avalon100
5,0 van 5 sterren Clarifying the world of Diana and Matthew
17 juni 2018 - Gepubliceerd op Amazon.com
Geverifieerde aankoop
Background companion to the All Souls trilogy. I have listened to the trilogy at least a dozen times now and I still hear something new each time I listen. This book helped to fill in areas where I didn't realize there was a blank area! I love how the conversation between Matthew and Dimenico was given more attention. I can't wait for the next book to come out so we can find out more about Marcus. I highly recommend this book for anyone who was enchanted by A Discovery of Witches like I am.
Meer lezen
30 mensen vonden dit nuttig
Vertaal recensie in het Nederlands

Sheryl Rentschler, author
5,0 van 5 sterren What a compendium!
22 september 2018 - Gepubliceerd op Amazon.com
Geverifieerde aankoop
I adore this book. I loved the series A Discovery of Witches and the fantasy and history surrounding the characters. I love the real places and how the author wove her story into real events. For me, that is real talent. This book shares background and history, character revelations and answers all the questions I had during Harkness' most excellent series. This was worth every penny and I will refer to it often going forward. It will help when the TV series comes out too (because you know TV can't explain everything, but this book does). The other nice thing is as I prepare to re-read the series, now I have answers I missed before. Excellent.
Meer lezen
19 mensen vonden dit nuttig
Vertaal recensie in het Nederlands

S Goodwin
5,0 van 5 sterren Fascinating, invaluable, riveting, must have if you have read this author’s previous books!
22 november 2018 - Gepubliceerd op Amazon.com
Geverifieerde aankoop
This is NOT my genre when it comes to reading, but I got hooked when I read the first book, The Discovery of Witches, patiently waited for the next releases and fell asleep reading in bed with the books, my glasses still on and sitting propped up. This series is so incredible I read the books a second time start to finish. I was thrilled when I discovered the guide. I would recommend you purchase The Complete Guide only if you have read the Trilogy, the 4th book or have plans to, it is fascinating and invaluable!
Meer lezen
15 mensen vonden dit nuttig
Vertaal recensie in het Nederlands