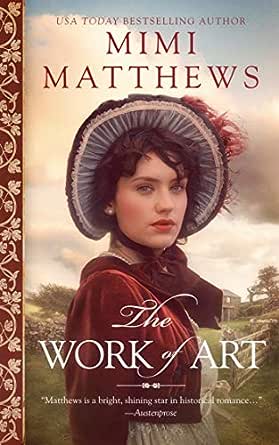 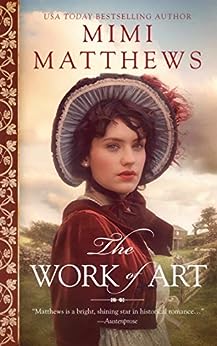 The Work of Art: A Regency Romance (English Edition) Kindle-editie

"In her sixth historical romance, Matthews (The Pug Who Bit Napoleon; A Victorian Lady's Guide to Fashion and Beauty) weaves suspense and mystery within an absorbing love story. Readers will be hard put to set this one down before the end. Highly recommended to historical romance and/or mystery buffs and especially animal lovers." -Library Journal, starred review

"The author seamlessly combines a suspenseful tale and a soaring romance, the plot by turns sweetly moving and dramatically stirring...A thoughtfully executed tale that perceptively dramatizes the tension between the demands of love and commerce." -Kirkus Reviews

"A story as beautiful, atmospheric, and arresting as its haunting cover...In its pages are romance, adventure, bravery, and humor...and my absolute favorite--the universal themes of courage, loss, and restoration. I highly recommend this enchanting and thought-provoking novel for your Summer 2019 to-read list." -Austenprose

"Truly a work of art...when it comes to this book, romance and suspense are a match made in heaven." -Bookstr (Five of the Hottest Romance Novels this Side of the Web)

"If all Regency Romances were written as well as 'The Work of Art, ' I would read them all...[Matthews] has a true gift for storytelling." -The Herald-Dispatch

USA Today bestselling author Mimi Matthews writes both historical non-fiction and proper historical romances set in Victorian England. Her articles on nineteenth century history have been published on various academic and history sites, including the Victorian Web and the Journal of Victorian Culture, and are also syndicated weekly at BUST Magazine. In her other life, Mimi is an attorney. She resides in California with her family, which includes an Andalusian dressage horse, two Shelties, and a Siamese cat. --Deze tekst verwijst naar de paperback editie.

OLT
4,0 van 5 sterren Lovely. I needed this.
24 juli 2019 - Gepubliceerd op Amazon.com
Geverifieerde aankoop
It's becoming harder and harder to find really good freshly-written HRs. A shame, because HRs are my chosen escape-from-reality read, something I'm needing more and more lately whenever I crawl out from under that rock where I've been hiding to escape the never-ending depressing news cycles. So hallelujah, and thanks, Ms Matthews. For a brief moment I was lost in the world of a delightful Regency romance, with really charming main characters and a heartwarming romance.

The plot is not anything new. Lovely innocent young woman from Devonshire, alone in the world after the death of her grandparents, is brought to London by distant and unaffectionate relatives who are hoping to get her married off ASAP. She is uncomfortable with their choice, an older, cold, and uncharismatic duke known as The Collector because of his obsession with acquiring unique treasures. And our heroine Phyllida is just such a unique treasure. She's lovely. But more than that she's heterochromatic, with one blue eye and one amber. She has been given the nickname The Work of Art because of this and the duke is set on her for his new wife. And her relatives are looking forward to the money they will receive for this marriage transaction.

Then we have our hero, Captain Arthur Heywood. He's a Peninsular War hero, wounded so badly that he can no longer walk without a cane, is never free of pain and suffers from PTSD. He's almost a recluse but has been forced to London by his father to check out a possible business investment with Phyllida's uncle. So he and Phylly meet and become friends. I'll not say more about this because it pretty much goes along as you would expect with perhaps only a few surprises.

The plot's not really the thing, anyway. It's the romance. It's the truly appealing hero and heroine. It's the way their friendship develops into love. These two characters were perhaps too good to be true, but I needed to meet some really good people at the moment, even if they were fictional. And they are perfect for each other. Phylly is a kindhearted country girl at heart. She's not fond of the social life in London. Arthur, especially since his injuries, is not interested in the city and its social life either.

Phylly has a compassionate heart. She can't stand by if she sees a way to give help or support in any way, as is evidenced by her motley crew of dogs who came to London with her, most formerly abused, one with only three legs. Captain Heywood is an honorable man, albeit a reticent, reclusive one. So I sat back, Kindle in hand, to see how these two would deal with each other. Both need a rescue. Phylly from her unkind family and that unwanted marriage, and Arthur needs healing to feel like a whole man, in spite of the limitations of his injuries. To take a line from the movie Jerry Maguire, these two complete each other. And they communicate. Yes, there is actual communication. There are misunderstandings but author Matthews doesn't allow these to fester. They are almost immediately addressed in conversations. Nicely done!

I can't quite say that this is a 5-star book. I did not appreciate the heroine's TSTL moment near the end. It was necessary, I suppose, so that the hero could do what he did to remedy the situation. But still...I'm not fond of TSTL actions. Nonetheless, this is a great little romance and hit the spot for me.

K. Howard
5,0 van 5 sterren Mimi Matthews is not to be missed!
23 juli 2019 - Gepubliceerd op Amazon.com
Geverifieerde aankoop
I am a voracious reader of historical romance. I believe Mary Balogh, Grace Burrowes and Lisa Kleypas are the queens of this genre. And now Mimi Matthews has joined that exalted group. Her beautiful novels draw me right in and I can't get anything done until I'm finished reading. This book is particularly engaging and so, so romantic!

Phyllida Satterthwaite and her four beloved dogs now live in London with her stern uncle, hateful aunt and irritating cousins after the death of her grandfather. She has different colored eyes, which draw much attention. When her uncle has potential business partners at the home, she meets Captain Arthur Heyward, a former cavalry officer who was grievously injured in the war; he cannot walk without a cane and suffers severe pain. Philly really clicked with the gruff, unsmiling Arthur and they become friends. She didn't look at him with pity, and when she thought he needed help or was in pain, she helped him without being obvious and drawing attention to him. Her uncle wishes her to meet a Duke, who is interested in Philly because he believes she is a work of art with her unusual eyes. She didn't like this Duke at all. However, she finds her uncle has essentially sold her to him and demands she marry him. Frightened of the rumors about the Duke, she leaves her home with Arthur; he decides the only way he can protect her is to give her his name.

The relationship between Philly and Arthur was just beautiful! They started as friends, with the intention that their marriage would be in name only. That was not to be; a quiet romance built quickly between them. Philly was a sweet, caring woman with a big heart, evidenced by the care she gave her wayward pets...and Arthur. Arthur still suffered from his pain and injuries, feeling frustrated that he couldn't do the things he used to do. When it appeared that someone was trying to hurt Philly, he would do everything he could to protect her. Though intimacies were behind closed doors, the story was still very sensual and the love palpable. I can't express just how much this book touched me. Ms. Matthews can't write fast enough for me.

I received an ARC of this book courtesy of the publisher and NetGalley. I received no compensation for my review, and all thoughts and opinions are entirely my own.
Meer lezen
38 mensen vonden dit nuttig
Vertaal recensie in het Nederlands

KMS
3,0 van 5 sterren Could have been much better
9 september 2019 - Gepubliceerd op Amazon.com
Geverifieerde aankoop
I was disappointed by this book. The set-up was magnificent. A creepy Duke known as the Collector wants the girl with mismatched eyes. A horrible “Uncle” who intends to essentially sell her for quite the profit. Miserable cousins who knew of their father’s plot but did not warn her. Servants who willingly trap Philly in the house. And the handsome, wounded Captain Heyworth... seriously this story should have been amazing.
And yet, once Heyworth and Philly escape London, the entire story fizzles. First, this is not a bodice ripper. And frankly that was fine with me. I usually skip the sex scenes as boring, but if you aren’t going to write a good sex scene, you need to give the reader a good sense of the tension and passion. This book was as tame as one of my mom’s old Barbara Cartland novels. Second, there was no reckoning for her faithless cousins. Those girls needed a drubbing . Finally, the mystery falls flat until the very end. The wounded hero trope, the man who refuses to sleep by his wife side at night because he might hurt her during flashbacks, has been done 1 million times.
Great ideas to start but a tedious 2nd half. Doubt I’ll read this author again.
Meer lezen
20 mensen vonden dit nuttig
Vertaal recensie in het Nederlands
Ga naar Amazon.com om alle 194 recensies te bekijken 4,7 van 5 sterren
Ontdek het beste van shopping en entertainment
Gratis en snelle bezorging van miljoenen producten, onbeperkt streamen van exclusieve series, films en meer
> Ontdek Prime
Terug naar boven
Over ons
Verkoop bij ons
Amazon-betaalmethoden
We helpen je graag
© 1996-2020, Amazon.com, Inc. en dochterondernemingen