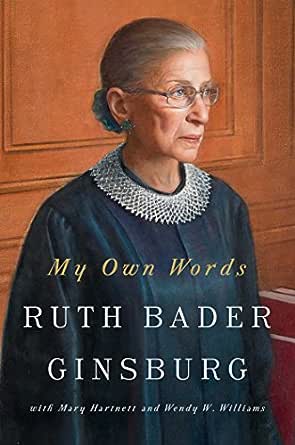 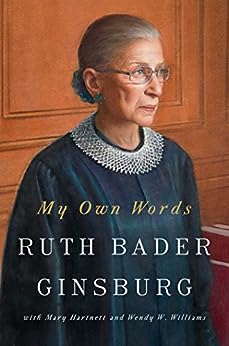 My Own Words (English Edition) Kindle-editie

The New York Times bestselling book from Supreme Court Justice Ruth Bader Ginsburg—“a comprehensive look inside her brilliantly analytical, entertainingly wry mind, revealing the fascinating life of one of our generation's most influential voices in both law and public opinion” (Harper’s Bazaar).

My Own Words “showcases Ruth Ginsburg’s astonishing intellectual range” (The New Republic). In this collection Justice Ginsburg discusses gender equality, the workings of the Supreme Court, being Jewish, law and lawyers in opera, and the value of looking beyond US shores when interpreting the US Constitution. Throughout her life Justice Ginsburg has been (and continues to be) a prolific writer and public speaker. This book’s sampling is selected by Justice Ginsburg and her authorized biographers Mary Hartnett and Wendy W. Williams, who introduce each chapter and provide biographical context and quotes gleaned from hundreds of interviews they have conducted.

Witty, engaging, serious, and playful, My Own Words is a fascinating glimpse into the life of one of America’s most influential women and “a tonic to the current national discourse” (The Washington Post).
click to open popover

Ronald H. Clark
5,0 van 5 sterren Ruth Bader Ginsburg Speaks for Herself
15 oktober 2016 - Gepubliceerd op Amazon.com
Geverifieerde aankoop
We have recently been treated to a host of books and articles on Justice Ruth Bader Ginsburg. Forthcoming is an authorized biography by the two Georgetown Law professor editors of this collection of Ginsburg writing, as well as one by Teri Kanefield. In my opinion, no matter how many bios and articles you read about the Justice, your understanding of this remarkable lawyer and judge will be incomplete if you don't also review this collection of material authored by the Justice, spanning her life since the eighth grade. I really felt I came closest to understanding both the professional and personal Ginsburg from this book.

The book has many merits. It affords an insight into how the Supreme Court operates and decides cases; provides us with highly personal and quite moving profiles of Chief Justice Rehnquist and her great friend--and adversary--Justice Scalia; reminds us of her pioneering role as the champion of women's rights as author, professor, and deadly litigator; and not least, helps us understand the private Ginsburg through several appearances by her late husband, tax lawyer Marty Ginsburg. Ginsburg speaks for herself in 36 or so pieces, skillfully tied together and placed in context by the two editors.

The book is divided into five sections. For example, "Early Years" surprised me with a Ginsburg essay written while an undergrad at Cornell on the evils of wiretapping, reflecting the influence of her mentor, the constitutional scholar Robert E. Cushman. In Part Two, "Tributes to Waypavers and Pathmarkers," Ginsburg reveals a remarkable talent for writing short profiles of prominent legal and judicial figures, including Belva Lockwood, Louis Brandeis, Judah P. Benjamin (a fascinating figure; look him up), Breyer, Cardozo, and especially Sandra Day O'Connor. Nobody can pack more info into a short piece than Ginsburg.

The central focus of her professional career as advocate and judge, gender equality, is the focus of Part Three. Symposium introductions; defense of the ERA; her bench announcement in the VMI case; and several summer presentations to summer law students abroad make up this section. One should never forget the impact her unceasing determination had in moving the whole idea of gender equality into the spotlight. Ironically, as is well known, she remains unhappy with the Roe opinion, preferring not to rest it upon privacy but upon straight equality grounds. Part IV has some interesting material on her role as a judge and appointment to the Court.

The final section provides an insight into her views of judging and justice. She explains the Court's workways and why she is so dedicated to judicial independence. She defends effectively the role foreign legal concepts can play for the Justices--a hot item with Scalia, while being promoted by Breyer. She articulates the idea of "measured motions," which basically means don't go too far in an opinion in pushing a point. Most interesting, she explains her view of dissents and dissent announcements, an unusual practice in which she has recently engaged. Finally, she shares her most recent second circuit report on Supreme Court highlights for the 2015-16 term; she gives such reports each year and it is quite interesting to read her candid comments.

One of the major reactions I came away with is how well she can write in no matter what format--a point quite obvious from her incisive opinions. The book runs some 370 pages, including chronology, helpful photos, notes and index. My only problem with the book is that the editors have chosen to relegate most notes (which I read religiously) to a webpage (see "A Note on Sources"). No matter how hard I tried, i could not locate these notes, and I am inclined to think such a separation of notes from text is not a good idea for it diminishes the ability to ingest the notes as you read. But the book itself is magnificent, whether you are a Ginsburg fan or not. At 83, this veteran of cancer flirtations, wars with Scalia, and many hard battles, has said she will remain on the Court as long as she meets her own stringent standards. For that, we can all be thankful.
Meer lezen
174 mensen vonden dit nuttig
Vertaal recensie in het Nederlands

David Allen
5,0 van 5 sterren RBGs first book as a judge on the Supreme Court - interesting read!
13 oktober 2016 - Gepubliceerd op Amazon.com
Geverifieerde aankoop
First I'd say that I'm a moderate in my political views and with this book you do not need to be a liberal to enjoy it. I've been a fan of Ruth Ginsburg since her appointment in the 90s. Her tell of being the 2nd woman appointed and her relationship with Justice O'Connor and the friendship with the late Justice Anthony Scalia. There are funny parts to the book detailing her wit and charm. It was amazing to find out that she sleeps very little when in court is in session and that she doesn't cook (her family prepares homemade frozen entrees for her). The book is 400 pages long but well laid out and allows the reader to skip around and read at your leisure. There are a few black and white pictures and pictures on notes she wrote. I usually only read digital books these days but this is a nice book to own and keep in your library. I hope you enjoy it as much as I did!
Meer lezen

Duffsgal
3,0 van 5 sterren Attorneys Should Find This Book Worthwhile
27 september 2017 - Gepubliceerd op Amazon.com
Geverifieerde aankoop
Members of the legal profession are likely to get more from this book than those who are not. Our book club, comprised of many professions, divided along these lines. Many redundant areas - if you're not seeing the legal specificity. Very interesting on the personal level and for the cogency of her remarks given in a wide variety of venues. Understanding the trajectory of her career is awe inspiring, as is the familial relationships.
Meer lezen
34 mensen vonden dit nuttig
Vertaal recensie in het Nederlands

M Hill
5,0 van 5 sterren Inspiring, touching, a glimpse into an amazing life of public service.
6 juni 2018 - Gepubliceerd op Amazon.com
Geverifieerde aankoop
Inspirational. Ruth Bader Ginsburg is a force of nature -- and all Americans owe her a big debt of gratitude for what she has done to uphold democratic principles. She is absolutely tireless, exists on very little sleep, survived 2 different types of cancer, and works out with a trainer to keep fit at age 84 and counting.
Meer lezen
24 mensen vonden dit nuttig
Vertaal recensie in het Nederlands