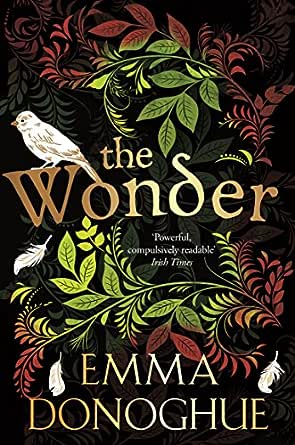 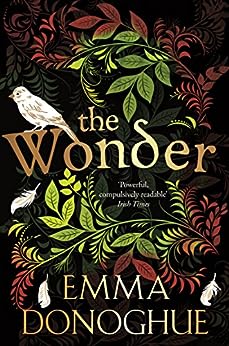 "[Donoghue's] contemporary thriller Room made [her] an international bestseller, but this gripping tale offers a welcome reminder that her historical fiction is equally fine."--Kirkus Reviews (starred review)

"Donoghue demonstrates her versatility by dabbling in a wide range of literary styles in this latest novel.... The closely imagined, intricately drawn story possesses many of the same alluring qualities as her bestseller, Room. .... Donoghue's engrossing novel is loaded with descriptions of period customs and 19th-century Catholic devotional objects and prayers...[and] asks daring questions about just how far some might go to prove their faith."--Publishers Weekly (starred review)

"Donoghue is known for her bestselling novel, Room.... [But] she is also well versed in historical fiction. THE WONDER brings together the best of all, combining a gracefully tense, young voice with a richly detailed historical setting."--The Millions

"Readers of historical fiction will gravitate to this tale."--Mary Ann Gwinn, Seattle Times

"A riveting allegory about the trickle-down effect of trauma."--Megan O'Grady, Vogue

"Donoghue poses powerful questions about faith and belief all the while crafting a compelling story and an evocative portrait of 19th-century Irish provincial society."--Tom Beer, Newsday

"Donoghue's superb thriller will keep readers hanging on to every word, pondering how far one will go to prove her faith."--Liz Loerke, Real Simple

"What at first seems a simple matter becomes far more-stick with it, the payoff is there."--Steph Opitz, Marie Claire

An eleven-year-old girl stops eating, but remains miraculously alive and well. A nurse, sent to investigate whether she is a fraud, meets a journalist hungry for a story . . .

Set in the Irish Midlands in the 1850s, Emma Donoghue's The Wonder – inspired by numerous European and North American cases of 'fasting girls' between the sixteenth century and the twentieth – is a psychological thriller about a child's murder threatening to happen in slow motion before our eyes. Pitting all the seductions of fundamentalism against sense and love, it is a searing examination of what nourishes us, body and soul.

Barbara Sutton
5,0 van 5 sterren A Perfect Storm
12 oktober 2016 - Gepubliceerd op Amazon.com
Geverifieerde aankoop
The Wonder by Emma Donoghue is a masterfully written mystery, and the detective is a young English nurse who has been hired to come in as an outside observer to determine the validity of the claim of a rural Irish family that their eleven year old daughter has taken no food for four months, and yet, is miraculously thriving. This nurse, Lib, expresses well the prejudices of the English towards the Irish and their beliefs. (The novel takes place not long after the end of the Great Potato Famine, and so there are intense feelings between the two cultures.) The focus of the story is on a young girl, Anna, who is seen locally as being specially blessed by God, and yet, as the story unfolds we come to see that she represents a perfect storm of pressures arising from devotion to God and religious fanaticism, love of family and family dysfunction. Lib, as a well-trained nurse, arrives with total skepticism, assuming that the child herself is perpetuating this hoax, but Anna's simplicity and purity of heart gradually win Lib over. The challenge then becomes: How to keep this child alive? As with all good mysteries, just about every character has ulterior motives of one kind or another to want the phenomena to be real... the priest, the doctor, the innkeeper, the parents. It is only the trust that slowly builds between Lib and Anna that creates a ray of hope. So much happens towards the end of the book that I was transfixed. The book gave me much to ponder about how children are influenced, for good or ill, by those around them. After finishing it, I immediately went back to read the last three chapters again so I could better appreciate all that contributed to Anna's dire situation. I happen to be a child psychologist, so these issue matter to me, but I think Donoghue's novel will have wide appeal. This is a very worthwhile read.
Meer lezen
170 mensen vonden dit nuttig
Vertaal recensie in het Nederlands

SassyPants
5,0 van 5 sterren The Wonder is Wonderful!
30 december 2017 - Gepubliceerd op Amazon.com
Geverifieerde aankoop
This book is a delight to read on so many levels. The story is compelling and interesting and the writing is very good. In addition to containing a disturbing mystery, the novel poses questions about medical ethics and morality. A good book makes you think and I am still thinking about this one a few days after finishing.

The story is set in southern Ireland in 1859, over the period of two weeks. Lib is a widow who became a nurse after her husband of one year died. She was a Nightingale, as in trained by Florence, and was working in a hospital in England after the Crimea War. Her matron suggested Lib travel to Ireland to be a nurse in the O’Donnell household for two weeks. She agrees, but nothing is as she anticipated. Lib has been hired by a committee of townsfolk to “observe” 11 year old Anna O’Donnell for two weeks. The child has not eaten in 4 months and the committee wants to know if this is a hoax or divine intervention as the family claims. The child reports that she receives manna from heaven. People come from all over to see the devoutly religious miracle child. Lib and a local nun are to take shifts and simply observe to see if the child is taking in any food. Lib is out of place in Catholic Ireland and is convinced that the whole thing is a trick. She is a firm believer in facts and science and has nothing but disdain for religion. As she spends time with Anna, an unlikely friendship develops. Lib remains very skeptical of the family and some of the townspeople. She is befriended by a newspaper reporter sent there to cover the story. Together, they begin to discover the horrible truth. As Anna’s health begins to fail, Lib begs the local physician and the committee to end the watch period and intervene. She soon discovers that everyone has their own agenda, including building up the local church if Anna is declared a saint. Lib knows that she needs to act fast, but she is torn between duty and love.

There are so many lovely layers to this novel. The characters have hidden secrets, some of them quite horrifying. It is chilling to learn how far people will go to further their own desires. Far enough to endanger the life of a child and to convince her that she is doing the right thing by starving herself. There are themes of guilt, family loyalty, the goodness and dangers of religion, misperceptions and assumptions, and medical and moral ethics. The story is a slow burn that builds to some startling conclusions. The book is hard to put down and well worth your time.
Meer lezen
19 mensen vonden dit nuttig
Vertaal recensie in het Nederlands
Ga naar Amazon.com om alle 601 recensies te bekijken 3,9 van 5 sterren
Terug naar boven
Over ons
Verkoop bij ons
We helpen je graag
© 1996-2020, Amazon.com, Inc. en dochterondernemingen