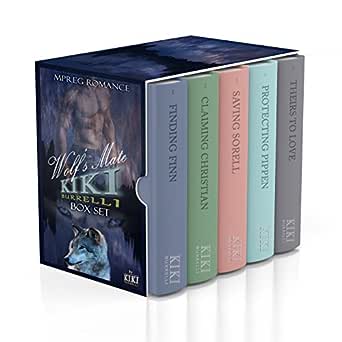 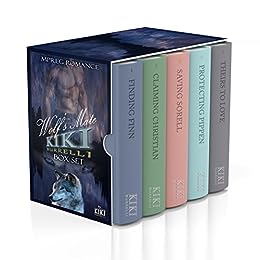 Five fun romantic stories of finding fated love and starting a family. Follow these sexy alphas as they do what it takes to claim their mates. From a young man trying to find his way in life to a dangerous shifter with a dark past who needs saving from himself, these five full-length stories will introduce you to a world of dominant wolves and their mates.

Fresh out of the institution, Finn's ready to crawl back up and reclaim life. He'll stick to his plan and get back into grad school. That’s all he thinks about until he meets his new roommate the older, intimidating Luke.

Kicked out of his pack for being gay, alpha wolf Luke sees no way out of the solitary life he leads. That is, until he sees Finn, bent over the kitchen island, and the need to claim him, take him, becomes too much.
One thing Luke knows for sure--there is no going back, not after finding Finn.

Christian’s nice ways have finally landed him in the worst kind of trouble. After agreeing to help his friend, Finn, Christian becomes a target for a sadistic pack leader. He is saved from a beating by a sexy stranger.

Derrick has never been mistaken for a homeless person, but seeing how he met Christian after being passed out behind a dumpster, he can forgive the confusion. What he can’t forgive is how the sweet, sexy man attempts to ignore their connection.

When Christian agrees to return to his home, Derrick can breathe easily. Christian’s nice ways are his worst enemy, but Derrick has already decided Christian is his mate and will hold nothing back while claiming Christian.

Sorell may only be twenty-three but he knows how bad things can be and he’ll do anything to protect his new pack--his family. Even if that means ignoring his feelings for a sexy doctor and staying in a toxic relationship with a dangerous and violent man.

Felix wasn’t trying to find love, especially not with a younger man. He’s never been attracted to a man before Sorell and he’s still recovering from his last tour as a doctor in rough, foreign lands. His days are measured and controlled but he can’t stand by any longer and watch Sorell get hurt for the sake of others.

Sorell is set on sacrificing his own safety for the greater good. But Felix is growing stronger and he’ll face the world if that’s what it takes to save Sorell.

Conner is an alpha with a secret. He’s not running from his past though, he’s looking forward to his future with Pippen. From first sight, Conner was attracted to Pippen’s rough yet lithe exterior. As likely to stab you as anything, Pippen’s trust is not easily given and Conner will do everything he can to gain it. Because despite his past, he knows Pippen belongs in his future.


Pippen’s childhood taught him how to be hard, how to hurt before you got hurt. Except, Conner makes him feel like there could be a different life for him, one where he is protected and maybe even loved. But the past never stays in the past and Pippen’s has returned with one thing on his mind, dragging Pippen back to the life of violence he thought he left.

Now that Conner finally has Pippen in his arms and in his bed, he can’t imagine a life without him. No matter what, he’ll put it all on the line while protecting Pippen.
Theirs to Love
Francesca is great at finding mates--for other people. Her one big love ended in tears, shame and flames, literally. Now Frannie lives for her pack family and uses sarcasm to keep men at bay.

That doesn’t mean she can’t appreciate a sexy man when he comes her way. Mated alphas, Brock and Kai are positive that the curvy, feisty and clever Francesca is their mate but claiming her won’t be easy. Especially not with her army of older brothers standing in the way. But neither of them can ignore their inner beast, and their beasts demand Francesca. Nothing will prevent them from convincing Francesca she is theirs to love.
click to open popover

Kindle Customer
5,0 van 5 sterren Wow
22 augustus 2017 - Gepubliceerd op Amazon.com
Geverifieerde aankoop
A dream come true. Wait, no, a fantasy in written form. Only plural. I love happy endings. And I'm glad everyone had their HEA. Finn is my favorite. I love all the couples and I can't pick which pair I think is best. But the last is certainly not the least.
Meer lezen
Een iemand vond dit nuttig
Vertaal recensie in het Nederlands

Howard
5,0 van 5 sterren MUST HAVE
26 augustus 2017 - Gepubliceerd op Amazon.com
Geverifieerde aankoop
This collection is well worth the money. Do not hesitate. Do not pass go, lol. Pick this up today. Your tablets or whatever your reading on will feel like they are smoldering right into your pants.
Meer lezen
Een iemand vond dit nuttig
Vertaal recensie in het Nederlands

Adrienne Mills
5,0 van 5 sterren Mine to love
30 januari 2019 - Gepubliceerd op Amazon.com
Geverifieerde aankoop
These were awesome stories! I didn’t want to stop reading! Excitement, danger, heat and so much love. I didn’t want it to end.
Meer lezen
Vertaal recensie in het Nederlands

Kait
5,0 van 5 sterren Hot books that I can't wait to re-read!
17 augustus 2017 - Gepubliceerd op Amazon.com
Geverifieerde aankoop
I read these books using my Kindle unlimited and loved them. When I saw the box set on sale today for only $0.99 I couldn't pass it up! I would definitely read them again and owning the box set will make that super simple.
Meer lezen
Vertaal recensie in het Nederlands