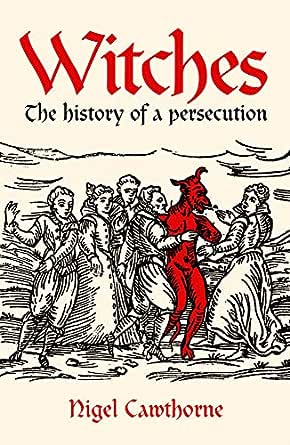 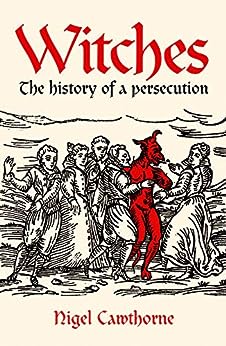 Witches: The history of a persecution (English Edition) Kindle-editie

When bigotry and power-mania take control, disaster always follows for subjugated persons - even when the power is wielded by the Church.

Witchcraft was viewed as devil-worship. Between 1450 and 1750, one hundred thousand people were accused, subject to the most bestial tortures and usually executed. Witches examines the wildfire-spread of witch hunting across Europe and America, as well as its roots in misogyny and religious persecution.

It includes:
• Letters and trial testimonies from those charged with witchcraft, as well as some from self-proclaimed witches
• Biographic detail of key witch hunters, such as Matthew Hopkins (the so-called Witchfinder General) who was responsible for hundreds of executions
• Accounts of famous witch trials, from Chelmsford to Salam

Nefabit Miew
5,0 van 5 sterren A great resource
15 mei 2007 - Gepubliceerd op Amazon.com
This book is a comprehensive overview of the persecution of witches. I'm not an expert, but to my knowledge, everything is historically accurate. Everything is explained well, and theories are gone into without the author pressing his opinion. In fact, he presents his information in the most non-opinionated way that I've seen in any book. The author obviously has talent in writing. This book goes into detail without being boring, and spans great amounts of history without being too long or seeming to skip around. I was particularly impressed by the historical images found throughout the book and the individual cases of persecution. Though the subject is grim, I greatly enjoyed this book and it is an essential resource on my shelf.
Meer lezen
8 mensen vonden dit nuttig
Vertaal recensie in het Nederlands

Kosher Bacon
1,0 van 5 sterren Unbalanced and PC
14 juli 2009 - Gepubliceerd op Amazon.com
In his bibliography, the author lists a book by Montague Summers, as well as a book called "The Subversion of Women: As Practiced by Churches, Witch-Hunters, and Other Sexists." Clearly the feminist revisionism of the latter work had more of an effect on the author than did Montague Summers. In this politically correct age, I guess the agenda of feminist harpies is less suspect than that of a traditional Catholic.

If you're looking for a work which systematically portrays the Church as ruthless, calculating, greedy, and tyrannical, while potraying those accused of witchcraft as poor, innocent, and harmless, then you've come to the right place.

Although I am not a Christian and am not particularly religious, I understand the religion that is political correctness well enough and have gotten leery of authors who try to paint Western, Christian civilization in the blackest blacks while simultaneously whitewashing paganism, witchcraft, and all these other supposedly benign, peace-loving, tree-hugging, proto-feminist cults. After seeing the pattern repeated hundreds of times, it's obvious that the principal motivation behind such attacks on Western Civilization is a hatred of heterosexual white males (for example, you rarely see feminists writing bitter denunciations about witch burnings in Africa, even though such burnings are still common today; this is because feminists are reluctant to attack or criticize blacks, since blacks are a part of their coalition against heterosexual white males).

I don't doubt that many innocents were executed for witchcraft, that interrogation techniques were often harsh, that trials often weren't fair, and that there was abuse and corruption (as there is, always has been, and always will be within any power structure), but I am also equally convinced, based on my research, that not all of those convicted were innocent and that witches did indeed exist. By "witches," I don't just mean harmless peasants who practiced folk medicine; I'm referring to individuals and underground organizations which actually did worship demonic entities, practiced black magic, were involved in political intrigue, were profoundly hostile towards Christianity and the Church, carried out various other criminal acts such as poisonings, human sacrifice, and grave desecrations, etc. Whether or not you believe in the supernatural aspects, the fact remains that these people DID believe in them, acted on their beliefs, and were therefore guilty as charged. This is the information that is always conveniently left out by the feminists and their ilk, who wish to demonize heterosexual white males while canonizing women and certain priviliged minorities.

I mean, surely no one denies that Countess Elizabeth Bathory did indeed exist and that she did indeed bathe in the blood of around 600 murdered girls under the quasi-magical supposition that it would improve her complexion and slow her aging, do they? If everyone can agree that there were women like Countess Bathory around at the time of the witch hunts, why is it so hard for some to accept that there were witches? Curiously, her case isn't mentioned in the book. Maybe the author is excluding evidence that doesn't fit his belief that witches were a bogeyman invented by the Church?

In one part of the book, the author suggests that Gilles de Rais, who was executed for the sexual abuse and ritual murder of over 800 boys, was innocent and had merely been framed by his political opponents. Well, ignoring the fact that the author doesn't present a shred of evidence to support his dismissal of the charges, what if he's plain WRONG? What kind of a sick puppy would defend a pervert who had murdered and sexually abused hundreds of boys? 200 years from now, will politically correct "progressives" be writing similar books claiming that John Wayne Gacy and Jeffrey Dahmer weren't real, or that they were falsely convicted by our "homophobic," "heterosexist" justice system? That's a scary thought.

Interestingly, while the author is quick to attribute ulterior, political motives to those who accused Gilles de Rais, he completely omits that the North Berwick witches had ties to the Earl of Bothwell, who was suspected of plotting to kill James VI of Scotland to inherit the throne, and who developed a reputation for being a dabbler in black magic. Apparently the author likes to invoke ulterior motives when he thinks they support his position that witches didn't exist, but ignores such motives when they don't suit his agenda.

The author writes about the "persecution" of the Templars, but predictably, glosses over the fact that one of the reasons the Templars were so hated was because they, like the jews, practiced usury (the lending of money at extremely high rates of interest).

I could cite other examples of the author's selective use of facts, but you get the picture. There's two sides to every story, and you're not going to get the other side from this book. For that, I would suggest anything written by Montague Summers, and Colin Wilson's "Beyond the Occult."

Ironically, even though the stories in this book are intended to persuade the reader that all witchcraft allegations were false, some had the opposite effect on me. For example, the story of Dame Alice Kyteler -- she was married FOUR times, and three of those husbands died, leaving her with inheritances that made her the wealthiest woman in Kilkenny? Sounds fishy to me. And far from being the brave but helpless victim of a misogynistic, male-dominated system (or so the feminists tell us), Alice Kyteler had some powerful connections which made it all but impossible to prosecute her.

I'm also left wondering if, the usury issue aside, the Templars might not have been a bizarre, perverse, heretical cult, just as they were accused of. Otherwise, why all the secrecy surrounding their rituals and so on?