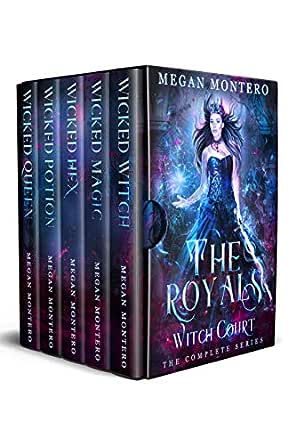 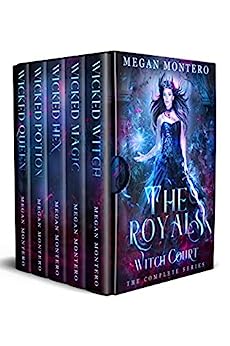 This box set includes all five books in The Witch Court Series and is over 1,000 pages of magic, epic romance, adventure, and twists you'll never see coming!

It’s time to claim my power…

All my life I’ve lived under lock and key, always following the strict rules my mother set for me. A week before my sixteenth birthday I sneak out of my house and discover why. Turns out I am not just a normal teenager. I’m a witch blessed with a gift someone wants to steal from me.

For a thousand years the people of Evermore have suffered under his tyranny. The Mark on my shoulder says I am the Siphon Witch, one of five Witch Queens fated to come together and finally destroy him. The only thing keeping Evermore safe is the Stone that shields the witch kingdoms from Alataris’s magic…and now he’s found a way to steal it. Suddenly, I’m sent on a quest to find the ancient spell to protect the Stone. My only hope for surviving is through my strikingly beautiful and immensely powerful Guardian, Tucker. The laws of Evermore state that love between us is strictly forbidden, and it appears I’m the only one willing to give in to the attraction…

When the quest turns more dangerous than expected I realize I have absolutely no idea what I’m doing. I was raised human. But I have to learn my magic fast because If King Alataris gets his hands on me he’ll steal my magic and my life…but if he gets his hands on that Stone we all die.

Over four MILLION pages read. 500+ five-star review for the series. Now for a limited time, save over 50% compared to buying the individual books by reading the entire Witch Court series in this special bundle deal!

“Fantastic Series! This was a great young adult series! The world building is great, and the characters and story line keep you interested from the start. Plenty of action and adventure and a forbidden romance. I highly recommend this series!”
Cindy, Amazon Reviewer ★★★★★

So where do I even begin I am hooked, I want and need more. This book is captivating I didn't want to put it down like ever and I definitely didn't want it to end. I loved every aspect of it and I highly recommend this as I'm sure everyone will love it as much as I did. The storyline is on point and it has what every romance in my opinion should have a delicious bad boy who is forbidden WHAT!!! Add this with zinnia being your average girl only to find out she isn't so average after all. Wow just wow!
Dixie, Amazon Reviewer★★★★★

Holy Moly, I was not expecting to fall in love with this series. Is there any way to give this novel more than 5-stars. I cannot wait to read more from these characters and this world. Highly addicted already eep! This novel is a must read, I cannot recommend this novel enough.
Nicole, Goodreads reviewer ★★★★★

As a huge fan of the classic stereo typical witch Book series, I felt the originality of the author’s opinions, statements, characters and overall scene Descriptions. It really transported me to where ever these characters went! If you are a big fan of Harry Potter, the sweep series, the secret circle series or any other magical witchy romantic series, this is the book for you.
Judith, Goodreads reviewer★★★★★

Boy, oh boy!!! Action packed, full of twists and turns, with great world building!!!! Not to mention the sizzling and yet forbidden attraction between Zinnia and Tucker!!! I'm so hooked!
Reena, Amazon reviewer★★★★★

The Royals: Witch Court bundle set includes all five books in the series packed with wicked magic, adventure, and a forbidden love you’ll be rooting for until the end. Titles include:

What are you waiting for? Scroll up and click buy now to find out why readers all over the world are addicted to The Royals!!

Carole
5,0 van 5 sterren Awesome series! Can't wait for the next one to start!
4 september 2019 - Gepubliceerd op Amazon.com
Geverifieerde aankoop
Loved the fallen angel angle. Got a kick out of how the fountain kept getting broken. Last book made me cry hard and for me, that means a lot! Author just draws you into the story and keeps you hooked. I'm lucky I didn't find this until this part of the series was complete or I would have been chomping at the bit for the next one! As it is, I can hardly wait for the next series to start!
Meer lezen
Een iemand vond dit nuttig
Vertaal recensie in het Nederlands

Look for the spin-offs Wicked Omen (The Royals: Warlock Court) and the Vampire Court to come.

Scarolet Ellis
5,0 van 5 sterren Amazing box set
22 december 2019 - Gepubliceerd op Amazon.com
Geverifieerde aankoop
Witch Court: The complete series (The Royals) by Megan Montero is an amazing box set that I have loved reading and can not wait to read more from this author. I highly recommend this story to everyone who loves reading about magic.
Meer lezen
Vertaal recensie in het Nederlands

cindy cafmeyer
5,0 van 5 sterren Fantastic series!
7 augustus 2019 - Gepubliceerd op Amazon.com
Geverifieerde aankoop
This was a great young adult series! The world building is great, and the characters and story line keep you interested from the start. Plenty of action and adventure and a forbidden romance. I highly recommend this series!
Meer lezen
Vertaal recensie in het Nederlands