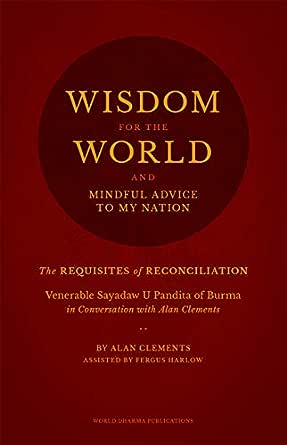 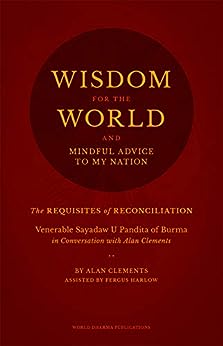 Wisdom for the World: The Requisites of Reconciliation: Alan Clements in Conversation with Sayadaw U Pandita of Burma (English Edition) Kindle-editie

The Venerable Sayadaw U Pandita of Burma (also known as Myanmar), was one of the foremost authorities on vipassana (insight) meditation and a pioneer of the Western mindfulness movement. With thousands of students in centers worldwide, Burma's most senior Buddhist monk also trained hundreds of leading meditation teachers in both the East and West. Yet, despite all of this, and numerous influential books compiled from his public talks, he rarely gave interviews. In Wisdom for the World: The Requisites of Reconciliation, he breaks his silence to reveal some of his most compelling insights, delivered as his final teaching for the people of the world and his native country, Burma.

Over 9 consecutive nights before he passed away in April 2016 at the age of 95, the Venerable Sayadaw weighed in on some of the most critical issues facing Burma and the world today through exceptionally rare and remarkable conversations with his first Western student, journalist, and friend of nearly 40 years, Alan Clements.

Covering topics from religious extremism to systemic oppression, and the requisites for surmounting them, the Venerable Sayadaw deftly elaborated on the Mahasi Sayadaw system of mindfulness meditation and its application in our troubled world. “More important than victory of others is to be victorious over oneself”, he says, illuminating the difference between right and wrong mindfulness and calling for a worldwide revolution in Spiritual Intelligence, or “SQ” (a key component of his teachings over the past 15 years).

As the principle spiritual adviser to many of the leading figures in Burma’s decades long non-violent democratic revolution, Wisdom for the World speaks a final time to those leaders and fosters hope for a country still convulsing from decades of dictatorship. Here, this beloved teacher elucidates the role of reconciliation in calming the turmoil of conflict faced by so many in the world today.

With forbearance, wisdom and compassion, the Venerable Sayadaw outlines the theory and practice of gaining mindful control of one's own mind so that we may all move towards a more peaceful society. Essentially, Wisdom for the World provides the timeless psychological and spiritual guidance - the mindful intelligence - for anyone desiring to surmount intolerance, hatred and discrimination, in whatever form they take.

Clements was among the first Westerners to ordain as a Buddhist monk in Burma, where he lived in a monastery practicing mindfulness meditation for nearly five years, before being expelled from the country in 1984 by the dictatorship, with no reason given. Leaving the monastic life, Clements returned to the West, becoming a spiritual maverick, journalist, and human rights activist engaged in Burma's nonviolent struggle for freedom while speaking up for political prisoners worldwide.

Clements co-authored The Voice of Hope with Burma's Aung San Suu Kyi - the former political prisoner and Nobel Peace Laureate. In addition, his books include, Burma: The Next Killing Fields, and Revolution of the Spirit, both with forewords by the Dalai Lama and endorsed by 8 Noble Peace Laureates and former President Jimmy Carter. He's also written Instinct for Freedom and A Future To Believe In: 108 Reflections on the Art and Activism of Freedom.

Clements has been interviewed on ABC National, Talk to America, CBC, VOA, BBC, the New York Times, Time and Newsweek magazines, the Sydney Morning Herald, Utne Reader, Yoga Journal, and scores of other media worldwide. He also delivered a keynote at Amnesty International's 30th Year Anniversary at the John Ford Theater in LA. You can learn more about Alan's work on his website: www.AlanClements.com.

Moe Ross
5,0 van 5 sterren A MUST read if you care about life, the world, peace. Thank you Alan Clements.
8 maart 2019 - Gepubliceerd op Amazon.com
Geverifieerde aankoop
I could not put this book down and imagine that I will read it again and again. it is one of the rare books that if it were an arrow, it went straight into my heart. Brilliant.
Meer lezen
Vertaal recensie in het Nederlands
Ga naar Amazon.com om alle 1 recensies te bekijken 5,0 van 5 sterren
Terug naar boven
Over ons
Verkoop bij ons
We helpen je graag
© 1996-2020, Amazon.com, Inc. en dochterondernemingen