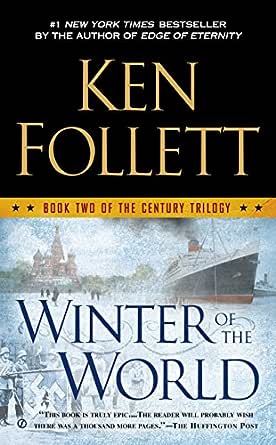 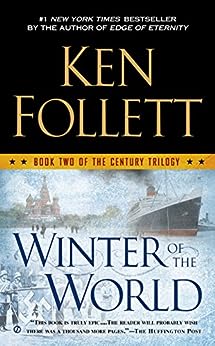 Winter of the World (The Century Trilogy, Book 2) Kindle-editie

Praise for Winter of the World "Gripping . . . powerful." --The New York Times "Some of the biggest-picture fiction being written today." --The Seattle Times "A consistently compelling portrait of a world in crisis." --The Washington Post "Masterfully sweeping. . . . Political intrigue, amorous episodes, suspense, and drama. History comes to life." --The Louisville Courier-Journal "[Follett] is so good at plotting a story, even one that takes on such a complex topic such as the World War II era. That's what makes Winter of the World so hard to put down. You want to know what happens next." --The Associated Press "An entertaining historical soap opera." --Kirkus Reviews "The man tells a story so well. . . . Follett can make things glow with some beautifully written episodes." --St. Louis Post-Dispatch "Clips along at a brisk pace. . . [Follett] knows how to keep the pages turning and how to make the reader feel a kinship with the characters' struggles. . . . No matter the ultimate destination, readers can expect to savor the journey." --The Christian Science Monitor

"This book is truly epic. . . . The reader will probably wish there was a thousand more pages." —The Huffington Post

Picking up where Fall of Giants, the first novel in the extraordinary Century Trilogy, left off, Winter of the World follows its five interrelated families—American, German, Russian, English, and Welsh—through a time of enormous social, political, and economic turmoil, beginning with the rise of the Third Reich, through the great dramas of World War II, and into the beginning of the long Cold War.

Carla von Ulrich, born of German and English parents, finds her life engulfed by the Nazi tide until daring to commit a deed of great courage and heartbreak . . . . American brothers Woody and Chuck Dewar, each with a secret, take separate paths to momentous events, one in Washington, the other in the bloody jungles of the Pacific . . . . English student Lloyd Williams discovers in the crucible of the Spanish Civil War that he must fight Communism just as hard as Fascism . . . . Daisy Peshkov, a driven social climber, cares only for popularity and the fast set until war transforms her life, while her cousin Volodya carves out a position in Soviet intelligence that will affect not only this war but also the war to come.

Sarah
5,0 van 5 sterren This is a good book for its own sake
7 juni 2016 - Gepubliceerd op Amazon.com
Geverifieerde aankoop
This is a good book for its own sake, but the main thing is that it's an enjoyable way to learn about history in excellent detail through fiction. If you are writing a doctoral thesis on world war 2 politics and history, it's probably not detailed and accurate enough, but if you're just a normal person who hasn't read anything like this since high school or a first year college survey of American history class. Almost no other writer takes you through a story with as much historical detail as Follett, so that you feel like you have been taught a proper lesson along with it. Personally I really enjoy this type of thing and it's my idea of a good time, so this is exactly the type of book I take to the beach. I am a very weird person though, and not a lot of fun at parties. If you are a normal person who has normal person interests, this isn't necessarily the lightest and easiest read. It's long, it's full of facts and details, but those are also its main selling points. If you want something to read in a day with the TV on in the background, or is a quick fix, this is a bad choice. It does have deep interesting characters who develop not only through the first book that preceded this one, but through this book and the third book in the series, action and tragedy, and a wealth of historical information that has a great deal of value beyond the enjoyment of the fictional aspects of the story. I highly recommend this whole series to anyone who enjoys historical fiction.
Meer lezen
62 mensen vonden dit nuttig
Vertaal recensie in het Nederlands

I can't wait till I get the next in the series. My sister was right, these are terrific books!

After reading several books on Nazism, I see the juxtaposition of then and now. I also see the irony of what is happening in the USA - false hysteria, bullying of the press, xenophobia, sexism and hurt and pain to the weak and less fortunate. While Follett writes historical fiction, he is spot-on with his work as he paints the Nazi picture of hate and oppression. Thank you for writing this book and reminding us of how valuable our precious democracy is to us all. This story, his story, is exactly what is needed so that we never ever accept tyrants and dictators and repeat ourselves.
Meer lezen
15 mensen vonden dit nuttig
Vertaal recensie in het Nederlands

Myra Bosch
5,0 van 5 sterren History and fiction blend comfortably
19 oktober 2016 - Gepubliceerd op Amazon.com
Indeling: Kindle-editieGeverifieerde aankoop
I couldn't put the book down. Several fictional plots are drawn amidst a well defined historical background - fictional characters sometimes meeting, or even working with well-known historical figures, thus highlighting some lesser-known characteristics of and facts about them. As this is the second book of Ken Follett's trilogy, many of the characters were either introduced in his first book, Fall of the Giants, or are the offspring of those characters.The story takes place before, during and after World War II and the main characters play out in Germany, Britain, the USA and the Soviet Union. Circumstances, historic, or otherwise, force these characters to gravitate towards each other and the reader senses that they are connected somehow and will inevitably meet.
The novel covers a wide range of world events; the rise of Nazism, the ascent of Franco in Spain, the Battle of Moscow, the Blitz, the Normandy landings, the attack on Pearl Harbor, the development of the atom bomb, the fall of Berlin and many more. This was a fun way of brushing up on my history.
Meer lezen
19 mensen vonden dit nuttig
Vertaal recensie in het Nederlands

Pushing 70
5,0 van 5 sterren The 957 pages of this book tell a gripping historical tale
23 augustus 2017 - Gepubliceerd op Amazon.com
Geverifieerde aankoop
There's nothing pretty about this plot. World War II breaks out and deprivation, hardship and heartbreak affect each family. What makes this novel so compelling is the incredible attention to detail. The bombing of Pearl Harbor reads like a news account and the horror of the German/Russian battles are difficult to read. Nonetheless I couldn't put this book down; I read it in less time than many books half its length. Surprisingly, even though it's book two of a trilogy, it is very much a stand alone story. I read the first book "Fall of Giants" several years ago and remember little about that book other than I liked it. This book is special and I'm considering tackling the last in the series shortly.
Meer lezen
8 mensen vonden dit nuttig
Vertaal recensie in het Nederlands
Ga naar Amazon.com om alle 7.333 recensies te bekijken 4,5 van 5 sterren
Terug naar boven
Over ons
Verkoop bij ons
We helpen je graag
© 1996-2020, Amazon.com, Inc. en dochterondernemingen