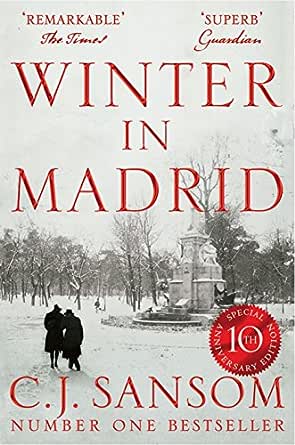 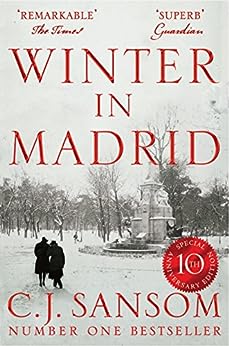 "It comes as no surprise to learn that Sansom's novel spent month after month on London's bestseller lists."
-The Philadelphia Inquirer "There are touches of Graham Greene; Hemingway's here, too. . . . But Sansom transfigures his sources into a moral universe very much his own."
-The Independent (U.K.) "Sansom [proves] real noir is best when lit with flashes of wit."
-Publishers Weekly "Sansom can lay claim to a place among the best distinguished of modern historical novelists."
-P. D. James

A special 10th anniversary edition of the standalone bestseller, Winter in Madrid, by the author of the much-loved Shardlake series, C. J. Sansom.

1940: The Spanish Civil War is over, and Madrid lies ruined, its people starving, while the Germans continue their relentless march through Europe. Britain now stands alone while General Franco considers whether to abandon neutrality and enter the war.

Into this uncertain world comes Harry Brett: a traumatized veteran of Dunkirk turned reluctant spy for the British Secret Service. Sent to gain the confidence of old school friend Sandy Forsyth, now a shady Madrid businessman, Harry finds himself involved in a dangerous game – and surrounded by memories.

Meanwhile Sandy's girlfriend, ex-Red Cross nurse Barbara Clare, is engaged in a secret mission of her own – to find her former lover Bernie Piper, a passionate Communist in the International Brigades, who vanished on the bloody battlefields of the Jarama.

In a vivid and haunting depiction of wartime Spain, Winter in Madrid by C. J. Sansom is an intimate and compelling tale which offers a remarkable sense of history unfolding, and the profound impact of impossible choices.

Nigel Cronshaw
5,0 van 5 sterren I knew next to nothing about the Spanish Civil War until...
17 maart 2019 - Gepubliceerd op Amazon.com
Geverifieerde aankoop
My sister gave me the paperback copy of this and some others. Eventually I started in what was to be a gripping tale of some friends, one of which heads off to Spain, stays, but gets caught up in the prequel to WW2. Another friend, while working for the British government is sent to Spain on other business, but tries to retrace the steps of his missing friend.
WW2 is fully underway, but is Spain at peace with itself? What became of the friend last heard of in Spain?
I'm going to leave that there. My story is that I was so caught up with the story I was reading it at every opportunity I could. I was fair blazing my way through it.
Then I left it behind at a chemical plant in Germany....
An hour later, realising what I had done I considered turning around but I had gone too far already and had to get that load to the docks at Rotterdam. Grrrrr… My Kindle at the time could download anywhere. I looked up the title, pressed the tab, and before I crossed into Holland I had the Kindle book. Yes!
I may have finished the book that night, glad that I had downloaded this copy.
There still isn't so much written about the Spanish Civil War, as messy and bloody as it was. I have read the Victoria Hislop book that tells a tale of these years. I devoured that one also, another Kindle buy.

L. Atha
5,0 van 5 sterren Great Book for Hemingway Fans about post-Spanish-civil-war Spain
25 januari 2020 - Gepubliceerd op Amazon.com
Geverifieerde aankoop
I liked this book. It was a fascinating look into post civil-war Spain. The historical details of The Francoist dictatorship were revealing to me, I didn’t really understand the falangist political movement and the parallels to fascism until i read and heard this book. It’s a very compelling story, with a young British veteran from Dunkirk sent to Spain by the British to appreciate the situation and collect intelligence thru contacting one of his public school (public school in the United Kingdom is like boarding/prep school here) classmates who is a businessman working closely (and running a con) with the Falangists. The nature of the Spanish tragedy and the relationship of Franco’s party and government with the Catholic Church and their extreme methods of social and economic control of the poor in Spain is very revealing. While it’s fiction, it’s very well researched and the text illustrates these beautiful people, their fantastic land and the cruel nature of war and life in Spain in the nineteen 30s and 40s.
Just a great book - I totally recommend to the Hemingway aficionados of Spain. Great scenery, compelling story, good suspense. Just terrific!
Meer lezen
Een iemand vond dit nuttig
Vertaal recensie in het Nederlands

Sascot
4,0 van 5 sterren Historical fiction at it's best
12 april 2019 - Gepubliceerd op Amazon.com
Geverifieerde aankoop
Vivid descriptions of the Spanish Civil War and a story that kept me gripped throughout. The characters are well drawn, the action, though sometimes grizzly, written as befits the horrors of what happened. There was just one aspect of this book, which grated, the repetition of the scenes; in cafés, the state of the weather, walking the streets of Madrid. I felt too the action could have been a bit tighter, with less concentration on the politics of the time. Loved the book, though.
Meer lezen
Een iemand vond dit nuttig
Vertaal recensie in het Nederlands

Kindle Customer
5,0 van 5 sterren Winter in Madrid
11 augustus 2015 - Gepubliceerd op Amazon.com
Geverifieerde aankoop
I don't normally read books set during WWII, but made an exception since I have read and liked this author's Matthew Shardlake series. Winter in Madrid is a fast paced spy novel that sends a reluctant British war veteran who suffers from bouts of post traumatic stress to war-torn Spain to spy on an old private school friend who was always getting into trouble as a boy. The author paints a haunting portrait of war-torn Spain; and how people were so divided by class, politics, and religion. I highly recommend this book.
Meer lezen
7 mensen vonden dit nuttig
Vertaal recensie in het Nederlands
Ga naar Amazon.com om alle 181 recensies te bekijken 4,0 van 5 sterren
Terug naar boven
Over ons
Verkoop bij ons
We helpen je graag
© 1996-2020, Amazon.com, Inc. en dochterondernemingen