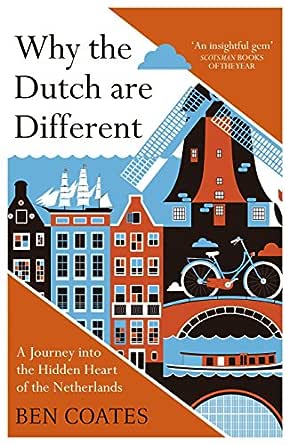 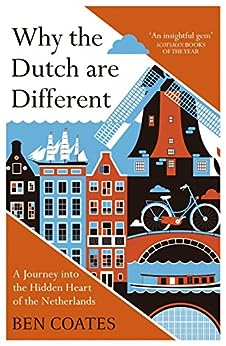 Why the Dutch are Different: A Journey into the Hidden Heart of the Netherlands: From Amsterdam to Zwarte Piet, the acclaimed guide to travel in Holland (English Edition) Kindle-editie

One of the few books on our near-neighbour, Coates gets under the skin of a nation renowned for its liberalism.--The Bookseller

In Why the Dutch are Different, a torch beam of scrutiny plays across the country's past and its lesser known foibles. Author Ben Coates has produced an insightful gem.--Scotsman - Books of the Year

I thoroughly recommend this book. Why the Dutch are Different provides the answers to all the questions I had but didn't dare ask about the Netherlands. I eagerly sat up late into the night reading, laughing often and enjoying the ride into my adopted homeland.--DutchNews

A striking portrait of the Netherlands in the 21st century, offering a refreshing and long overdue update of the way the Dutch national character is described.--Edinburgh Book Review

A book as quietly appealing as its subject and full of fascinating details. Coates is entirely convincing in his affectionate portrait.--Prospect

Fascinating. Thoroughly researched and well thought out, Why the Dutch are Different takes us on a journey that goes beyond red-lit windows and Anne Frank to the true depths of the country. Ben Coates's day-to-day life sits effortlessly alongside deeper dives into history and folklore. A friendly read that strikes the right balance between teaching and entertaining.--The Bookbag

Vivid and informative. Coates intertwines the nationâ s journey to its modern iteration with his own adaptation to the Dutch lifestyle. An accomplished debut.--Geographical

*A SCOTSMAN TRAVEL BOOK OF THE YEAR*

Stranded at Schiphol airport, Ben Coates called up a friendly Dutch girl he'd met some months earlier. He stayed for dinner. Actually, he stayed for good.

In the first book to consider the hidden heart and history of the Netherlands from a modern perspective, the author explores the length and breadth of his adopted homeland and discovers why one of the world's smallest countries is also so significant and so fascinating. It is a self-made country, the Dutch national character shaped by the ongoing battle to keep the water out from the love of dairy and beer to the attitude to nature and the famous tolerance.

Ben Coates investigates what makes the Dutch the Dutch, why the Netherlands is much more than Holland and why the colour orange is so important. Along the way he reveals why they are the world's tallest people and have the best carnival outside Brazil. He learns why Amsterdam's brothels are going out of business, who really killed Anne Frank, and how the Dutch manage to be richer than almost everyone else despite working far less. He also discovers a country which is changing fast, with the Dutch now questioning many of the liberal policies which made their nation famous.

A personal portrait of a fascinating people, a sideways history and an entertaining travelogue, Why the Dutch are Different is the story of an Englishman who went Dutch. And loved it.

Valmarp
4,0 van 5 sterren A memoir and guide book in one
20 november 2017 - Gepubliceerd op Amazon.com
Indeling: Kindle-editieGeverifieerde aankoop
4.5 stars. I started reading Why the Dutch are Different a while ago and have just finished it now. At first I wasn't sure whether it was memoir, history, social comment or what it was, but actually it's a mixture of all three.

Ben Coates is a young Englishman who was formerly in the hectic political world of the UK. As a speech writer and lobbyist, I am sure he must have been used to viewing the world through a critical lens. This book is a reflection of his ability to stand back and look at the Netherlands without any rose-tinted glasses on, something I think I would find hard to do myself as I tend to want to focus on the positive aspects of life wherever I have lived it, and of course I've lived in the Netherlands for nearly seventeen years.

First and foremost, let me say Ben Coates is an exceptionally good writer. His flexible use of English in his keen perceptions on the Dutch, their history and their customs is perfect and I often stopped reading simply to admire a sentence or phrase that seemed particularly apt or succinct. There were, however, quite large sections of the book I felt tempted to skim over. For those who don't know much European, and specifically Dutch, history, this book gives a kind of potted summary of many of the important periods in the country's past. For these people, it will probably be useful; for myself, I could have done without quite so much straying into the activities of the VOC (the East India Company), King William's exploits into England and the history of the Spanish and French domination of the Netherlands. This was all background I studied at school and university and unfortunately, it didn't really strike me as anything more than just reeling off the facts; nor did it seem to have much to do with why the Dutch are different now, other than setting the historical background for the country's great reputation as a trading nation that supported the arts in its Golden Age. On the plus side, I learnt a lot of fascinating little gems, such as why the city of Breda got its name (the breede Ee, meaning the wide river Ee) and other such titbits. I found myself frequently asking my Dutch partner 'Did you know this?' and often he didn't, so for all those interesting snippets, I was very grateful.

Strangely enough, I enjoyed the section on the Dutch obsession with football. I'm not a football fan at all, but the fanatical devotion the Dutch have to soccer is a curious phenomenon in this country and I found the accounts he gave of the teams, the key players and managers and both the national adoration and criticism that the Dutch have for their footballers really entertaining.

However, most of all, I enjoyed the later chapters where he writes about how the intrinsic Dutch culture of 'anything goes' has been tested in recent years by what opening borders and increased immigration have meant to the Netherlands. He writes lucidly and honestly about how this has affected the traditionally relaxed attitude Dutch have had to drug use, prostitution, homosexuality, euthanasia and immigration.

All this quite intense discussion is set against the background of Ben Coates' own experience as he travelled around the Netherlands during his early years in the country and while he makes few personal judgements until quite close to the end of the book, he tells things like they are. I must say I quite often wondered if he even liked it at all; that was until I reached the final chapter, when I realised that he, like me, appreciates how much our easy, breezy self-confident and optimistic Dutch hosts have to offer. He also shows how fond we can become of these smiling, but direct people who fully espouse their 'philosophy of a flat country'.

As I said at the beginning, this book is part memoir, part history lesson and part editorial. Overall, it is a really good read and I learnt a lot from it and I am now looking forward to reading his new book about the Rhine, which is apparently due out soon.
Meer lezen
22 mensen vonden dit nuttig
Vertaal recensie in het Nederlands

A Martinez
5,0 van 5 sterren Enjoyable read and conversation catalyst with Dutch friends
22 januari 2018 - Gepubliceerd op Amazon.com
Geverifieerde aankoop
After working with Dutch customers and colleagues, I’ve been intrigued for quite some time about life in the Netherlands, potentially as new host country for my German wife and me (non-EU citizen). I got this book after having read “In the City of Bikes: the Story of the Amsterdam Cyvlist” by Pete Jordan (also recommended if interested in learning about the Dutch’s love for their bikes as a mode of transportation).

Ben Coates did a very good job in his book to give us the highlights of the Netherlands from an expat perspective. I enjoyed learning about the Golden Age of the Dutch empire, the impact of the German invasion & the second WW (particularly important for my wife!), multiculturalism, and the current social challenges (not seen from the scope of the atrocious News and Media in the US).

I’ve had fun already sharing/confirming Ben’s learnings with my Dutch friends (particularly their views about the Belgians).

I look forward to read the Rhine as soon as it is available in Amazon.
Meer lezen
8 mensen vonden dit nuttig
Vertaal recensie in het Nederlands

Wyoming Miss
5,0 van 5 sterren Descriptions on steroids!
9 april 2017 - Gepubliceerd op Amazon.com
Geverifieerde aankoop
Ben Coates uses the English language in an astonishing way. When I read his book, it was if I had seen English used the most beautiful way possible. Every sentence tells a complete description of what he sees, hears and even smells on his journey. It is a thought provoking book with excellent history of the peoples called "Dutch". I belong to a beginning writers' group and bought two copies to share so they could see how an amazing man uses the English language.
Meer lezen
10 mensen vonden dit nuttig
Vertaal recensie in het Nederlands

Liorah
4,0 van 5 sterren Quite interesting
9 januari 2016 - Gepubliceerd op Amazon.com
Indeling: Kindle-editieGeverifieerde aankoop
For this former Dutch national there were lots of changes. Especially in how the Dutch society has become more weary about the goings on. To me the fuss about Zwarte Piet, a traditional and fantasy character is amazing. I never saw him as a lowly slave but an assistant who happened to be a Moor.
The drug scene seems to be out of control, which I have noted on my yearly trips back to the country.
Also tolerance of different nationalities and religions is no longer.
I belief this book is accurate enough to get a real feel of what the country is today.
Meer lezen
13 mensen vonden dit nuttig
Vertaal recensie in het Nederlands

Robert Zoba
5,0 van 5 sterren What a Great Find!
26 augustus 2017 - Gepubliceerd op Amazon.com
Indeling: Kindle-editieGeverifieerde aankoop
In planning a trip to Holland, I wanted to read something that would offer "slice of life" insights rather than the "just the facts ma'am" info of typical travel books or general histories. I couldn't have found a better book. The author alternates between historical information and daily-living anecdotes. As an ex-pat he has enough critical distance to provide insight for the outsider, but enough of an obvious love for the Dutch to make his description winsome. As a person whose mind has been jumbled by Google and all its distractions, I nonetheless finished this book in several days. A new record for me, but even more so a tribute to the author's ability to be informative and funny at the same time. Cheers mate!
Meer lezen
7 mensen vonden dit nuttig
Vertaal recensie in het Nederlands
Ga naar Amazon.com om alle 79 recensies te bekijken 4,1 van 5 sterren
Terug naar boven
Over ons
Verkoop bij ons
We helpen je graag
© 1996-2020, Amazon.com, Inc. en dochterondernemingen