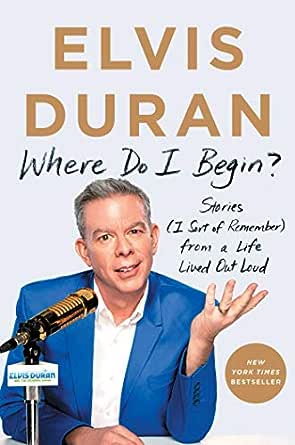 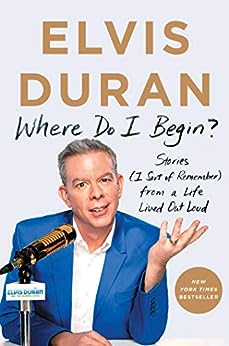 Where Do I Begin?: Stories from a Life Lived Out Loud (English Edition) Kindle-editie

"Growing up in Atlanta, I listened to Z93 and would call into Elvis's show to request songs. What sets radio apart from any other medium in the world is that it provides its hosts and listeners with a special bond. We become a part of one another's lives. This book is the rest of the radio story told by a man who has been as big a part of the industry's success as anyone."--Ryan Seacrest

"Nobody keeps it as real as Elvis does, and that's the reason we all love him because his authenticity is magnetic. First time I ever got drunk with him he shared this jewel: 'Charla-magne, you know what they say, you didn't have a good night if you woke up and there was no blood on your pillow.' I have zero idea what that meant but it's inspiring and I won't stop until I have one of those nights."--Charlamagne Tha God, co-host of The Breakfast Club

"Elvis has a liver more powerful than a sewage treatment facility and a heart that pours joy into everybody blessed to meet him. But his real gift, reflected in this book, is asking the extra question that takes us deeper into the stories that matter to all of us while making us laugh the entire time."--Mehmet Oz, MD, host of The Dr. Oz Show

"Elvis is bighearted, deliciously warm, and truly thankful for his fortunes and adoring friends. He brings out the best in people, making each feel like a million bucks. I hope this is the first of many books; I'm already waiting in line."--Barbara Corcoran, co-star of ABC's Shark Tank

"From his humble beginnings to radio star-dom, Elvis has always been an unsung hero who tirelessly gives to those in need. I'm grateful to be the lucky recipient of his wicked wit, and now readers can be too. Tequila shots not included."--Bobbi Brown, beauty and lifestyle mogul

"It is impossible not to fall in love with Elvis. No, not THAT Elvis--MY Elvis. I know I have to share him with the world but I don't like it! He's one of my favorite people and I'm so grateful to call him my friend."--Kathie Lee Gifford

In this New York Times bestseller, host of one of the nation’s top morning shows Elvis Duran shares his wildest stories and hardest-learned lessons with his trademark honesty and “bighearted, deliciously warm” (Barbara Corcoran, star of ABC’s Shark Tank) humor.

Elvis Duran’s nationally syndicated radio program, Elvis Duran and the Morning Show, is America’s most-listened-to Top 40 morning show and one of the 10 most-listened-to programs in all of radio, heard live by nearly ten million people every morning.

But his success didn’t happen overnight. Elvis spent years navigating the wild world of radio as a DJ for hire, working (and partying) in markets around the country before taking over the morning shift at the legendary Z100 in 1996. Over the last twenty years, he has become one of New York City’s signature voices (Variety calls him “a permanent fixture of the area’s daily commutes”) thanks to his show’s exciting mix of music, new artist discovery, interviews, gossip, and live listener interaction.

Along the way, Elvis has become known not just for his incisive interviews (and occasional feuds) with pop music’s biggest stars, but for the show’s commitment to kindness and positivity and Elvis’s own candor and openness with his audience.

Bold, funny, and totally candid, Where Do I Begin? is sure to be loved by anyone who listens to Elvis live every morning—or anyone who wants to know what really goes on behind the scenes of the pop music machine from the “man who has been as big a part of the industry’s success as anyone” (Ryan Seacrest).
Alle bekijken
click to open popover

Alex C
5,0 van 5 sterren A must buy
3 oktober 2019 - Gepubliceerd op Amazon.com
Geverifieerde aankoop
I’m not writing this because he’s my husband, I’m writing this because I saw all the time and energy he put into this book. Elvis would spend late nights from our tent in Africa on vacation to waking up in the middle of night just to write notes. I saw a different side of him when he was reliving past events in his life for this book. I admire him so much for being open and honest and giving his fans a deeper perspective of his life. I love you E. Xoxo
Meer lezen
406 mensen vonden dit nuttig
Vertaal recensie in het Nederlands

Shane
5,0 van 5 sterren Love the show?? Buy the book!!
2 oktober 2019 - Gepubliceerd op Amazon.com
Geverifieerde aankoop
I have been listening to Elvis for about seven years now. When I heard he had a book coming out I had to have it. It was released today. The book is set to be delivered today but I couldn’t wait I bought the Audible and devoured it in one day. Listening to this feels like listening to his show for about six hours. Elvis is a great example of working hard but still able to enjoy life to The fullest. While their is no spoiled tea(which I don’t expect knowing how much of a standup guy he is) it was truly a great read. If you like Elvis you will LOVE the book!!!
Meer lezen
29 mensen vonden dit nuttig
Vertaal recensie in het Nederlands

Beth Gibbons
5,0 van 5 sterren You've got to get this book!!!
3 oktober 2019 - Gepubliceerd op Amazon.com
Geverifieerde aankoop
If you are a fan of the Elvis Duran and the morning show, this is a MUST read!!!!!
I have learned so much about Elvis and love him even more than ever before. You will not regret getting this one. I love it so much, I am going to get the audible because I want to hear him read it. I'm sure it will be a totally different feel. 😍
Meer lezen
16 mensen vonden dit nuttig
Vertaal recensie in het Nederlands

Thomas J. Kelly
5,0 van 5 sterren Where Should The Reader Begin?
3 oktober 2019 - Gepubliceerd op Amazon.com
Geverifieerde aankoop
Where Do I Begin? is more than a "Behind the Scenes" book it's a "Behind The Host" book. Radio has evolved over the years. Where Do I Begin gives you a chance to evolve with it. From local radio to syndication and all of the laughs in between. It's a 5 star book. 6 stars if you love Elvis.
Meer lezen
11 mensen vonden dit nuttig
Vertaal recensie in het Nederlands

trent
5,0 van 5 sterren Must buy!
2 oktober 2019 - Gepubliceerd op Amazon.com
Geverifieerde aankoop
Listened to Elvis for about 10 years now, I rarely read books but this was a definite but for me and it's hilarious! I was cracking up the first few pages and can't wait to read it over the next few days.
Meer lezen
11 mensen vonden dit nuttig
Vertaal recensie in het Nederlands
Ga naar Amazon.com om alle 347 recensies te bekijken 4,9 van 5 sterren
Terug naar boven
Over ons
Verkoop bij ons
We helpen je graag
© 1996-2020, Amazon.com, Inc. en dochterondernemingen