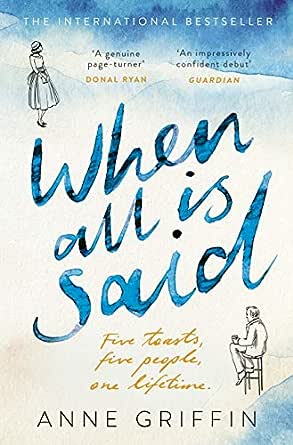 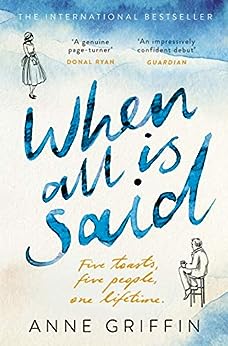 When All is Said: Five toasts. Five people. One lifetime. (English Edition) Kindle-editie

"This is how you tell a story." --Cecelia Ahern, New York Times bestselling author of PS, I Love You

"When All Is Said catches a world in a moment. Maurice Hannigan is a wonderful invention, whose bitter-sweet meditations will stay long in the reader's mind. Anne Griffin has fashioned a rare jewel." --John Banville, New York Times bestselling author of Time Pieces and Man Booker Prize award-winning author of The Sea

"In the twilight of his long and eventful life, Irishman Maurice Hannigan still possesses the deep and mellow voice that his grandmother once told him 'could melt icebergs--a voice that debut author Anne Griffin renders with wit, verve, and endearing irascibility. When All Is Said captures the texture of a night catching up with an old friend--the pleasures and comforts, the stories and surprises--one that you never want to end, and all the more bittersweet because you know, of course, that it must." --Kathleen Rooney, bestselling author of Lillian Boxfish Takes a Walk

"When All Is Said is lovely. I'm a sucker for structure and the conception of this novel, told around five toasts is just wonderful, it gives you that sense of a whole life, of someone accounting for themselves and their decisions, it takes a firm grip and draws us in. It is beautifully written, unhurried and thoughtful, a lonely man truthfully wrought and a character you love from the off, in spite of his flaws or maybe because of them." --Kit de Waal, bestselling author of My Name is Leon

"Maurice Hannigan is one of those rare and unforgettable characters whose lives we enter, inhabit for a time all too brief, and emerge from deeply changed. Anne Griffin is a writer with a bright, bright future." --National Book Award finalist Janet Peery

"When All Is Said is a hugely enjoyable, engrossing novel, a genuine page-turner. Maurice is a fabulous character, wonderfully flawed and completely engaging; his voice is familiar and real, full of sadness and regret and defiance, and unexpected tenderness." --Donal Ryan, award-winning author of The Spinning Heart

"It is difficult to believe that When All Is Said is a first novel, as Anne Griffin displays such an assured hand at locating and maintaining the voice of our lead character, Maurice Hannigan. An old widower, Hannigan picks a night at the local pub and toasts the five people who influenced his life in the most important ways, and, in the process, gives an oral first person history of his own life--both the truthful and the delusional. With an impeccable eye, Anne Griffin picks out details from seemingly-unimportant moments in a life that become so much more in her capable hands. Each toast brings a new facet of Hannigan's life into focus, sometimes shining a light on things he would rather keep buried deep within himself, and the result is quite lovely. I truly felt as if I were in a country pub, sitting with the county raconteur, and I enjoyed his company immensely!" --Bill Carl, Wellesley Books

"Griffin's portrait of an Irish octogenarian provides a stage for...the course of one memorable night."--Kirkus

"Pitch-perfect prose...Moving and beautifully written, this is a wonderfully assured debut." --Mail on Sunday

"It's all beautifully done; a tale told in the plain but poetic prose of a man who recognises the tragic truths gleaned from a life of love and loss. A gem of a book." --Sunday Express, Five Star Review

"Griffin's deeply moving debut novel highlights the power of nostalgia, the pang of regret, and the impact that very special individuals can have on our lives." --Booklist

"An atmospheric debut...The most impressive aspects of this first novel are its rich, flowing prose, it's convincing voice and it's imaginative and clever structure...Griffin is a welcome arrival to the literary scene." --Irish Times

"A proper tear-jerker, but one that will ultimately leave you feeling hopeful." --Grazia

"When All Is Said strongly recalls Graham Swift's classic Last Orders. Like that novel it fearlessly contemplates the omnipresence of the past, and the irreparable damage of secrets and lies." --Irish Examiner

"This novel is as candid a portrait of human frailty as you're likely to find. Griffin is uncannily accurate in her depiction of that peculiarly Irish emotional paralysis we're all familiar with. Maurice could be anyone's relative" --Sunday Independent

ANNE GRIFFIN is the winner of the John McGahern Award for Literature. Shortlisted for the Hennessey New Irish Writing Award and The Sunday Business Post Short Story Competition, Anne’s work has been featured in, amongst others, The Irish Times and The Stinging Fly, and she had an eight year career at Waterstones. Anne lives in Ireland with her husband and son. When All Is Said is her debut novel. --Deze tekst verwijst naar de audioCD editie.

carilynp
5,0 van 5 sterren This is what reading is all about.
11 maart 2019 - Gepubliceerd op Amazon.com
Geverifieerde aankoop
A simply beautiful book. This is Anne Griffin’s debut novel WHEN ALL IS SAID. A man looks back at his life through a series of toasts that he makes to five different people who have had an impact on his life. As he reflects on his long life, growing up in a small Irish town, about having lost his true love, about his childhood, and the success that he has achieved but not necessarily that which he is proud of. What an insightful, contemplative story of a man who has been brought to his knees with intense physical and emotional pain, and yet, exquisite love. Not quite sure how to come to terms with where his life has come to, and not necessarily wanting to make amends or change things, but more to just be honest with himself, this is his last hurrah. There is a true beauty in the slow reveal of a life. Of the domino effect that one small move can have on a series of things. A story that causes you to think about your own actions and how your every move touches another’s. Maurice’s character might bring you to laugh, cry, want to hold his hand, and perhaps, sidle up to the bar and share a fine glass of whiskey with him. WHEN ALL IS SAID is what reading is all about.
Meer lezen
40 mensen vonden dit nuttig
Vertaal recensie in het Nederlands

gammyjill
5,0 van 5 sterren Superb first novel...
8 maart 2019 - Gepubliceerd op Amazon.com
Geverifieerde aankoop
Maurice Hannigan has decided to end his life and has made plans to do so. The County Meath farmer/entrepreneur has been a success since long before the "Celtic Tiger" had roared in the 1990's and he is the main character in Anne Griffin's superb novel, "When All is Said". Griffin uses Maurice's suicide note to his Kevin, his only child, to fill out the details of Maurice's life and his deep connections with his family and friends.

Maurice is thinking about the five most important people in his long life. The book dwells on those now mostly long-dead individuals who Maurice has carried with him throughout his life. They include his older brother - his mentor and protector when he was growing up and the daughter, Molly, who was delivered still-born to he and his wife and who remains with him and even ages as he does. The others, his late wife, his mentally impaired sister-in-law, and his son, all play a huge part in Maurice's rise.

While these five individuals have been influencial to Maurice, maybe the most important object was a silver coin. This coin, which pictured the future King Edward VIII, was the catalyst of the abject ruin that came to the Dollard family, the local wealthy family. Both Maurice and his beloved mother had been employed by the Dollards and Maurice was often the victim of beatings by the Dollard son. Much of Maurice's life was devoted to bringing the family down, which he did, with mixed results.

Basically, though, Maurice Hannigan lived a good life, giving back to the community in which he lived. He loved his wife and was a good husband. Anne Griffin's wonderful book gives the reader Maurice and "his" Ireland.

Mary C. Philp
5,0 van 5 sterren A very moving book
7 maart 2019 - Gepubliceerd op Amazon.com
Geverifieerde aankoop
I loved this book and could not put it down. I think it is one of the best books I have read dealing with grief and loss. A man sitting in a bar drinks a toast to the significant people in his life as he reviews his 82 years of life. He tells us about all the highs and lows with laughter and with tears. I highly recommend.
Meer lezen
20 mensen vonden dit nuttig
Vertaal recensie in het Nederlands

Mary Lins
5,0 van 5 sterren Sit Down Next to Maurice and Hear His Toasts
13 maart 2019 - Gepubliceerd op Amazon.com
Geverifieerde aankoop
I love Irish writers and stories set in Ireland – running the literary gamut from Maeve Binchy to John Boyne. Now I’ll add Anne Griffin to that list! “When All is Said” is beautifully written, poignant, captivating, and ultimately surprising.

Eight-four year old, Maurice Hannigan, sits at the bar of the Rainsford House Hotel in Rainsford County, Ireland, two years since his wife Sadie died (“It feels like a lifetime to me.”) He’s sold everything, and booked the Honeymoon suite for the night. Somethings up – maybe something bad – but we are already captivated by Maurice’s narrative voice – we can hear it in our head as we read – his Irish accent and syntax and his beautiful (and surprisingly youthful) “broadcasting” voice.

Reader, I felt as if I was sitting next to him at the bar as he proceeded to recount his life to his absent son, through five toasts to the five people who mattered most to him in life. Maurice’s honesty about his failings and mistakes, along with his great loves, won’t fail to touch your heart.

Kindle Customer
5,0 van 5 sterren Lovely
24 maart 2019 - Gepubliceerd op Amazon.com
Geverifieerde aankoop
This book broke my heart in a good way if that makes any sense. The book begins at 6:25 pm with 84 year old Maurice Hannigan sitting in the bar of the Rainsford House Hotel in Rainsford, Co. Meath, Ireland. His wife died two years earlier, he has packed his belongings, sold his property and given away his dog. I'm thinking that he is planning to end his life at the end of the night. It breaks my heart because I already care about him. But before he goes he will drink a toast to each of the five people that have meant the most to him and in his mind he tells his son their stories.
Meer lezen
13 mensen vonden dit nuttig
Vertaal recensie in het Nederlands
Ga naar Amazon.com om alle 242 recensies te bekijken 4,5 van 5 sterren
Ontdek het beste van shopping en entertainment
Gratis en snelle bezorging van miljoenen producten, onbeperkt streamen van exclusieve series, films en meer
> Ontdek Prime
Terug naar boven
Over ons
Verkoop bij ons
Amazon-betaalmethoden
We helpen je graag
© 1996-2020, Amazon.com, Inc. en dochterondernemingen