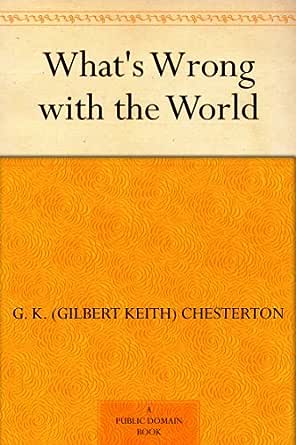 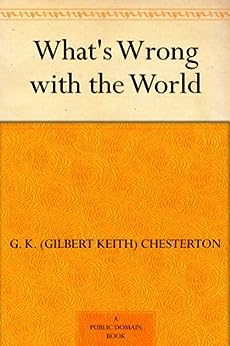 Star Quest
3,0 van 5 sterren A little outdated but quite insightful
14 mei 2017 - Gepubliceerd op Amazon.com
Geverifieerde aankoop
I had to read this book with a slight grain of salt considering it was written over 100 years ago. It’s obvious that times have changed and thankfully some of the issues of that time period are now obsolete. With that being said, the first third of the book really appealed to me especially in the realm of philosophy and political thought. The rest of the book was a bit more difficult to read through and digest. Overall it was a decent read and quite an insight into one of the greater minds of the 20th century. My biggest take away was a quote from the beginning of the book which stated, “I have called this book ‘What Is Wrong with the World?’ and the upshot of the title can be easily and clearly stated. What is wrong is that we do not ask what is right.” This really resonated with me. It’s easy to see the world for its brokenness. But looking through history, a lot of significant strides were made and it’s easy to lose sight of that. Regardless of how bad things are, they were a lot worse hundreds and even thousands of years ago. I appreciate that reminder.
Meer lezen
24 mensen vonden dit nuttig
Vertaal recensie in het Nederlands

Elena M. Miller
5,0 van 5 sterren I thoroughly enjoyed this collection of essays
27 december 2016 - Gepubliceerd op Amazon.com
Geverifieerde aankoop
I thoroughly enjoyed this collection of essays. There may be certain points on which many readers will disagree with Chesterton, such as on gender roles, or with which they become uncomfortable, such as when he uses the word "savages", but if you are familiar with works of older centuries I believe you'll appreciate his intentions. At no point did I see blatant attacks of hatred; rather, Chesterton is proud of Western civilization and defends it in comparison to other cultures, which at the time of writing had taken a back seat. Anyway, no matter what your sensitivities may be, no one can deny that Chesterton has a way of making his points with such levity, in a rambling conversational tone, that the point is made before you realize where that giant page of a paragraph is headed. His writing always engages. One of my favorite passages seemed archaic and probably elitist, but it's one of my favorites: Chesterton compares an umbrella to a walking stick and observes that often the most useful things are so commonplace that we take them for granted and neglect to appreciate them, while we cherish impractical objects of pleasure. He continues on this for a very compelling case. I wish I could do it justice! Anyway, I recommend it wholly :)
Meer lezen
21 mensen vonden dit nuttig
Vertaal recensie in het Nederlands

Paola
5,0 van 5 sterren Just Great
25 januari 2014 - Gepubliceerd op Amazon.com
Geverifieerde aankoop
I think you either like GK Chesterton's style or you don't. This was my pick for book club and most of the ladies in the group disliked it. (They seem to be stuck on Oprah Book Club picks. Yuk.) However, at least one of them is now hooked on GK Chesterton. Her comment, said in awe: "People today don't think like this. They don't delve into subjects so thoroughly." This was my first Chesterton read and it took me about two or three essays in to figure out his wicked sense of humor. From there on, it was a delight to read. He really has a very logical mind, a clear way of presenting his arguments, and that ever-present sense of humor. It was startling how many of the topics he touched on in this book, written around 1910, are still relevant today. Some things never change.
Meer lezen
59 mensen vonden dit nuttig
Vertaal recensie in het Nederlands

swp
5,0 van 5 sterren One of the best books ever
6 februari 2013 - Gepubliceerd op Amazon.com
Geverifieerde aankoop
Chesterton was a genius. This book is timeless, prophetic, and hilarious. He takes a very no-nonsense approach to life, morals and society. Of course, he makes some references that make you realize that it was written in the early 1900's, but nearly all of it is applicable today. Don't let the title distract you...he presents his world view in a way to get you to think very seriously about what your own is, and what it should be. Don't let the humor fool you...he tackles serious subjects in a deep, thought-provoking way. Yes, you can lightly read it just for the entertainment, but do yourself a favor and do a thorough study of his writing. You'll get a lot out of it, as well as a chuckle or two. Some may superficially think he has an archaic, repressive view of women; read deeper, and you will see how much he values and reveres women. I love the part about how men put on skirts when they wish to impress others! This book is free, but would be worth any price.
Meer lezen
37 mensen vonden dit nuttig
Vertaal recensie in het Nederlands
Ga naar Amazon.com om alle 130 recensies te bekijken 4,3 van 5 sterren
Terug naar boven
Over ons
Verkoop bij ons
We helpen je graag
© 1996-2020, Amazon.com, Inc. en dochterondernemingen