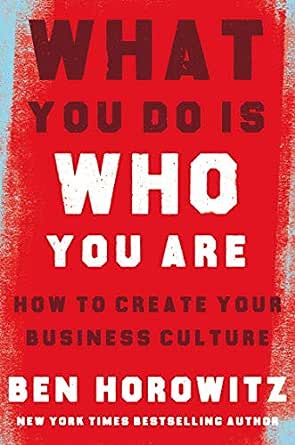 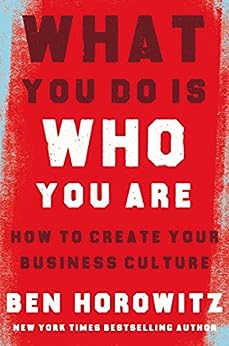 What You Do Is Who You Are: How to Create Your Business Culture (English Edition) Kindle-editie

Ben Horowitz, a leading venture capitalist, modern management expert, and New York Times bestselling author combines lessons both from history and modern organisational practice with practical and often surprising advice to help us build cultures that can weather both good and bad times.

The times and circumstances in which people were raised often shape them – yet a few leaders have managed to shape their times. In this follow-up to the bestselling business classic The Hard Thing About Hard Things, Ben Horowitz turns his attention to a question crucial to every organisation: How do you create and sustain the culture you want?

This book is a journey through cultures ancient to modern, spotlighting models of leadership and culture-building from the samurai to prison gangs. Along the way, it answers fundamental questions: Who are we? How do people talk about us when we’re not around? How do we treat our customers? Can we be trusted?

Because who you are is not the values you list on the wall. It’s not what you say in a company-wide meeting. It’s not your marketing campaign. It’s not even what you believe. Who you are is what you do. This book will help you do the things needed to become the kind of leader you want to be – and others want to follow.

Julia Gaffield
1,0 van 5 sterren Lessons in Leadership Conservatism
18 november 2019 - Gepubliceerd op Amazon.com
Geverifieerde aankoop
In What You Do Is Who You Are, venture-capitalist and NYT best-selling author, Ben Horowitz, turns to history to teach CEOs and business leaders how they can shape and change the cultures of their companies. His first of four models is Toussaint Louverture, a military and political leader in the Haitian Revolution (1791-1804).

In the eighteenth century, sugar took over the economy of the western hemisphere and the heart of this exploitative system was France’s Caribbean colony, Saint-Domingue (modern day Haiti). Occupying the western third of the second largest island in the Caribbean, the French violently forced enslaved Africans to plant, harvest, and process sugar cane.

Enslaved people resisted this oppressive system whenever they could, but punishments were severe and painful, often life-ending. In 1789, when France was in revolutionary turmoil, the disenfranchised free people of color in the Caribbean began breaking down the rigid hierarchy of the 18th century and called for equal rights as free Frenchmen. Enslaved people seized this opportunity to save themselves and eventually to overthrow the entire wretched system—this event has come to be known as the Haitian Revolution.

Horowitz argues that Toussaint Louverture’s leadership in the Haitian Revolution demonstrates that revolutionary cultural change is possible, even in the most extreme circumstances.

The takeaway for leaders is that you can “make your own culture do what you want it to,” if you apply these lessons.

The bad news is that Horowitz’s analysis of the revolutionary change in Haiti is limited by his (mis)understanding of the lives of the enslaved people in colonial Haiti. “Slavery chokes the development of culture,” he argues, “by dehumanizing its subjects.” That was indeed the intent in many slavery societies, but enslaved people have never been culture-less. What Horowitz frames as revolutionary change is instead a cherry-picking of Louverture’s policies that, in fact, (in a modified version) maintained the status quo.

By denying the humanity of enslaved men and women, Horowitz then seeks to understand how Toussaint Louverture “reprogrammed slave culture.” In doing so, Horowitz taps into 19th century civilization discourse by arguing that Louverture “elevated their culture” to the level of French citizens. According to Horowitz, Louverture had successfully “transform[ed] slave culture into one respected around the world.”

The most grotesque example in the chapter “Toussaint Louverture Applied,” is Horowitz’s championing of the unique company culture at Amazon today that emphasizes “frugality.” Horowitz connects this with the lesson from Louverture that it’s important to create “shocking rules.” The shocking rule at Amazon is that no one is allowed to use a PowerPoint presentation.

Horowitz doesn’t analyze the diplomatic strategy or context of Louverture’s leadership, and neither does he discuss the effects of Amazon’s obsessiveness with frugality that set the stage for horrific working conditions for employees.

By transcending time and space and by distorting Louverture’s story so thoroughly, Horowitz is able to use the Haitian Revolution to champion a company known now for labor and human rights abuses for the benefit of the predatory leadership. This is the story you’d tell of the Haitian Revolution is you wanted to void it of its most revolutionary characteristics. In other words, Horowitz actually teaches about leadership conservatism in the face of popular transformations.

The good news is that the premise of Horowitz’s book is commendable; the past can and should suggest promising ways to question and shape the present. What, then, can we learn from the Haitian Revolution to help us address 21st century questions of leadership and company culture?

CEOs would do well to learn about the rank-and-file soldiers of the Haitian Revolution and the men and women who escaped into the woods to avoid French and Haitian rule. Leaders today could study the field workers who constantly resisted being forced back onto the plantations that they had just burned to the ground.

These men and women first changed the culture of the colony and then shaped that of the new country by relentlessly fighting for their vision of freedom—most explicitly seen in the “lakou” (the yard), a community-based social, familial, and economic way of life centered on subsistence farming and personal and social sovereignty.

The evidence of the Haitian Revolution suggests that leading cultural change depends on an integrated “top down” and “ground up” strategy that understands the existing culture rather than--as Horowitz suggests--trying to “reprogram” it.

Francesco S. Pasqualini
5,0 van 5 sterren A no BS treaty for understanding, building, and eventually changing the culture of an organization
30 oktober 2019 - Gepubliceerd op Amazon.com
Geverifieerde aankoop
Ben Horowitz writing style, honestly raw attitude, and carefully considered choice of topics and examples makes the book very pleasant to read. And gives you a lot to think about, which is the whole point after all!
Meer lezen
18 mensen vonden dit nuttig
Vertaal recensie in het Nederlands

Nathan S. Collier
4,0 van 5 sterren Hoary old technique: dredge up historical figures, project traits aligning w author's message
7 november 2019 - Gepubliceerd op Amazon.com
Geverifieerde aankoop
It's a good book, the reason it got 4 stars instead of 5 is that Ben (or his co/ghost author?) felt compelled to follow that hoary old technique of dredging up a handful of historical figures and projecting traits on to them that allow you to espouse the principles you wish to proclaim.

Lots of good stuff, just have to mine it out from all the filler
Meer lezen
16 mensen vonden dit nuttig
Vertaal recensie in het Nederlands

Fatmonky
5,0 van 5 sterren Probably the most important book for leaders
3 november 2019 - Gepubliceerd op Amazon.com
Geverifieerde aankoop
I read this, and think this is one of the most important books for managers and leaders (aspiring and future) to read, together with Grove's "High Output Management", Horowitz's other book "Hard Thing about Hard Things", and Mintzberg's "Simply Managing".
But I would say that this book trumps the others, because a culture is what makes an organization tick even if the leaders are not there. As leaders are the stewards and gardeners of the organization culture, this makes this book even more important than the others above.
Meer lezen
13 mensen vonden dit nuttig
Vertaal recensie in het Nederlands