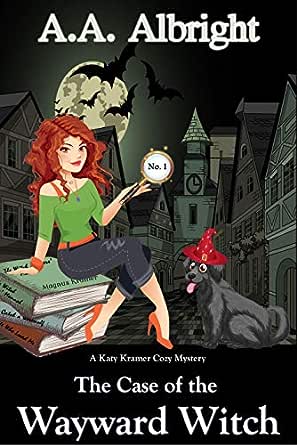 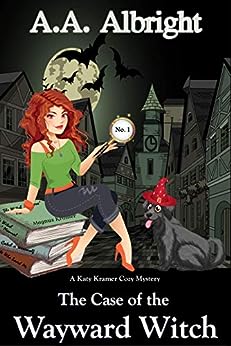 Witches are supposed to be the bad guys, right?

In the Kramer family, everyone is a witch hunter – well, everyone except the women. But with Uncle Faster out of action, and a boyfriend-killing witch on the loose, it might finally be Katy’s time to shine.

Going deep undercover at a necromancy supply store seems like a terrifying plan, but Katy soon discovers that her new friends and neighbours aren’t quite as evil as she was led to believe. She begins to suspect that she might be tracking the wrong witch, after all.

Will Katy discover the real killer in time? And will she prove, once and for all, that women are up to the job?

In the latest tale from A.A. Albright, you’ll meet the feisty Katy Kramer, a wizard-turned-dog called Hamish, a sarcastic cat called Cleo, and a whole new cast of characters. A few old favourites might also pop in to say hello …

LMS
4,0 van 5 sterren New cosy mystery series from A A Albright
29 juli 2019 - Gepubliceerd op Amazon.com
Geverifieerde aankoop
A fun cosy mystery. I don't think I like the character as much as Wanda in the Wayfair series, and the ending was a little abrupt, but I'm sure I'll inevitably be reading the next in the series.
Meer lezen
Vertaal recensie in het Nederlands

Kindle Customer
5,0 van 5 sterren Really enjoy these books
4 augustus 2019 - Gepubliceerd op Amazon.com
Geverifieerde aankoop
I am so looking forward to reading more of this series. I really enjoy her others series and think this makes a great addition.
Meer lezen
Vertaal recensie in het Nederlands

Shawn McDowell
5,0 van 5 sterren Katy Kramer cozy mystery
24 juli 2019 - Gepubliceerd op Amazon.com
Geverifieerde aankoop
At first the book to off to slow start but I kept reading it anyway and I am glad that I did. This is going to be a very good series to read.
Meer lezen
Vertaal recensie in het Nederlands