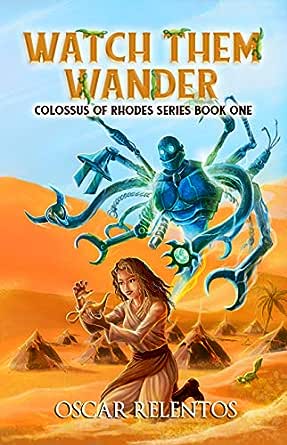 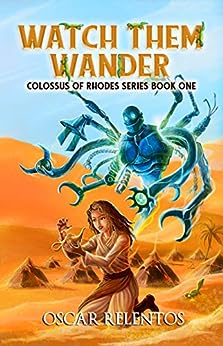 Samantha is not living the life she thought she was living.

Teenager Samantha Rhodes has wandered the desert since her war-torn childhood in bleakest solitude, until the day she discovers an animatronic genie in the sand capable of reversing her fortunes, and fulfilling her wildest wishes.

After a chance encounter with a starving stranger named Ryder begging for help from a distant village, Samantha and her genie Adam rediscover the outside oases in all their revenge-driven brutality. And from the curious way the lizards and birds watch her with glassy eyes, the way the stars in the sky grow exponentially in number during nights of tragedy, and the way captured raiders whisper of a blue goddess wandering in the darkness, Samantha finds herself drawn deeper into a superstitious world filled more with mystery than with terror. And within the wreckage of secret, ancient tunnels beneath the moonlit sands, Samantha discovers why the god of her oasis has given her a magical, weaponized genie.

Along with the frightening truth about the stars in their midnight skies.
click to open popover

Ruth Crothers
4,0 van 5 sterren Fast, enjoyable read that I couldn’t put down.
10 oktober 2018 - Gepubliceerd op Amazon.com
Geverifieerde aankoop
I came here last night after reading a thread posted to Reddit, mostly chasing a rabbit hole, but I got sucked in to the story. The writing is simple and it makes for a fast and enjoyable read. The story is very interesting and layered, my only dislike is that I have to wait a couple days for the second book.
Meer lezen
3 mensen vonden dit nuttig
Vertaal recensie in het Nederlands

Timothy E. Kelly
4,0 van 5 sterren Great Read
13 december 2018 - Gepubliceerd op Amazon.com
Geverifieerde aankoop
I was recommended this book by Reddit and it did not disappoint. I'll be honest, I don't read often and I've only read a handful of books so I don't have the largest of libraries under my belt, but I genuinely enjoyed reading the beginning to this series. The only reason I didn't give it a 5 is because a 5/5 would mean it was perfect. I'll have to say that at times I had to go back and re-read certain sections as I felt they didn't make sense. Some typos(very few) and some misspellings were present. Overall, I enjoyed the read and I see myself purchasing the next book in the series.
Meer lezen
Vertaal recensie in het Nederlands

PNWT
2,0 van 5 sterren Not great
17 oktober 2019 - Gepubliceerd op Amazon.com
Geverifieerde aankoop
I vaguely remember this book starting as a reply to a writing prompt on reddit, and it's about the same quality as most of those. The plot is essentially one long cliché that borrows from a number of young adult novels, and never really manages to contribute any new ideas. Dialogue is stilted, and character development is more or less nonexistent. See: /r/menwritingwomen.

I truly regret the time spent reading it.