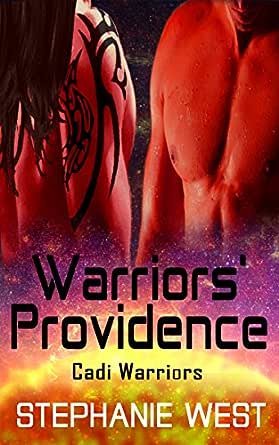 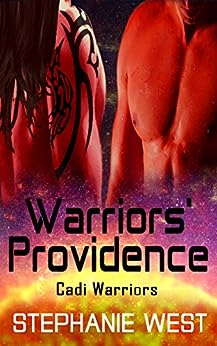 Providence worked hard to become one of the first women to join her pararescue squad. It was difficult being one of the guys, and yet not, all at the same time. But Providence was up for the task. Besides, there was nothing more satisfying than helping your fellow man. It was what she was born to do. Never in a million years did Providence expect to find herself abducted from a routine mission off the Florida coast by...ALIENS.
Dagaa and Madhava, once enemies, became fast friends, after a centuries long civil war. Both of them were beyond ready to see Cadi enter a new era. But now they face a new battle, convincing all of Cadi to embrace and rescue the Toufik, their former slaves, from a dying planet. It wasn't going to be an easy task. Infighting threatened their hard-won peace, and put Cadi at risk from a new foe.
With so much at stake, Madhava and Dagaa are blindsided when they find a fiery-haired human female on their enemy's ship. Providence's bold and loving nature awakens a side that both warriors had long since forgotten. The only problem, can Dagaa and Madhava share her affection, and can Providence withstand the love of not just one, but two overprotective warriors?
Only fate knows a warrior's providence.

Caution – This book has adult content.
This previously published story has been newly edited.
click to open popover

What I liked:
I like some action to my Sci-fi Romance stories. There was action in this story but I felt that it started out too slow. The "good stuff" didn't start until after the 50% area.

As well as in book one there seemed to be a connection that developed between the protagonists (not insta-love but it was pretty quick).
The 'triple' 🤔 points of view seemed to work well in this story.
Plot was interesting and moved quickly after the initial lag.
S*x scenes were spicy and detailed.
Character definition and development was very good.
World building was detailed enough to give the reader an idea of what the environment looked like but not overly done to be boring and tedious.
There were scenes that had me laughing as well as suspenseful scenes that kept me interested in the story.

What I didn't really care for:

The beginning seemed to lag a bit but otherwise I felt it moved along well.

I will be reading more from Stephanie West.

Similar to the first book, this one was riddled with punctuation errors and missed words and phrases. The characters are great, and I'm a sucker for military heroines. The fact that Providence was trained for her adventures made this book a lot easier to get into than the first one. And like the first one, the hot bits are hot. Although I enjoyed the 'set society expectations' on its head aspect of Providence running counter the submissive nature of the alien females on her new planet, I found myself frowning at the dismissive attitude toward the less-aggressive alien females. I'm not a fan of the 'one perfect type of woman' format. (Or any other subset of people).

The book and the heroine would have been more interesting if there had been a valuable female character who was comfortable in a more reticent and beta role.
Meer lezen
Een iemand vond dit nuttig
Vertaal recensie in het Nederlands

Kindle Customer
4,0 van 5 sterren Double whammy
25 februari 2018 - Gepubliceerd op Amazon.com
Geverifieerde aankoop
It kept with the action storyline.
Providence bonds with two males.
A review I read before purchasing this book almost made me not buy it. I'm glad I did. The steamy scenes started around 30% into the book and not 50% as the review said.
Providence also doesn't think she's better than the other females. Aside from Giselle there's not much interaction with the other females and she's so happy to see another human that they quickly become good friends.
I enjoyed this book bit like the previous one it needs editing.
Meer lezen
Vertaal recensie in het Nederlands

But, there are proofreading errors. And there are editing errors (I swear that most of sentences contained the Herione's name). Be aware that this book has strong language and M/F/M sexual scenes.

I consider these to be entertaining for quick, spicy reads. I will probably continue this series.
Meer lezen
Een iemand vond dit nuttig
Vertaal recensie in het Nederlands

Diane Shaner
5,0 van 5 sterren Cadi Warriors are strong and sexy heroes
20 februari 2017 - Gepubliceerd op Amazon.com
Geverifieerde aankoop
Since the Toufik males helped Daimio Kadan win the Cadi civil war it is only right the Cadi attempt to save the race. The adventure of Providence, Dagaa and Madhava will have you on the edge of your seat. Let Ms. West take you on a sexy and at times scary ride to save the gentle Toufik race. This is the second book of the Cadi Warrior Series and is just as good as the first. The characters are strong and the story line is well though out. I can wait to start the third book in the series because Stephanie West has me hooked.
Meer lezen
Vertaal recensie in het Nederlands
Ga naar Amazon.com om alle 42 recensies te bekijken 4,2 van 5 sterren
Terug naar boven
Over ons
Verkoop bij ons
We helpen je graag
© 1996-2020, Amazon.com, Inc. en dochterondernemingen