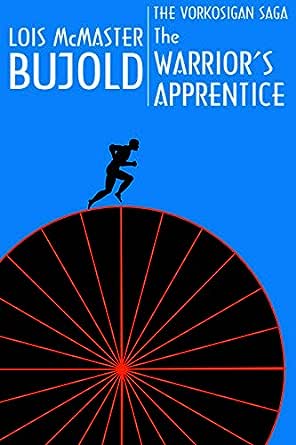 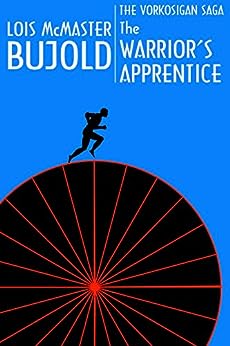 Mal Warwick
4,0 van 5 sterren A whole lot of fun!
25 september 2017 - Gepubliceerd op Amazon.com
Geverifieerde aankoop
If you're looking for escapist entertainment, and if science fiction strikes your fancy, you'll enjoy the long series of novels in the Vorkosigan Saga by Lois McMaster Bujold. The Warrior's Apprentice, the fourth book in the series' chronology, is a case in point.

In the preceding entries in the series, we learned the backstory of its central figure, Miles Vorkosigan. He is the son of one of the most senior military and political leaders on the planet of Barrayar, Aral Vorkosigan, and Cordelia Naismith, a scientist and unwilling soldier who is a former enemy from the far more technologically advanced Beta Colony. In a failed assassination attempt on his father, Miles is crippled in his mother's womb by poison gas. His life has been saved only by Betan technology and a courageous local physician. But he was born a virtual dwarf, less than five feet tall, and with bones so brittle they break when he falls or one of his limbs is squeezed too strongly. Miles compensates for these disabilities with a brilliant mind, a copious memory, and a genius for military strategy that allows him to gain the allegiance of the toughest professional soldiers.

Miles is surely one of the most off-beat and intriguing protagonists in all of science fiction. No doubt, the strange attraction we all feel to Miles explains how the author has been able to produce (to date) a total of at least sixteen novels in the series, plus a large number of novellas and short stories. And she has won numerous awards for her work.

In The Warrior's Apprentice, seventeen-year-old Miles washes out of officer training for the Barrayaran military when he breaks both legs in leaping off a wall in an obstacle course. Freed from the strictures of the military, Miles sets out on a visit to his grandmother on distant Beta Colony. His bodyguard, Sergeant Konstantine Bothari, and the sergeant's eighteen-year-old daughter, Elena, accompany him on the journey. No sooner do they arrive than Miles manages to embroil himself in rescuing an old starship pilot. Brashly, he buys the pilot's ship to save it from salvage—with money he doesn't have. This foolish act triggers a series of misadventures that begin Miles' long trek to galactic fame.

I've reviewed all three of the preceding novels in the Vorkosigan Saga. I enjoyed them all, and you will, too, so long as you don't expect to gain any deeper meaning from the experience.
Meer lezen
9 mensen vonden dit nuttig
Vertaal recensie in het Nederlands

Ellen
5,0 van 5 sterren Fabulous series
20 december 2018 - Gepubliceerd op Amazon.com
Geverifieerde aankoop
The Vorkosigan saga, is a fabulous series, and I have it all, in either paperback, or hardback. But somehow I managed to lose The Warrior's Apprentice, and it is a critical book in the series. I was thrilled to find it from this Amazon seller, who got it to me in record time, and in good shape, and at a reasonable price. I have decided to read the series in order while I'm laid up after surgery, and The Warrior's Apprentice is next. FYI, it introduces Miles Vorkosigan, who will be our central character in most of the books. This is sci-fi at it's best, but written w/ a sensitivity, morality, and sense of honor that cuts through all genres.
Meer lezen
3 mensen vonden dit nuttig
Vertaal recensie in het Nederlands

Paul Meyer
5,0 van 5 sterren What to say? The premiere space opera of our day, by the premier SF & Fantasy author of our day
12 mei 2019 - Gepubliceerd op Amazon.com
Geverifieerde aankoop
I'm really at a loss for anything to say that I'm sure hasn't been said many times. Bujold is a skilled, careful, thoughtful writer and I've liked everything she's done that was in a genre I enjoy. She really grasps the evolution of a personality over time, and watching Miles grow from this book through his pivotal "mid-life crisis" and into his adulthood has been one of my joys and a growth experience for me as a reader.
Meer lezen
2 mensen vonden dit nuttig
Vertaal recensie in het Nederlands

A. Sutt
4,0 van 5 sterren Okay, I'm hooked.
6 maart 2014 - Gepubliceerd op Amazon.com
Geverifieerde aankoop
Yes, I liked Cordelia's arc a little more, but Miles is a riot. Just as fun to read as his mother, really. He's a genius. I saw another review complaining of a lot of deus ex machina, but as a writer I know you're building a series of events and of course they're going to form to where the story needs to go. Maybe I can just suspend my disbelief more easily or I was thrilled enough by the lucky turns and didn't notice. Anyway, yes Miles always lands on his feet somehow, but not without a lot of flailing around on the way, and that makes him human enough to appeal to me. The kid has some charisma, but I guess it's from having to rely on smarts and charm instead of physical ability and good looks (I think Cordelia said in the epilogue of Barrayar that he honed his charm during the time he spent before being able to actually walk).

In any case, I'll keep on with the series until it gets annoying or stops being good or whatever, but I'm curious to read the further adventures of Miles.
Meer lezen
Een iemand vond dit nuttig
Vertaal recensie in het Nederlands

Amazon Customer
5,0 van 5 sterren Science fiction with real depth of characterization
7 december 2013 - Gepubliceerd op Amazon.com
Geverifieerde aankoop
The technology and the action - which are interesting and exciting - are all at the service of the story and the characters, who are real. (Do you ever wonder about all those people in books who understand their motivation and explain it to you? Have they all spent time in psychotherapy? Or, on the other hand, the idiots who could solve their problems by simply telling the truth to each other, but never do.) The protagonist, Miles Vorkosigan, is a genius: I love reading about smart people. On the other hand, he could be played by Peter Dinklage in the movie version (please, please!) so that keeps things interesting.
This is a great place to begin your addiction to the entire Vorkosigan Saga - there's probably a dozen of them (no waiting for the author to get around to writing the next one, one of the joys of reading older books.)
Meer lezen
Een iemand vond dit nuttig
Vertaal recensie in het Nederlands
Ga naar Amazon.com om alle 173 recensies te bekijken 4,4 van 5 sterren
Ontdek het beste van shopping en entertainment
Gratis en snelle bezorging van miljoenen producten, onbeperkt streamen van exclusieve series, films en meer
> Ontdek Prime
Terug naar boven
Over ons
Verkoop bij ons
Amazon-betaalmethoden
We helpen je graag
© 1996-2020, Amazon.com, Inc. en dochterondernemingen