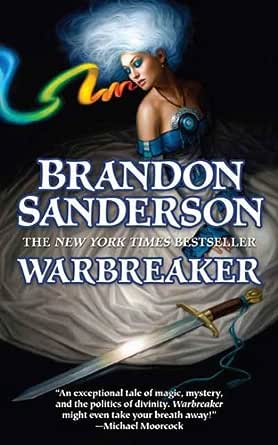 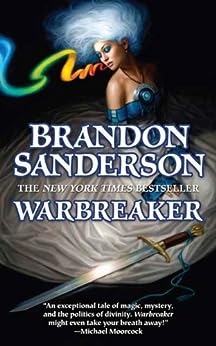 "Not only has Sanderson drawn a freshly imagined world and its society, he has also given us a plot full of unexpected twists and turns. . . . Anyone looking for a different and refreshing fantasy novel will be delighted by this exceptional tale of magic, mystery and the politics of divinity. Warbreaker might even take your breath away." --Michael Moorcock

"Hilarious dialogue, descriptive action sequences, and genuinely sweet romance. . . . Sanderson knows how to wrap things up cleanly. He spins a world that's easily complex and mysterious enough to warrant sequels, but prefers to end it climactically, answering many of his biggest questions, while leaving others to the imagination." --The Onion on Warbreaker

"Sanderson is clearly a master of large-scale stories, splendidly depicting worlds as well as strong female characters. . . . May the author write long and prosper." --Booklist on Warbreaker

"A highly readable and compelling stand-alone volume from the acclaimed author of the Mistborn trilogy. . . . Highly recommended to fans of epic fantasy." --The Romantic Times BOOKreviews 4 1/2 Stars TOP PICK!

From #1 New York Times bestselling author Brandon Sanderson, Warbreaker is the story of two sisters, who happen to be princesses, the God King one of them has to marry, the lesser god who doesn't like his job, and the immortal who's still trying to undo the mistakes he made hundreds of years ago.

Their world is one in which those who die in glory return as gods to live confined to a pantheon in Hallandren's capital city and where a power known as BioChromatic magic is based on an essence known as breath that can only be collected one unit at a time from individual people.

By using breath and drawing upon the color in everyday objects, all manner of miracles and mischief can be accomplished. It will take considerable quantities of each to resolve all the challenges facing Vivenna and Siri, princesses of Idris; Susebron the God King; Lightsong, reluctant god of bravery, and mysterious Vasher, the Warbreaker.

Other Tor books by Brandon Sanderson

The Mistborn trilogy
Mistborn: The Final Empire
The Well of Ascension
The Hero of Ages

Mistborn: The Wax and Wayne series
Alloy of Law
Shadows of Self
Bands of Mourning

Other books by Brandon Sanderson

At the Publisher's request, this title is being sold without Digital Rights Management Software (DRM) applied.

Art W.
5,0 van 5 sterren If you're looking for a Brandon Sanderson book to start with, this is the one that I recommend.
20 juni 2016 - Gepubliceerd op Amazon.com
Geverifieerde aankoop
Warbreaker is, thus far, my favorite book written by Brandon Sanderson.
Although I feel that his writing style is consistently engaging, this book resonated even more with me than usual.

Here we follow two princesses (sisters) a demi-god named Lightsong and a mysterious character named Vasher. One of the things that I love about this book is that even though we're introduced to a whole new world and magic system I feel like he doesn't waste any time with world creation. What I mean by that is that from the get-go it (the book) grabs at you and you never feel (at least I never did) that the story has stalled as more details about his new world are explained. Rather, you learn as you go.

It's full of twists and surprises, the characters you think you'll love/hate often aren't those that you would expect. I hate spoilers in reviews, so I don't feel that I can say anymore

Even though it is connected to most of the other books he's written (e.g., it's part of the Cosmere Universe) as a stand-alone book it is a quick read that can be picked up without any prior knowledge of any characters from the Mistborn books or Stormlight Archives. If you're interested in reading a Brandon Sanderson book without making a big reading/time commitment, this is probably the one that you should start with.

I love this book and highly recommend it to others. However, books are tricky, and I recognize that not everyone is going to like the same books and things that I do. So, of course I can't guarantee that others will love it, but I can promise that if you read it you will at least see how a master storyteller weaves his tale together.
Meer lezen
61 mensen vonden dit nuttig
Vertaal recensie in het Nederlands

Sammie B.
5,0 van 5 sterren Fabulous characters, interesting plot -- everything you've come to expect from Sanderson
30 september 2018 - Gepubliceerd op Amazon.com
Geverifieerde aankoop
My husband’s been trying to get me to read this book for, like, five years because he said I’d like it … and he was so right. Warbreaker has pretty much everything you’ve come to expect from a Brandon Sanderson book: deep and delightful world-building, a complex and intriguing plot, and a cast of fabulously gray characters that you can’t help but want to hang out with. Yes, even if that means forfeiting your life. Probably. I mean, there’s the tiniest offchance that you might survive, and isn’t that worth it?

- Siri is a delight. I mean, who doesn’t love a bad-ass female lead? I mean, you’ve got to give her credit. She tries awfully hard to be the frail, innocent damsel in distress. It’s not her fault that she’s incredibly bad at it. In fact, the only thing she’s been really good at her whole life is being insignificant, because being the youngest of four children (three girls and a boy), that makes her dispensable. Which is a great position to be in because yay, freedom! Until, suddenly, she’s not. Siri is thrown into an impossible situation, at just 17: stop the war, save her people … preferably don’t die? The last one was sort of optional.

- There's a talking sword, and I do love talking swords. His name is Nightblood, and I totally want one. It seems like every talking sword I read/see is snarky in some way. Is that a prerequisite? Maybe there’s something in the process of a making a talking sword that automatically snaps their emotional lever off at delicious sarcasm. Either way, I’m all for it! We learn more about Nightblood as the story continues, and his backstory/origin is hinted at, but I thought his personality was brilliant.

- ASSASSINS! Oh, wait, that doesn’t tell you anything, does it? AWESOME ASSASSINS! The best part about Denth and Tonk Fah is they’re enlightened assassins. They realize what a short straw their profession has drawn. Why is it that no one believes them? Or trusts them? Or always suspects them of being lying, murdering swindlers with no morals but money? GOSH. Their banter is hilarious. I couldn’t wait for them to pop up again, just to see what they’d have to say again. Their dark humor and sarcasm is delicious, and they were easily my favorite characters in this book just for that. I couldn’t stop laughing.

- I’m fairly certain Lightsong the Brave is my spirit animal … and I’m not sure if that’s more of an insult to him or me? I actually think his character arc is the best, and his story was the one I was most eager to read. His arc was a wild ride, but by the time I got to the end, I was so excited for how it culminated. It was perfect!

- Sanderson isn’t a romance writer, but his romances are often my favorites, and this is no exception. You know why I love them so much? Because they’re healthy, even when they’re between two pretty messed up characters. And they don’t come easy. They’re earned, like all the best relationships. The relationships in this book (and of course there are some) are slow burns between two strong characters who complement each other.

- The world-building’s fabulous, the plots are intricate and well woven together, trust no one, yada, yada, yada, Sanderson. If you’ve read one Sanderson book, you should know pretty well what to expect by now. And if you haven’t … what’s wrong with you? No, off with you. Go to your room, and don’t come out until you’ve finished one. All the things that make Sanderson’s works great are present in this book … except for a sequel.
Meer lezen
12 mensen vonden dit nuttig
Vertaal recensie in het Nederlands

Music Lover
3,0 van 5 sterren Buyer beware
12 september 2018 - Gepubliceerd op Amazon.com
Geverifieerde aankoop
This is not a 600+ page book. 20% of the book is annotations on each chapter, essentially the author patting himself on the back for clever choices. While this may be interesting for a student of writing, it fails to compensate for the anti-climatic nature or simplistic consistency of this book. Pass by and grab a Bujold novel or Robin Hobb, or the Expanse series by GRRM’s personal assistant, or pick up Rothfuss or Phillip Charles Stephens or Altered Carbon. There’s better to be found.
Meer lezen
13 mensen vonden dit nuttig
Vertaal recensie in het Nederlands

The ending was fantastic and Brandon Sanderson better get working on that second book because I need it in my life now. He is quickly becoming my favorite author, and I’ve ordered more of his books because his writing and the worlds he creates are absolutely fantastic.