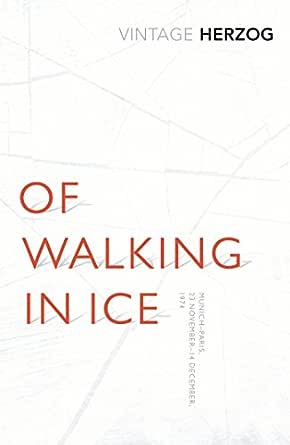 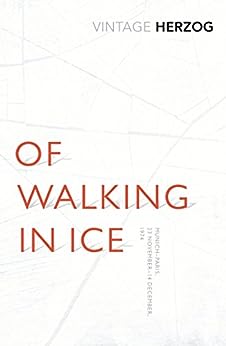 A poetic meditation on life and death, by one of the most renowned and respected film-makers and intellectuals of our time.

In November 1974, when Werner Herzog was told that his mentor Lotte Eisner, the film-maker and critic, was dying in Paris, he set off to walk there from Munich, ‘in full faith, believing that she would stay alive if I came on foot’. Along the way he recorded what he saw, how he felt, and what he experienced, from the physical discomfort of the journey to moments of rapture. It is a remarkable narrative – part pilgrimage, part meditation, and a confrontation between a great German Romantic imagination and the contemporary world. This edition of the book is being published for the first time as a classic piece of proto-psychogeography, to coincide with the fortieth anniversary of the legendary director’s walk.

John P. Jones III
3,0 van 5 sterren The marvelous polymath disappoints…
7 juli 2019 - Gepubliceerd op Amazon.com
Geverifieerde aankoop
I remain an immense fan of the movies of Werner Herzog. He is a director who wanders the world producing films, from Siberia to Alaska to Antarctica. There seems to be no limit to the subject matter that fascinates him, from what it would be like to be blind and deaf, to the Internet, to a medieval German village that loses the means of production to the delusions of a Spanish conquistador. In terms of movies, the only “clunker” that I’ve seen is his movie on the English woman who first made it to Hail, Saudi Arabia, and helped established two Middle Eastern countries (Jordan and Iraq): Gertrude Bell.

As additional incentives for wanting to read this work, I had to think of David Grossman’s “To the End of the Land.” In Grossman’s work an Israeli mother decides to walk the entire hiking trail from the top of Israel to the bottom, for in doing so she makes this “bargain with fate” that her son cannot be killed in the fighting in Lebanon if the military cannot reach her with the death notice. For Herzog, the “grande dame” of German cinema, Lotte Eisner, is dying in Paris. Herzog’s bargain with fate is that she cannot possibly die until he gets there, and so he goes by foot to postpone her death (she did not die until he got there). Walking across Europe has an intrinsic appeal to me. I’ve remained impressed with Patrick Leigh Fermor’s three volumes on his walk from Holland to Romania and Greece in the 1930’s. Herzog walked a much shorter segment, in the opposite direction to Fermor’s walk, four decades later. It took Herzog two weeks to walk from Munich to Paris, in a cold time of year (23 November to 14 December).

Ugh! For a man who provides so many thoughtful insights in his films, I felt there was a paucity of them in this trip… like he was just “going through the motions.” A deplorable aspect that I will always remember is that he seems to routinely break into vacant holiday homes for shelter in the evening! It is unclear if he is doing this due to a lack of money or simply “sport.” When he is near Paris, he grows concerned that “les flics,” (the police) are following him, and infers that it is unjust – just because he is walking. He also treats us to some delusional world views, even referencing Lon Nol’s palace.

Still, it is Herzog, and I am in full agreement with his philosophy: “Everyone should walk.” It is 1974, not long after the “beginning of European time for me.” He sees the Meuse River in the December haze, and experiences the large stream that is the Ill… of the famous restaurant of today… as well as the Vosges Mountains. He sees cranes, near Troyes, and as they flew over him in near perfect formation, he felt that they were metaphors for those who walk.

Herzog did the walk, and I still have not. For that, at least, 3-stars.

Matthew Snope
5,0 van 5 sterren Beautiful little memoir of a rather incredible feat of love and connection
21 juli 2017 - Gepubliceerd op Amazon.com
Geverifieerde aankoop
Beautiful little memoir. I drank 3 cups of coffee at Waffle House at midnight for some stupid reason and couldn't sleep, so read this in one sitting. Herzog keeps things moving narratively just like his journey; he also seamlessly weaves in dreams he has on the road, story ideas for Woyzeck, fantasies, etc. Not only is this a beautiful idea-- walking to someone who is dying to prolong their life -- but he's very self-deprecating when he arrives at Ms. Eisner's about the fact that he walked from Munich to Paris (he doesn't want her to know at first), in winter. His descriptiveness is beautiful; you feel reading this like you're along with him or playing some kind of hyper-real, textural video game, but in reality very few humans besides Herzog would have the nerve or stamina to do his 3-week walk in deepest winter across two countries. A Herzog classic. Even tho there's some unevenness to his prolific film output, I've always found his writings consistently worthwhile and impressive.
Meer lezen
2 mensen vonden dit nuttig
Vertaal recensie in het Nederlands

FourFold
5,0 van 5 sterren Beautiful world depicted.
2 januari 2020 - Gepubliceerd op Amazon.com
Geverifieerde aankoop
It’s a wonderful book. Of course, it’s a slog. Walking hundreds of miles across Europe in Winter? It’s boring, not fun, but Herzog did it, in a world before this crappy Internet. A world where isolation was still possible. I lived in Fiesole for six months in 1981. I contacted no one. It was the true feeling of
Being thrown into the world, in isolation, privacy.

All that is lost now. Now we can send real time photos, now we have the Euro. Along with global warming. This is a book that depicts a wonderful experience. Cold weather, isolation, effort: everything that has been lost, and for none of you younger people, a true world that has been loss to Terrorist Facebook and NAZI trump.
Meer lezen
Vertaal recensie in het Nederlands

Joe
5,0 van 5 sterren Herzog is a man who goes to extremes in his art and life in the best way.
13 november 2015 - Gepubliceerd op Amazon.com
Geverifieerde aankoop
Werner Herzog makes a commitment to himself to trek from Munich to Paris in the belief his dying mentor, Lotte Eisner, will remain alive as he journeys to her on foot. This journal powerfully captures the brutal weather and bitter cold. Herzog breaks into homes or buildings to make it through the nights. And at times, he appears to go mad as he chronicles his surrealistic thoughts.

This is 1974, and it gives you a sense how much the world has changed as we experience with him the roads, poverty, farms, streams, forests and disconnected towns and citizens that eye him warily. Herzog takes you on the odyssey emotionally, physically, and spiritually.

The other benefit of reading this book is it inspired me to watch several of his incredible films at the same time.

Herzog is a man who goes to extremes in his art and life in the best way.
Meer lezen
Vertaal recensie in het Nederlands

Nan N.
4,0 van 5 sterren A lyrical remembrance
6 juli 2015 - Gepubliceerd op Amazon.com
Geverifieerde aankoop
Not exactly what I expected, but very interesting read. I thought it would be more of a 'travelogue' type of book. Instead, it is lyrical, poetic, impressionistic. If you are familiar with Mr. Herzog's films, here he is on the page. Not such a surprise after all.
Meer lezen
2 mensen vonden dit nuttig
Vertaal recensie in het Nederlands
Ga naar Amazon.com om alle 16 recensies te bekijken 4,0 van 5 sterren
Terug naar boven
Over ons
Verkoop bij ons
We helpen je graag
© 1996-2020, Amazon.com, Inc. en dochterondernemingen