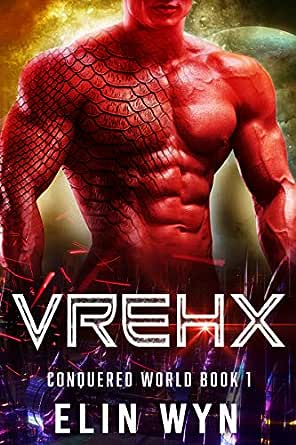 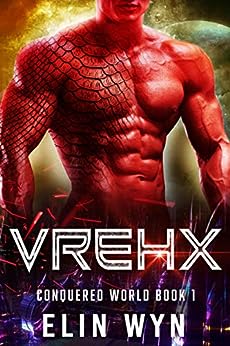 He shattered her world. Can she trust him with her heart?

Giant spiders, walking trees, bloodthirsty vines.
For Jeneva, it's just another day trying to survive in the jungles of Ankau.
Until the sky ripped open, and the true monsters came through.
Now her world is under attack, and the only place of safety may be at the side of a rock-hard scaled alien.
But he's filled with secrets - how can she trust him?

Vrehx cares for nothing other than the destruction of the Xathi hordes who burned his home and killed his family.
But when a weapons test goes horribly wrong, the battle spills over to an uncharted world.
The planet is filled with lethal native life...but nothing is more dangerous than the human woman who obsesses his thoughts.

When war rages around them, can they fight together, or will his burning need for her drive them apart?

Vrehx is the first book in the science fiction romance series Conquered World. Each book is a stand-alone romance with alpha male alien warriors and women who don't put up with their nonsense. No cheating, no cliffhangers, HEA guaranteed!

KMS
2,0 van 5 sterren Mostly Hated It
9 november 2018 - Gepubliceerd op Amazon.com
I didn’t mind the galaxy destroying bugs, the rip in space, or the different races of warriors on board the Vengeance.
The red scaled hero was just fine if one dimensional.

I hated (with the heat of a 1000 suns) every female character in the book. As minor characters, The screeching, immature sisters were infuriating. Am I supposed to believe that after growing up on this insane planet where trees attack and with giant spiders, that they just go blithely for a walk? And after their rescue, they’re still screeching “ You can’t keep me here!” Or my favorite, “I’ll tske my chances out there!” Add insult to injury, these twits are set up as the heroines for the next 2 books. Absolutely not.

Then there’s the heroine’s sister, Amira. She is a selfish brat who continually verbally attacks her sister. Pretty sure it’s not her fault that alien bug creatures have invaded your planet, but keep running your mouth.
Finally, the heroine, Jeneva. She discovers that the reason she can’t live in the city is that she’s an empath and can’t block the noise of civilization. She can survive in the wildness of this crazy planet, but she’s not afraid to go off half-cocked just like every other hormonal chick in this book. She runs her mouth and gets angry at her alien hot guy, and he just takes it.
Just No. Don’t bother.

Sherry Hoeye
2,0 van 5 sterren Kindle reader
9 januari 2019 - Gepubliceerd op Amazon.com
Geverifieerde aankoop
AARGHH, what a horrible heroine, I could not have cared less if tress, indigenous animals, alien's took her out. For a so supposedly empathic person, Jeneva had little empathy for anyone. She just has noise. She's too hung up on pitiful me complex, you know, everything is my fault. Stupid. Vrehx is just as bad but thinks she's the One. Don't know who is more dumb, the H/h or the author.

Emily Pennington
4,0 van 5 sterren Not a Place to Vacation !!
23 november 2018 - Gepubliceerd op Amazon.com
Geverifieerde aankoop
Jeneva heard two women screaming at each other. Because the dangerous foliage on the planet responded to noise, their shouting was not a good idea. She approached them and suggested they stop the argument, but they smugly replied that they carried a “howler”, a device beyond human hearing that would allegedly ward off any nasty things. Jeneva assured them that if the creatures could hear the howler, the women were indeed screwed. Instead of remaining silent, they started in again about whether the warning was true and how they would know. So Jeneva just walked away and left them to their fate.

Suddenly a horrible ear-splitting screech sounded, driving Jeneva to her knees. When she could get up again, she hurried back to the women to demand what they had done. But they were staring at the sky in terror as a jagged scar was torn across the blue sky and the entire forest erupted in chaos! One of the trees stepped forward, a lethal spider creature disappeared and reappeared close enough now to attack. The woman screamed and were useless in the fight. Jeneva shoved one out of the way of an attack, but didn’t clear herself fast enough and was injured. Surprisingly, as she prepared to fight with the spider again, a non-killing tree came forward and fell over on the spider to kill it. She would have to take them to shelter in a cave before the other two spiders, members of the pack of three, sought them out to kill them.

Back in space, part of the Xathi ship that had already slipped inside the rip was coming apart and disintegrating. Some of the Xathi crew were floating in space and then were shredded by the force of the rip that the Vengeance was quickly moving toward. No one knew what was happening. Sound ceased, horrible visual scenes happened around them, then sound suddenly returned. It was impossible to function or understand what was happening until they realized the Vengeance was crashing on an uncharged planet below them. The Xathi were also crashing and no one knew if their ship would be destroyed.

As Vrehx and his crew members tried to explore their crash site, one thing after another came at them! Beautiful deer surrounded them – and they saw the silver spikes protruding from their hooves as they suddenly attacked. Even a simple vine released creatures that spit acid at them. As they finally came into a clearing, they heard a strange howling noise. As they moved forward, they saw three women at the mouth of a cave and someone fired at them as if in warning. Would they retaliate and kill the women they assumed were just like the rest of the creatures on this planet? Or would they be able to communicate and perhaps even work together to survive?

For some reason, the characters in this book were not managed as well as I could have hoped. The female characters were downright annoying because they should have been strong and capable with the experience of living on this deadly planet. Yet they were acting out and whiny at times to the point I wanted to skip over that section of the book. However, the action and world-building was really good. I felt drawn into the story line and dragged along, kicking and screaming and afraid to look over my shoulder sometimes! The constant action and suspense won me over and I will definitely read the next book in this series.

The first thing I want to point out is the world created for this story. It's amazing and so vivid. From the trees to the creatures, it's beautiful and horrific all wrapped up in one. I really loved how courageous Jeneva was. Vrehx was a perfect match for her and he was the definition of a strong and sexy protector. This sci-fi book came with plenty of excitement, danger, humor, and romance and kept me guessing most of the way through. I was definitely not disappointed and would recommend it.
Meer lezen
4 mensen vonden dit nuttig
Vertaal recensie in het Nederlands

Kelly Rubidoux
5,0 van 5 sterren A Reading the Paranormal Review
10 januari 2020 - Gepubliceerd op Amazon.com
Geverifieerde aankoop
No lie, guys, this book was EXACTLY what I was in the mood for when I picked it up. A dangerous world that just seems to get more dangerous the longer you're in it. SUPER terrible bad guys who know nothing beyond the desire to conquer and destroy. A group of (mostly) good aliens who accidentally brought this awful plague of hive-aliens to this planet and now have to figure out how to contain them. A tough-as-nails heroine who butts heads with a (sometimes) overbearing hero. Danger! Chaos! Berserker rages!

This book is absolutely up my alley. Jeneva and Vrehx snarl and growl at each other enough to make me grin. Jeneva doesn't have time for idiots and Vrehx's main mission is stopping the Xathi before they have to chance to annihilate another planet/people. He's single-minded and focused and Jeneva throws him all out of whack. In THE BEST way.

As for Jeneva, Vrehx's appearance on her planet it a shock, but he does bring her answers to questions she didn't know she needed to ask. She's smart enough to realize the aliens on Vrehx's ship might not know the dangers of her planet, but they're her people's only hope for survival against the Xathi horde.

A whole lot of danger (both from the planet and the invading aliens), plenty of lingering looks, a few bloody battles, and the set-up for what looks like it's going to be an epic series. I am so in.