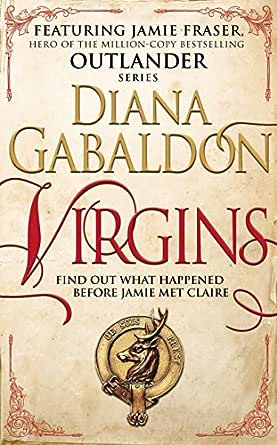 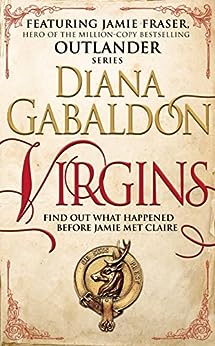 FIND OUT WHAT HAPPENED BEFORE JAMIE MET CLAIRE IN THIS BRILLIANT NEW OUTLANDER SHORT STORY.

1740: Young Jamie Fraser has left Scotland and, with his best friend Ian Murray, is running with a band of mercenaries in France.

Both men have good reason not to go back to their homeland: both are nursing wounds, and despite their best efforts to remedy the situation, both are still virgins.

So when a Jewish doctor hires them to escort his granddaughter to Paris, they readily agree. Both men are instantly drawn to the beautiful young lady.

What neither know is that their lives and their friendships are about to become infinitely more complicated - and a lot more dangerous ...

A young Jamie Fraser learns what it really means to become a man in this }Outlander{ prequel novella. Featuring all the trademark suspense, adventure and history of Diana Gabaldon's international bestselling novels, for the first time }Virgins{ is now available as a standalone book
Alle bekijken

MommaMia
5,0 van 5 sterren Hold on to your kilt!
8 april 2016 - Gepubliceerd op Amazon.com
Indeling: Kindle-editieGeverifieerde aankoop
Diana Gabaldon consistently delivers for her fans. This novella, Virgins, is yet another mini installment in the "behind the story" story that she presents to us in an attempt to give us a glimpse into events that were spoken of but never really explored fully in her book series. Everyone that loves Outlander and her other books LOVES Jamie Fraser and can't get enough of these mini stories to keep us going between books. This is definitely NOT a stand alone story and you wouldn't have a clue as to what was going on if you didn't read the Outlander series, or at the very least, the first book itself.

Ian and Jamie are young in this story, Jamie just having escaped from confinement in an English prison. He has just encountered his nemesis, Black Jack, for the first time and is lucky to be alive. Ian is traveling with a band of mercenaries and Jamie hopes to join them in the hopes of staying clear of Scotland and staying close to the one man he trusts like a brother. What I liked about this is that Jamie is very young here and we have had little exposure to him at that age. He is a naïve boy who has just suffered extreme punishment and lost his father and homeland quite suddenly. He's trying to fit in among these seasoned men in France and he is just learning the ropes. I almost feel like a fly on the wall! That is where our story begins, and I doubt you will be disappointed. Hold on to your kilt!

It took me about 3 hours this morning to finish, in between a few phone calls and laundry. It's a great prelude to the second season of Outlander beginning on STARZ tomorrow! Now I REALLY can't wait!

Orianna
4,0 van 5 sterren Another Outlander Novella
23 mei 2016 - Gepubliceerd op Amazon.com
Indeling: Kindle-editieGeverifieerde aankoop
Outlander is a series of novels that follow the lives of Claire, a WWII combat nurse who travels back in time to the 1740s, and her second husband, James Fraser, a Scottish laird. These books can't really be classified by genre, since they include history, drama, adventure, romance, mystery, sci-fi/fantasy . . . a little of everything, really.

For those who are desperate for a Jamie and Claire fix, this should help ease the withdrawal pangs until the next (ninth) book comes out. Like some of the other short stories Diana Gabaldon has written, it fills in one of the gaps in the main characters' lives, exploring a period that we knew little about. It's longer than your typical short story, but nowhere near novel-length---especially a Diana Gabaldon novel! It's called a novella, which is either a very short novel or a very long short story. Either way, it doesn't take long to read.

The story takes place shortly after Jamie escapes from Fort William, after being flogged (twice) by Black Jack Randall. Forced to flee Scotland because of the price on his head, Jamie goes to France, where he joins his best friend Ian as a mercenary-for-hire. After proving their worth as braw fighters, they're asked to escort a young Jewish bride and her priceless dowry to her husband-to-be in another part of the country, but as always, where James Alexander Malcolm Mackenzie Fraser goes, trouble always follows.

For those familiar with the Outlander series, you probably won't be surprised to learn that there is a rather graphic rape scene in this story. Every one of the books contains at least one sexual assault, and this short story is no exception. Interestingly, the scene in question is one that's mentioned in "Outlander" by Jamie on his wedding night to Claire. It's a throwaway line, something he says in passing, but the author clearly remembered and decided to expand upon it. It helps tie this story to the main series. Not that I couldn't have lived without the rape scene, but if it has to be there, at least it's connected. And it has an impact on the characters, so t's not gratuitous; it has a purpose, which makes it easier to bear.

The only real flaw in this story is that Claire is missing. But since it takes place long before Jamie meets her, it's forgivable. Four stars and recommended to anyone who loves the Outlander series.
Meer lezen
50 mensen vonden dit nuttig
Vertaal recensie in het Nederlands

Tabby1249
5,0 van 5 sterren Wonderful backstory...
23 april 2016 - Gepubliceerd op Amazon.com
Indeling: Kindle-editieGeverifieerde aankoop
I was a late-comer to the Outlander series having not read the first novel, 'Outlander,' until mid-2014. Once started however, I read the existing books in the series in rapid succession and then waited breathlessly for 'Written in My Own Heart's Blood.' I wish I could say that each successive book was as perfect as 'Outlander,' but that is not the case. I still enjoyed each reading experience, but not as much as my 'first time.' Which brings me now to 'Virgins,' a novella of Jamie and Ian as mercenaries.

'Virgins' reminds me of why I fell in love with Jamie and the whole Outlander universe. From the opening scene to the last word, the reader is treated to Jamie's courage, strength and heart, all firmly in place and well developed pre-Claire. Diana Gabaldon lets us inside Jamie's deep mourning and wracking guilt over the death of his father as well as his on-going worry over his sister, Jenny, in the wake of Black Jack Randall's mayhem. We see Ian as a whole, strong man as well as the dynamic of his relationship to Jamie in a way we've never seen it before. What 'Virgins' does is that it gives us another dimension to both characters that makes them, if possible, even more compelling.