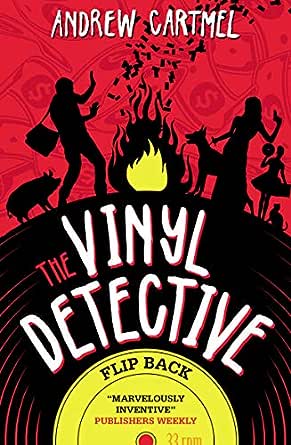 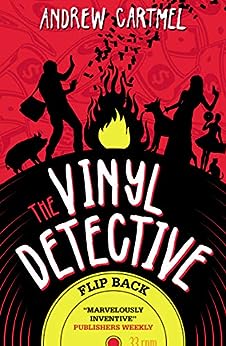 The fourth book in the hilarious and enthralling Vinyl Detective mystery series. “Like an old 45rpm record, this book crackles with brilliance.” David Quantick on Written in Dead Wax

At the height of their success, the electric folk band Black Dog invited journalists to a desolate island for an infamous publicity stunt: the burning of a million dollars. But the stunt backfired and the band split up, increasing the value of their final album vastly. It’s this album that Tinkler’s got his eye on, and he hires none other than the Vinyl Detective and Nevada to hunt a copy down.

Narrowly avoiding a killing spree, negotiating deranged Black Dog fans, and being pursued by hack celebrity Stinky Stamner and his camera crew, the Vinyl Detective and Nevada discover that perhaps all was not as it seemed on the island—and that in the embers of that fire are clues to a motive for murder…

Miss Parker
5,0 van 5 sterren Another delightful adventure with the Vinyl Detective and friends
20 mei 2019 - Gepubliceerd op Amazon.com
Geverifieerde aankoop
Another delightful adventure with the Vinyl Detective and friends. It was a fast, engaging read - this time centering around the search for an extremely rare copy of the last album by a long-broken up folk band. Hijinks, mortal danger, and the drinking of some very good wine ensue. I'm looking forward to both rereading this one and to the next adventure. The Vinyl Detective has searched for jazz, rock, big band swing, and now folk- what musical genre will the next search involve? I'm hoping for 80s New Wave or possibly 70s punk. Whatever it ends up being, I will be here for it.
Meer lezen
Een iemand vond dit nuttig
Vertaal recensie in het Nederlands

Michelle44
5,0 van 5 sterren Excellent
13 augustus 2019 - Gepubliceerd op Amazon.com
Geverifieerde aankoop
Listened to this on Audible, the narrator is excellent. The story itself was a true ride and I HATED when it was over! The appearance of Stinky Stamner is always comical to me and I LOL'd quite a bit. I will be listening to this again (as I have all the others) and trying to wait patiently for the next adventure of the Vinyl Detective, Nevada and the rest of the crew!
Meer lezen
Vertaal recensie in het Nederlands

Kindle Customer
4,0 van 5 sterren Enjoyed it
3 juni 2019 - Gepubliceerd op Amazon.com
Geverifieerde aankoop
I've become a fan of this series and this latest didn't disappoint. Cartmel's got a formula but it's an enjoyable one. Characters, cats, cuisine and music - what could be better. Oh, and lots of murders.
Meer lezen
Vertaal recensie in het Nederlands

Benjamin F Pascoe
4,0 van 5 sterren Enjoyable, I didn't want it to end.
27 mei 2019 - Gepubliceerd op Amazon.com
Geverifieerde aankoop
The beginning is a bit meandering, and the end is abrupt, but I realised I didn't want to be finished with the book when I got to the last page, so that's a pretty good sign.
Meer lezen
Vertaal recensie in het Nederlands