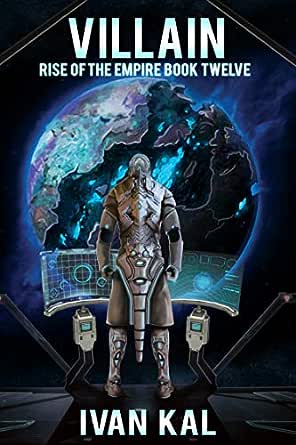 The final book in the Rise of the Empire saga!

The stage is set, and the battle for the fate of the galaxy is about to begin. Adrian and Anessa, their daughter Ryaana, and Lurker of the Depths prepare for the final fight against the Enlightened.

Meanwhile, Emperor Tomas Klein gathers a great alliance from races across the galaxy, building another Great Fleet. His intention is to fight the Enlightened, but his plan might not be the same as Adrian’s.

The final battle has begun!

Villain is book 12 in the Rise of the Empire series, an epic story that follows humanity as it grows from a single world to ultimately becoming a galaxy wide empire.

This book series is part of KalVerse. All of my books take place inside a shared multiverse, and some characters crossover from series to series. But it is not required for you to read all the series in order to understand what is happening, each series has its own set of characters and a storyline which is contained inside of that series.

Ed Lyons
5,0 van 5 sterren Loved it;
29 november 2019 - Gepubliceerd op Amazon.com
Geverifieerde aankoop
Very entertaining. I am happy that we were not left with a cliffhanger....and yet, some of the characters will continue. Thank you Mr. Kal.
Meer lezen
Vertaal recensie in het Nederlands

Brian Puzzo
5,0 van 5 sterren Best Book, could not put it down
10 december 2019 - Gepubliceerd op Amazon.com
Having loved all the books in each series, Villian (Rise of the Empire Book 12), was the very best. I could not put it down and wished that there was more to read, geting pulled deeper and deeper into the story.
I am so glad the author has another series coming out next year.

Avid Reader
5,0 van 5 sterren Excellent
18 januari 2020 - Gepubliceerd op Amazon.com
It’s rare to find an author with this extensive a library in which I’ve loved everything. What makes me sad is that I now have to wait for further installments of this multiverse as I’ve read everything written to date.
Meer lezen
Vertaal recensie in het Nederlands

Kindle Customer
5,0 van 5 sterren Best series I have read since Ender's Game. Had me hooked from page one of book one until now. Would read any of Ivan's books without hesitation!
30 november 2019 - Gepubliceerd op Amazon.com
Anazing series and wonderful last book. Bummed it wasn't out sooner as I was jumping to read the last part... Ivan's books are all must read and I can honestly say that regardless of accuracy his books are the most entertaining I've ever read. Will continue reading every book he puts out
Meer lezen
Een iemand vond dit nuttig
Vertaal recensie in het Nederlands