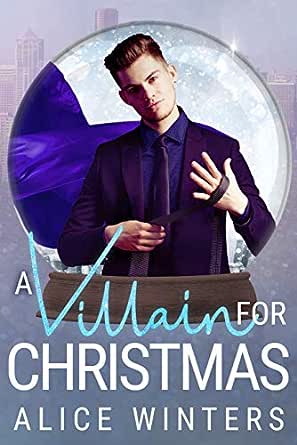 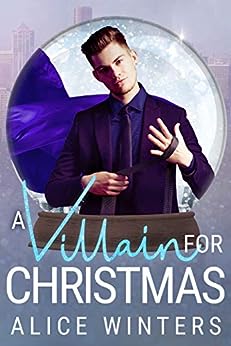 Despite growing up in a family of villains, I’d rather curl up and read than commit crimes. When I get coerced by my brother into helping him rob a bank, I run into August, my childhood crush—also known as Chrono, the city’s greatest superhero. He’s sexy, sweet, and suddenly he’s asking me to Thanksgiving with his parents. It’s probably because he doesn’t realize that I’m Leviathan, a villain with the power of telekinesis. And I can’t tell him because he’d never forgive me and would stop doing things like cooking for me—wait, maybe that would be a good thing, since he’s a terrible cook. It doesn’t help that my parents think they’re the ultimate villains and won’t stop getting in my way, although they can’t even steal toilet paper without getting caught.

But when real supervillains (not the wannabe kind that I grew up with) start targeting August, I might be forced to show everyone who I truly am: a slightly warped and snarky man who’d really rather read a book than save anything… besides August. I’ll tear this world apart just to get another glimpse of him in those glasses and spandex suit. I’ll do whatever it takes to keep him safe, even though it means exposing my true identity. Luckily, August still cares about me, proving that even a villain and a hero can fall in love. Hopefully, we’ll be able to save the world in time for Christmas.

This ridiculous and snarky holiday novel is 92,000 words and contains a villain turned unlikely hero (even if he’s a manager's worst nightmare), a superhero with a fondness for suckers who absolutely does NOT use his powers to cheat on board games, a hairless cat with an unfortunate name, bumbling family members that try to be evil but are mostly just embarrassing, a snow globe with mysterious powers, betrayal, true love, a risqué Santa suit, and the saltiest chicken ever.

Although this book is part of A Snow Globe Christmas series, it is a complete standalone, and it isn’t a requirement that you read the previous books to follow along. We wish everyone a happy holiday season.
click to open popover

Alice Winters was a new to me author this year, when I finally got around to listening to her In Darkness series. I still have quite a few books of hers to catch up on, but I think it’s safe to say, she’s become one of my favorites. A Villain For Christmas just solidified it for me. I swear she’s the Helena Hunting of the male/male genre. I’m not sure if all of her books are as laugh out loud funny as the ones I’ve read so far, but even if they aren’t I’m pretty sure I’ll love them regardless.

A Villain for Christmas had me laughing from the start, but had me wiping tears at the end. What a funny, wacky, over-the-top story this was! The banter, the snark, the downright silliness of some of the situations Landon and August found themselves in kept me completely entertained. But there were also some slightly heavier, more serious undertones to the story, which Ms. Winters always balances so well with her humor. Thus the tears at the end.

After finishing A Villain for Christmas, I’m not sure who I love more- Landon, Felix (In Darkness series), or Leland (Hitman’s series). What I do know for sure- I need more! I really hope Ms. Winters will continue this series- I'd happily read about these SuperHeroes and SuperVillains for as long as she's willing to write them!

Phyllida Ludd
5,0 van 5 sterren Funny and snarky
25 november 2019 - Gepubliceerd op Amazon.com
Geverifieerde aankoop
This story has a dash of superhero, a dash of supervillain, a dash of secret mutual crushes, and a dash of insanity. Landon, who has the power of telekinesis, comes from a family of wanna-be villains and has had a long-term crush on August. August, a superhero, feels the same, though he doesn't realize that Landon is also known as the supervillain Leviathan. Cue flirting, zany antics, and miscellaneous hijinks.

The book is as well-written and funny as any Alice Winters book, but it has a lot of characters with a lot going on, and I think the main love story gets a little lost in the shuffle. If you like movies like Clue and Oscar (with Tim Curry) or books like Lucy Lennox's LOL, you'll probably love this book. If you like something a little more sweet and sedate with a laser focus on the main characters' relationship, this may not be for you. You'll never know unless you give it a chance!
Meer lezen
Een iemand vond dit nuttig
Vertaal recensie in het Nederlands

padme35
5,0 van 5 sterren Fun and different Xmas story
31 januari 2020 - Gepubliceerd op Amazon.com
Geverifieerde aankoop
There is just not enough superhero/supervillain(or in the case of Landon's family not-so-super-supervillians) stories in the LGBT genres. A Villain for Christmas was the first book of 2020 for me and what a way to kick off the year!

This is another one of those stories that I'm not going to say too much about because you really do need to experience Landon and August's journey to fully appreciate the magnificence that is Alice Walker's storytelling. There is so much goodness in this story and the genuine-ness of the characters, whether they fall on the good or bad side of the scale, is what makes them stand out. You'll have moments of shaking your head and saying "WTF is wrong with that person?" and you'll have equal moments of "OMG how can one person be so understanding?" It's these emotions that make this story so hard to put down.

This is only the second Alice Winters book I've read and it definitely cemented my desire to read more of her backlist this year. She has a way with what I like to call "snark and cuddle" that make her characters not only fun(even if you want to shake them or smack them upside the head with a kitchen appliance) but that much more real, which isn't easy to do in the fantasy world of superheros and villains. Being a holiday setting only makes the magic of the story that much sweeter. Definitely a win win for both my holiday and superhero shelf.
Meer lezen
Vertaal recensie in het Nederlands

Dr. G---Constant Reader
5,0 van 5 sterren Great banter, great cat, great humor---read it!
26 november 2019 - Gepubliceerd op Amazon.com
Geverifieerde aankoop
Something I've been loving about the Snow Globe Christmas multi-author series is that each book is actually a book. I've had to put several of my favorite authors on hold because, over the years, their books have gone from short novels to novellas (60 to 80 pages) with no change in price. Not only is it not economical, the books are over too quickly! Alice Winters' books are all actual books, so much so that when I check to see how much I have left (when it feels like a regular modern ebook would be done), I'm excited to discover I'm around the 40% mark and have over half of the book left. This allows Winters (and the other authors in this series thus far) to have a more intricate story arc that reaches beyond "love-conflict-resolution," which is excellent. As for this work in particular: it's funny, well-written, and has a great flow into the issues of a world where villains, supers, and wannabes exist.
Meer lezen
Vertaal recensie in het Nederlands

Lorraine
4,0 van 5 sterren A well thought out plot
13 december 2019 - Gepubliceerd op Amazon.com
Geverifieerde aankoop
A romance between a sort of goodie super hero and a (sort of) baddie super villain. Supers in this story dont have the usual bunch of super powers. It could be just telekinesis, or strength, or mind-reading, or being able to short electricity, etc. In this world, most so-called super powers are a bit blah. All the characters are well -drawn.
The story did tend to droop a fraction in the middle but righted itself. Easy-flowing dialogue.
Our main baddie super villain doesn't want to be a baddie, much to the chagrin of his delightful family and they can only be described as gleeful wannabe baddies who might create a smidgen of chaos when out on a crime spree.
Meer lezen
Vertaal recensie in het Nederlands
Ga naar Amazon.com om alle 100 recensies te bekijken 4,8 van 5 sterren
Terug naar boven
Over ons
Verkoop bij ons
We helpen je graag
© 1996-2020, Amazon.com, Inc. en dochterondernemingen