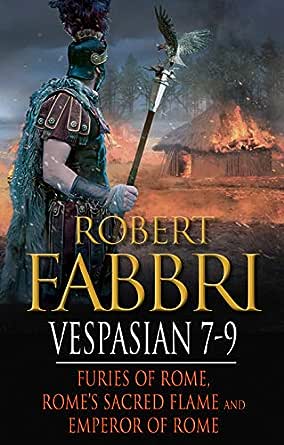 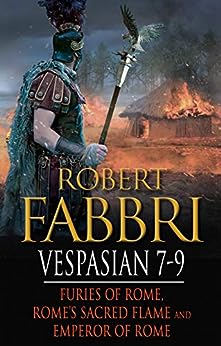 BOOKS 7-9 IN THE VESPASIAN SERIES


Furies of Rome
AD 58: Rome is in turmoil once more. Emperor Nero has set his heart on a new wife but to clear a path for her, he must first assassinate his Empress, Claudia Octavia. Vespasian needs to tread carefully here - Nero's new lover, Poppaea Sabina, is no friend of his and her ascent to power spells danger.

Meanwhile, Nero's extravagance has reached new heights, triggering a growing financial crisis in Britannia. Vespasian is sent to Londinium to rescue the situation, only to become embroiled in a deadly rebellion, one that threatens to destroy Britannia and de-stabilise the empire...


Rome's Sacred Flame
AD 63: Vespasian has been ordered to a far-flung empire in Africa to free five hundred Roman citizens who have been enslaved by a desert kingdom. But when Vespasian reaches the city, he discovers tensions spilling over into bloody chaos...

Battling thirst and exhaustion, Vespasian must help the Romans escape, their only route to survival a desperate race across a barren desert with a hoard of heavily armed rebels at their backs. Meanwhile, back in Rome, its citizens fear for their lives as Emperor Nero's extravagance and unpredictable violence goes unchecked. Can anyone stop the Emperor before Rome devours itself? And if Nero is to be toppled, who will be the one to put his head in the lion's mouth?


Emperor of Rome
AD 68. Vespasian is tasked with the impossible. Should he quell the revolt in Judaea, as Nero the emperor has instructed, or resort to the unthinkable and sabotage his own campaign? If his conquest succeeds, he risks facing the mad emperor's jealousy. If he fails, his punishment will be severe.