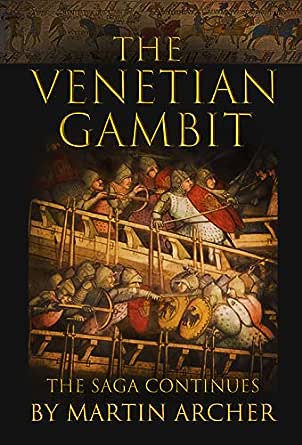 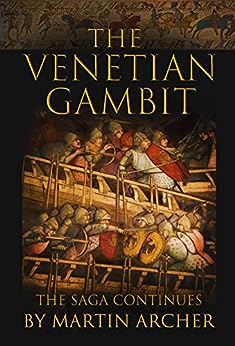 The Venetian Gambit: The Saga Continues (The Company of Archers) (English Edition) Kindle-editie

Arrows fly, swords clash, nobles and churchmen are gulled out of their coins, and the French and Venetians are successfully blamed for things they did not do. The Venetian Gambit is another story in Martin Archer’s great action-packed saga about Cornwall’s Company of Archers, a free company that began operating armed transports and shipping posts at the dawn of Britain’s military supremacy and the beginning of its great merchant companies. It is an enjoyable and sometimes witty read that sticks pins into the Church and nobility along the way.

It is the year 1219. George Courtenay and the Company of Archers have just served as mercenaries and helped the Latin Empire based in Constantinople defeat the invading Greeks and Venetians. The surviving archers have been paid handsomely for their services by the Latin Empress. But the wants of man are insatiable and the compact of the Company on which all the archers made their marks requires them to revenge their casualties. That is all the justification the archers need to tell whatever lies and take whatever actions are necessary to relieve the Venetians of some of their coins - and while doing so, hopefully, see that the Venetian losses are blamed on the French.

The on-going saga of Cornwall’s The Company of Archers is set in dangerous and gritty medieval England during a time of great upheaval throughout Britain—with dissident barons periodically rising against their kings, the Saracens lashing out against the Christians in the Holy Land for breaking the truce by starting another crusade, and the Moorish pirates from the city states of the Barbary Coast fighting with each other and everyone else for control of the Mediterranean.

This is British and English historical fiction at its action-packed best. It will appeal to readers who enjoy books such as George R. R. Martin’s The Game of Thrones, George MacDonald Fraser’s Flashman, and authors such as Bernard Cornwell, Dan Brown, Jeffrey Archer, C.S. Forester, Griff Hosker, Peter Darman, and Jerry Auteri. The author’s books in the saga can be found by searching Amazon, Google, Goodreads, or Bing for "Martin Archer stories."

AGB
5,0 van 5 sterren Great Series!
26 januari 2020 - Gepubliceerd op Amazon.com
Geverifieerde aankoop
I have read all of the Archer series as soon as they have become available. Very entertaining! I have enjoyed following the adventures of the Company of Archers in old England and all around the Mediterranean outwittng and out-fighting each new adversary. Written in an unusual and entertaining style as the stories are told by the central characters as well as by minor characters from different perspectives.
Start at the beginning and read them in order.

Kindle Customer
5,0 van 5 sterren Great
11 januari 2020 - Gepubliceerd op Amazon.com
Great continuation of this series. A truly enjoyable read as we follow this company of archers on their adventures. Eagerly awaiting the next book.
Meer lezen
Vertaal recensie in het Nederlands