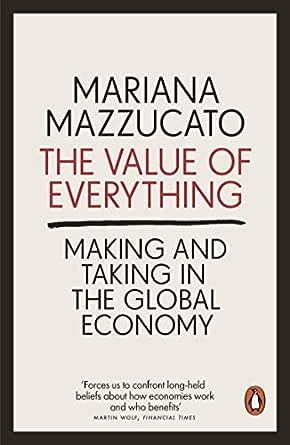 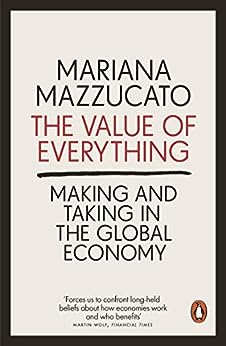 The Value of Everything: Making and Taking in the Global Economy (English Edition) Kindle-editie

Who really creates wealth in our world? And how do we decide the value of what they do? At the heart of today's financial and economic crisis is a problem hiding in plain sight. In modern capitalism, value-extraction - the siphoning off of profits, from shareholders' dividends to bankers' bonuses - is rewarded more highly than value-creation: the productive process that drives a healthy economy and society. We misidentify takers as makers, and have lost sight of what value really means. Once a central plank of economic thought, this concept of value - what it is, why it matters to us - is simply no longer discussed.

Yet, argues Mariana Mazzucato in this penetrating and passionate new book, if we are to reform capitalism - to radically transform an increasingly sick system rather than continue feeding it - we urgently need to rethink where wealth comes from. Who is creating it, who is extracting it, and who is destroying it? Answers to these questions are key if we want to replace the current parasitic system with a type of capitalism that is more sustainable, more symbiotic: that works for us all. The Value of Everything will reignite a long-needed debate about the kind of world we really want to live in.

Hande Z
5,0 van 5 sterren Value is remembered long after price is forgotten
7 juli 2018 - Gepubliceerd op Amazon.com
Geverifieerde aankoop
Mazzucato has written a timely book in an age in which economists and the public alike seem too often to confuse wealth with value. We once understood price as a reasonable gauge for value, but not anymore. In modern capitalism and globalisation, value can be faked. As a result, we often do not see the difference between people and things that create value and those that extract value. What do financial people do when they move assets from one place to another? Are they creating value or just extracting value? In classical economics, ‘value’ is the result of productive activities. In earlier versions of economic thought, we have Adam Smith’s theory of value based on the productivity of labour. In modern times, there are sectors that do not produce anything except moving existing assets around instead of creating new assets. It is now assumed that anything that has a price has value. How do we verify the claims by large financial institutions that their employees are the most productive in the world? How do we value their productivity when no new assets had been created by them? The conflation between productivity and value is the illusion Mazzucato seeks to dispel in this book.

Mazzucato is in no doubt that the financial sector extracts value, and she discusses how it does this. In the chapter, ‘The Rise of Casino Capitalism’, she explains how extraction is done by the insertion of a wedge, namely, a ‘transaction cost’ between the providers and the receivers of finance. They also achieved through monopoly power, and lastly, through high charges relative to risks run, especially in fund management.

In the case of economic downturns, what should be done? Should the government intervene, and if so, in small parts or in major moves? Or should the government keep out and leave it entirely to market forces? The author seems to support the Keynesian method of controlled intervention. Some economists argue otherwise, but Mazzucato’s arguments in the chapter, ‘Undervaluing the Public Sector’ is persuasive. Mazzucato examines the current history of economic activities and the impact of technology. In understanding the idea of value, we can better understand the distribution of income among different sectors of society. It is a fascinating book that is a joy to read because it covers economics, including its technical and historical aspects, lucidly for the layman. It takes us through the history of economics and the way ‘value’ had been defined and used, to the rise of the financial colossuses, and how they changed the idea of value and the impact that has made. She discusses the difference between creating value and extracting value, and the role of the government in stabilising the economy when takers (those who extract value) disrupt the economy create false value against the real value of the makers (people who produce value).

Mazzucato invites us to determine what sort of economy do we want? In so doing, she explains what markets are and how they can shape the economy – so that we can shape the markets. Technology propels us so rapidly that in the end, we may have reached the end – unless we take control and create an economy that is sustainable not just for markets, not just for takers, not just for ourselves, but for the planet.

J. Edgar Mihelic, MBA
5,0 van 5 sterren Economics from the Ground Up
11 augustus 2018 - Gepubliceerd op Amazon.com
Geverifieerde aankoop
Mazzucato is one of the most interesting economists working today. I say this because her project in the last two books focus on a ground-up redetermination of what is important in the economy. To someone like me, who is interested in the social generation and distribution of resources but who think that policy makers went the wrong way in recent years (especially before 2008, see Bernanke to Friedman: “Let me end my talk by abusing slightly my status as an official representative of the Federal Reserve. I would like to say to Milton and Anna: Regarding the Great Depression. You're right, we did it. We're very sorry. But thanks to you, we won't do it again. “) this book is just catnip. So much catnip that I stayed up too late a couple of nights in a row reading it.

Mazzucato, in this book, looks at where value was theoretically derived historically from the physiocrats to Smith through Marx and into the marginal revolution. She focuses the critique on the marginalists and the composition of current GDP about how it focus to much on the market – how what has a price has value and nothing else. For Mazzucato, this sidelines non-market institutions like the government which are long-term value creators but left out of market considerations because what they do doesn’t have a price. It is a compelling argument to look at how we analyze “the economy” in a different light.
Meer lezen
29 mensen vonden dit nuttig
Vertaal recensie in het Nederlands

Jesper Doepping
5,0 van 5 sterren Easy read with a strong argument for re-instating value as a key concern
20 juni 2018 - Gepubliceerd op Amazon.com
Geverifieerde aankoop
I bought this book because I read the entrepreneurial state. This book in my opinion in a very easy to understand way for non-economists argues that we have to return to a much more basic question - the question of value creation, what is it and what is it not?

The book starts with a theory historical perspective that are incredible easy to understand on how value have been conceptualized. This theory perspective gives a clear guideline to the different perspectives and the development towards a subjective understanding of value and what problems that rises. In particular the consistent discussion of rent seeking or value extraction is important - even though it might for some readers at first glance will be seen as a finance and neoliberal ideology bashing, it works by closer consideration as a tool to positive start a discussion of what value creation really means.

By going this way the author succeed in forcing us to reconsider our everyday concepts of the state, and in particular its role in creating long term value and prosperity. Inevitable it comes to question and ask questions of how to define and understand the value of the common good, growth, innovation and entrepreneurship.

From a more organizational and sociological perspective she forces us to consider how we run private business, how we extract value from the business both in terms of distribution (top versus other stakeholders). It forces anyone working in business to think if we are just rent-seekers or we actually create some value for all stakeholders.