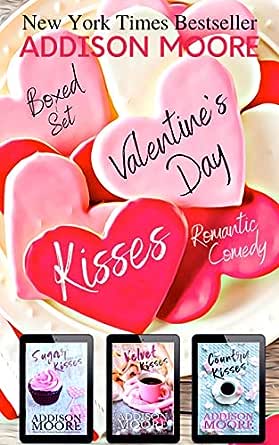 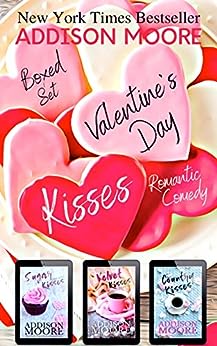 Three fabulous romantic comedies all set around Valentine’s Day. Cozy up to these swoon worthy romances that are sure to give you all the warm fuzzies you’ll need to keep yourself heated on a cold winter’s night. This boxed set includes: Three romantic comedies filled with winter hijinks and lots of love. Happy reading!


Sugar Kisses (3:Am Kisses)
Roxy and Cole have off the chart chemistry but as new roommates they just can't get along. There will either be a good time or a homicide on the horizon. Roxy is rooting for both.

Roxy Capwell couldn’t be more miserable. She just had her heart stomped on by her cheating boyfriend, and the last thing she’s looking for is love. She hates men. Cole Brighton couldn’t be happier. He’s a player of the highest order, there’s not a girl at Whitney Briggs University that he can’t tag and bag. He loves the ladies.

Roxy’s dream is to own and operate her own bakery one day, but with no oven in her dorm, and a lucrative baking competition on the horizon, she agrees to move in with her best friend’s brother, the obnoxious, womanizing, Cole Brighton.

Between the heavenly scent of baked goods, and Roxy’s perfect body strutting around the apartment, Cole can’t think straight. So when Roxy’s ex starts sniffing around again, Cole volunteers to play the part of her new boy-toy and things get heated both in and out of the kitchen.

Roxy discovers she might not hate every man on the planet, and Cole discovers nothing tastes better than Roxy and her late night SUGAR KISSES.

Marley Jackson has an axe to grind with the entire male population. After having her heart brutally broken, she’s out to prove to herself, and the world, that a woman only needs one thing from a man—and it isn’t love.

Wyatt James isn’t interested in anything that resembles a commitment. He’s self-made, secure, and happy to entertain a one-night stand any day of the week—enter Marley. Marley quickly dispels the idea that she’s anybody’s one-night stand. What Marley has in store for Wyatt is far more complex and requires a binding contract to back it. Marley and Wyatt aren’t in it for love.

Marley is looking to glean some expertise in the bedroom. Wyatt is looking to find some solace after a string of nameless faces that have rocked his bed. But when feelings change, and that four-letter word takes ahold of both their hearts, they’re left to face the fact they might be in deeper than either of them thought possible.

Country Kisses (3:AM Kisses)
I fell hard for Cade the moment I met up with those bedroom eyes of his, but it's not my heart I'm interested in gifting him.

Cade James is my best friend's brother, well-bred and well bed. To him I'm just another plaything, but I can't blame him for that. I'm not much to look at, and there's not a man on the planet that would be willing to make me his own.

But Cade is pulling me deeper, asking questions, wanting to know what makes me tick--wanting to know who gave me the scar that takes up the landscape over half my face. Cade wants far more than what I'm willing to give him.

If I let him in, let him into the most sacred chamber of my heart, I might end up with a wound far greater than the one that left that scar.
The wound Cade James has the power to inflict could never heal.

Shay
5,0 van 5 sterren Sugar, Velvet, and Country Kisses
13 januari 2020 - Gepubliceerd op Amazon.com
Geverifieerde aankoop
Sugar Kisses is one of my #1 faves in this series because Roxie is the biggest spitfire you’ll ever meet! She’s vicious and she’s ready to bake delicious treats at her hearts content! And she’s totally not gonna fall for her brother’s best friends tricks. Or will she? Is Roxie going to risk all she knows about men just for Cole? Read and see!

Velvet Kisses is awesome. Marley is LOL kind of funny and a particular scene has always stuck with me and I have read the book twice and the second time it is even funnier. Let’s just say there’s a small fire involved and... it’s just hilarious. Trust me. This is a steamy number you won’t want to miss!

Country Kisses. Oh my. This one hits home as I’m a country bumpkin myself living in the rural south. But Cassidy is more than a thick country twang, she’s a hurting girl but that doesn’t stop her. And it doesn’t stop Cade himself from sniffing around either. Watching Cade break a little for Cassidy and showing a side we haven’t seen was a sweet treat. Steamy and dreamy are perfect words to describe this sinfully sweet book!

sugar kisses - the h moves in with her bestie's brother. She bakes cupcakes and needs an oven. The H has an oven in his apartment. The H is known as the king of one night stands on campus and has a large group of "I slept with Cole" women. The h is getting over her cheating boyfriend. The two try to fight their attraction to each other but fall for each other. There are some pretty funny moments in the story and there are dual points of views. I liked the characters but kind of cringed with the H and his campus manho reputation. He literally went through every women on campus. He was likable but cringy at the same time. The h was a firecracker. I thought the story could have used a better transition of when the h went from loathing the H to loving him. I thought he deserved the beating at the end.

velvet kisses: younger woman, older guy scenario. The H is a professor on campus. The H is a playboy and stays away from commitment. He was in a long term relationship with his ex until she cheated on him and then married another guy. She shows up divorced with kids and wants another chance. The h is ten years younger and her ex cheated on her with her cousin.

Both of the characters are disillusioned with love but somehow find it with each other.

Likes: characters and story was likable. I liked that the H told the h that she and his mother were his only loves.

No likes: I didn't like the end when the H had zero faith in the h. He believed that she did something deceitful and would not give her a chance to explain. She had to chase him to try and get him to listen. I also did not like the H seeking out his ex for some sexual relief after he thought the h wrote something about him. He took off after he found some of his private paperwork in her nightstand. So what would have happened if he did not come across the paperwork? Slept with the ex over the misunderstanding because he would not give her a chance to explain that it was her cousin?

I liked this story the least in the trio.

country kisses: The h is a twin. She has a scar on her face and tries to hide it from the world. She winds up with the H who knows about the scar. The H is her roomie's older brother. She does not let the roomie know about her relationship with her brother and she does not tell the H that his sister is her roomie. The two do fall for each other despite obstacles.

The H's ex shows up and tries to win him back. She cheated on him in high school. The h is not aware that the ex was the H's ex when she gives her advice on how to win back the guy that got away. Everything hits the fan when the H tries to be nice to the ex since she was a new student on campus and only knows him and his sister. The sister hates her because she cheated on her brother. All of them wind up at his sister's party. More problems because the H invited the ex to the party and not the h. The h showed up with the roomie.

This was not a bad story. I thought the H was an idiot when he tried to make the ex comfortable in a new school environment and did not consider the h's feelings. The ex flat out told him she wanted him back. He should have walked away from her at that point. I thought the h should have also been upfront about her connection to both siblings. I liked that the H knew that the h was his first love and that the ex was not.

It is a 3 plus star recommend.

MHLap
5,0 van 5 sterren Cozy Mystery Valentine’s Day Set
13 januari 2020 - Gepubliceerd op Amazon.com
Geverifieerde aankoop
This is a great collection of Valentine’s Day cozy mystery stories from the Murder in the Mix series. The stories revolve around Lottie Lemon, her family and friends, and the men in her life. Lottie owns the Honey Hollow bakery in Vermont. She has the ability to see the ghostly pets of recently departed murder victims. These pets help Lottie as she tries to solve the crime. All of the novels are standalone or you might want to read all of the books in order. It’s one of my favorite series!
Meer lezen
Een iemand vond dit nuttig
Vertaal recensie in het Nederlands

Kristy Redderson
5,0 van 5 sterren What a steal!!!
13 januari 2020 - Gepubliceerd op Amazon.com
Geverifieerde aankoop
This set is an amazing deal, packed with the best love stories that will make you swoon! While most romance novels may feel as if you are watching the couple from the outside, Addison has a way to make you feel as if you are living through these characters!
Meer lezen
Een iemand vond dit nuttig
Vertaal recensie in het Nederlands