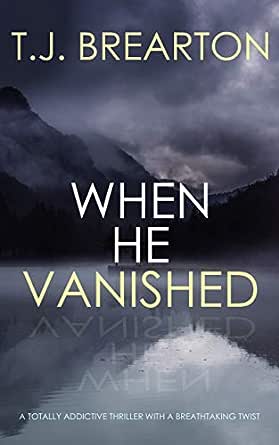 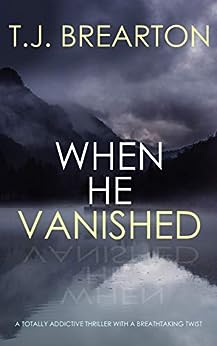 A HEART-POUNDING THRILLER WITH A STUNNING TWIST

WHAT IF YOUR HUSBAND DISAPPEARED AND THE POLICE THOUGHT YOU MIGHT HAVE KILLED HIM?

Jane Gable returns from her shift at the hospital one night to find her two children asleep in bed and her husband gone, his phone and wallet left behind.

John has long been a responsible and dependable man, maintaining a predictable schedule. He is a former alcoholic, and so Jane fears he has relapsed and may be in trouble.

An ‘old friend’ of John’s, Bruce Barnes, turned up on their doorstep the day before his disappearance.

Jane’s son Russ had seen a mysterious blonde woman at the house.

An SUV keeps showing up. Jane feels watched and under threat.

Then John’s abandoned car is found with blood on the steering wheel and Jane fears the worst. And there is a revelation that will make her question her own sanity.

Jane desperately begins investigating on her own. Suspects include her ex-husband, her stepbrother, and the mysterious blonde.

Is she being framed? Can she even trust herself?

HOW FAR WILL SHE GO TO SAVE HER FAMILY?

WHAT READERS ARE SAYING ABOUT WHEN HE VANISHED

“A chilling mystery with plenty of twists and turns which will keep you guessing until the very end.” Barbara

“Had me from the first page and didn't let go until the last.” Gail

LProd
5,0 van 5 sterren Riveting
15 mei 2019 - Gepubliceerd op Amazon.com
Geverifieerde aankoop
This is a brilliant, wonderfully written, taut and twisty psychological thriller. Brearton had me just with the premise of the husband going missing. Usually it's a woman who has vanished. He absolutely delivered! I couldn't put this down and could not sleep until I had found out what really happened. I absolutely love how deliciously creepy and unsettling this book is, and how nothing is as it seems. You'll be guessing the entire way which is the mark of a great mystery/thriller writer. Usually I have things figured out very early on. Not with this one. When He Vanished will definitely get your heart pounding. Fantastic and riveting!
Meer lezen
21 mensen vonden dit nuttig
Vertaal recensie in het Nederlands

T Morgan
5,0 van 5 sterren How to cope when nothing makes sense? And now her husband is just...gone!
31 mei 2019 - Gepubliceerd op Amazon.com
Geverifieerde aankoop
When her writer husband vanishes, Jane knows it's totally out of character for her husband to take off without letting her know at least SOMETHING. A quick errand, a quick trip for writing inspiration...but leaving the children home alone while Jane is still at work? No. Strange things have been happening and Jane can't decide what she even thinks happened. Is John a different person than she ever knew? And then his car is found, blood on the steering wheel. But that's barely the beginning.
I really, really enjoyed this story. It's written from Jane's point of view while she tries to cope as the probabilities keep changing. She cooperates with the police but isn't averse to doing a bit of sleuthing on her own; after all, this is her husband, the father of her children!
The book was clearly professionally edited, the writing was easy to follow and the characters and settings were well-developed and interesting. I loved it all.

Susan1
3,0 van 5 sterren “Sometimes I Think I’m Afraid To Feel Good”
16 juni 2019 - Gepubliceerd op Amazon.com
Geverifieerde aankoop
A marriage, two children, father works out of the home, mother is a Nurse Practitioner. The father, John, is a moody writer of crime fiction. The mother, Jane, tells this story and is the one with an active imagination. They live in a small town In Upstate New York. The story is, of course, about John going missing. There are lots of characters and events, and few clues to what happened to John that kept me reading with interest. This author is a descriptive writer, whose books I thoroughly enjoy. I can only say this is my least favorite.

That is because I am letdown by not really knowing WHY everything happened. Twists and surprises, yes. WHY? No.

Bets
5,0 van 5 sterren Well Written Suspense
13 juni 2019 - Gepubliceerd op Amazon.com
Geverifieerde aankoop
This is the first book by T. J. Brearton that I've read. I really thought I knew who the bad guy was but there were many twists and turns. How does someone explain to the cops that they don't know where their husband is? Then his car is found but not him. I was almost ready to give up, but I had to know who did it and why. This was an exhausting book to read with lots of suspense.
Meer lezen
8 mensen vonden dit nuttig
Vertaal recensie in het Nederlands