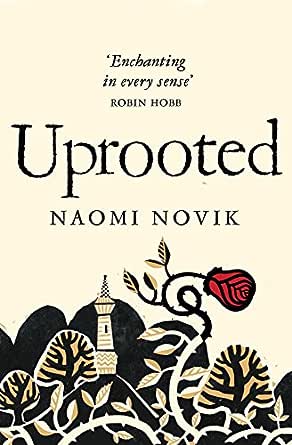 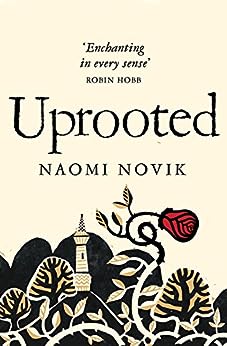 "Uprooted has leapt forward to claim the title of Best Book I've Read Yet This Year. . . . Moving, heartbreaking, and thoroughly satisfying, Uprooted is the fantasy novel I feel I've been waiting a lifetime for. Clear your schedule before picking it up, because you won't want to put it down."--NPR "A very enjoyable fantasy with the air of a modern classic . . . Naomi Novik skillfully takes the fairy-tale-turned-bildungsroman structure of her premise . . . and builds enough flesh on those bones to make a very different animal. . . . The vivid characters around her also echo their fairy-tale forebears, but are grounded in real-world ambivalence that makes this book feel quietly mature, its world lived-in."--The New York Times Book Review "Novik here delivers a tale that is funny and fast-paced, laced with hair-raising battle scenes and conspiracies; it also touches on deeper ecological concerns we grapple with today."--The Washington Post "Novik takes us on a surprise-filled journey. . . . The resulting warmth and intimacy provide a nicely nurturing environment for her heroine's unusual adventures."--The Seattle Times "Breathtaking . . . [Novik] weaves a tale that is both elegantly grand and earthily humble, familiar as a Grimm fairy tale yet fresh, original, and totally irresistible. This will be a must-read for fantasy fans for years to come."--Pubilshers Weekly (starred review) "Drawing on her Polish heritage and fairy-tale tropes, [Novik] has penned an original and fully realized fantastical place guaranteed to enthrall her longtime fans and attract new readers. This exceptional fantasy for adult and teen readers should appeal to those who love fairy-tale influenced stories such as Robin McKinley's Spindle's End."--Library Journal (starred review) "Every so often you come upon a story that seems like a lost tale of Grimm newly come to light. Uprooted is such a novel. Its narrative spell is confidently wrought and sympathetically cast. I might even call it bewitching."--Gregory Maguire, bestselling author of Wicked and Egg & Spoon "The magic in Uprooted, with its realistic moral dimension, is so vividly believable that it almost seems you could work the spells. But the book will do that for you."--Ursula K. Le Guin, award-winning and bestselling author of The Earthsea cycle "Uprooted has everything I love: a great heroine, new takes on old myths and legends, and surprising twists and turns. A delight."--Cassandra Clare, New York Times bestselling author of The Mortal Instruments series "Magical and practical, otherworldly and planted in the real, I could not stop reading this book and neither will you!"--Tamora Pierce, New York Times bestselling author of Trickster's Choice and Trickster's Queen "Wild, thrilling, and deeply, darkly magical. An instant classic."--Lev Grossman, #1 New York Times bestselling author of The Magicians Trilogy

A dark enchantment blights the land in the award-winning Uprooted – a enthralling, mythic fantasy by Naomi Novik, author of the Temeraire series.

Agnieszka loves her village, set deep in a peaceful valley. But the nearby enchanted forest casts a shadow over her home. Many have been lost to the Wood and none return unchanged. The villagers depend on an ageless wizard, the Dragon, to protect them from the forest's dark magic. However, his help comes at a terrible price. One young village woman must serve him for ten years, leaving all they value behind.

Agnieszka fears her dearest friend Kasia will be picked at the next choosing, for she's everything Agnieszka is not – beautiful, graceful and brave. Yet when the Dragon comes, it's not Kasia he takes.

O.U. Ramautarsing
5,0 van 5 sterren Otherworldly and yet so imaginable
25 oktober 2019
Indeling: Kindle-editieGeverifieerde aankoop
If you look through your eyelashes and hum to your own melody, maybe you could find the magic too. The world Naomi Novik has created has swept me inside the novel and has released me hours later in the middle of the night. I devoured the pagea, almost like food for the starving. Do read this book if you like magical twists, strong female characters and good storytelling. This is quite a story.
Meer lezen
Nuttig
Commentaar geven Misbruik melden
Vertaal recensie in het Nederlands
Alle 1 klantenrecensies bekijken
Klantenrecensie schrijven

Shadow Reader
5,0 van 5 sterren Magical and beautiful
13 januari 2018 - Gepubliceerd op Amazon.com
Geverifieerde aankoop
Magical tale based in large part on Polish fairy tales about Baba Yaga and her hut on chicken foot, about Poland and Russia and their never ending-conflicts about. Agnieszka (polish name) is a young girl with no skills other then being a total, grimy and clumsy mess. When it is discovered she has magic of her own it is as undisciplined and chaotic as the girl herself, however it is quite potent. When mixed with her masters magic it produces miraculous results. At the heart of the story is loyalty, friendships, love, greed, power and vengeance. Not everyone escapes unscathed but those who do have to find their own way to happiness. I loved it and found it breathtakingly beautiful.
Meer lezen
50 mensen vonden dit nuttig
Vertaal recensie in het Nederlands

This is now the second book I’ve read recently that I’ve considered overhyped. From what I’ve heard it’s another retelling of Eastern Europe folklore, similar to The Bear and the Nightingale, so I guess I can’t really say anything about how the story unfolds as a standard unexpected chosen one tale.

What I will freely bash instead is Sarkan, as in he’s an irritable prick throughout the story and doesn’t get much better by the end. I’ve seen people say in reviews that they ended up liking him, but even as a fellow misanthrope, I just couldn’t relate. At one point, the MC makes contact with him from a great distance away, something that was unheard of in the book world, and his response was to be annoyed. Lovely.

I don’t even mind the rather graphic sex scene towards the end section, a refreshing take on fantasy sexuality (instead of the typical fade to black, or full on lack of it Sanderson style). But I just don’t understand what the MC sees in him. He’s even close to irritable during that, FFS.

The relationship is almost creepy in a Stockholm syndrome way. I genuinely feel like the book would have been better without him at all, similar to how it ended with the MC tending to the sick heart trees; that section was good, and then Sarkan shows up at the end to dispense more boring irritability.

All in all, I’ve decided to start doing more research into what well-reviewed books are based on, because apparently retold Eastern European tales aren’t my cup of tea. Or maybe I’ve missed the point entirely, who knows. Onward to a new book.
Meer lezen
36 mensen vonden dit nuttig
Vertaal recensie in het Nederlands

Kathleen Edwards
5,0 van 5 sterren The witch... The Wood... The dragon
31 mei 2017 - Gepubliceerd op Amazon.com
Geverifieerde aankoop
I really enjoyed getting lost in this book. It draws you in to The Wood. I reached the end and felt a bit confused, I had to blink and look around and realize I was no longer in The Wood, but sitting in my living room...

I could really relate to the main character. I understood the way she felt, her frustration and the way she coped and succeeded. Doing things her way, the way that was comfortable, not the "correct, spelled out way". It took me back to my old Polish neighbors that I would visit as a child. The comfortable life, herbs hanging from the rafters, hot sweet tea..

I wish there was another one to read...
Meer lezen
33 mensen vonden dit nuttig
Vertaal recensie in het Nederlands

On a side note. I’ve read a few reviews that go on about the horrible way Sarkan treats Nieshka, and how it’s SUCH a bad model for relationships. While I agree he isn’t the nicest guy sometimes, he just seems more like the isolated, grumpy cat kind of person who’s seen too much in his life, not the horribly abusive older man taking advantage, as he was made out to be by some reviewers. Sure he shouldn’t call her an idiot, but he showed his true character through deed more than word, and more than once demonstrated his willingness to put her before himself.

All in all, a book that kept me hooked throughout, and rarely slowed down. If you aren’t too sensitive to some violence, I’d recommend it.
Meer lezen
16 mensen vonden dit nuttig
Vertaal recensie in het Nederlands

Meghan
5,0 van 5 sterren Wonderful, Imaginative, Charming
30 augustus 2017 - Gepubliceerd op Amazon.com
Geverifieerde aankoop
I loved "Uprooted!" This really is a book that has everything. Agnieszka is such a charming, likeable main character. She loves her family, her friends, and her life - all before the Dragon chooses her to serve him. The interactions between these two are often hilarious. He's a total brat - grumpy, rough around the edges, argumentative. And Agnieszka is his stubborn, sassy counterpart. The descriptions of magic in this are one of the best parts. And the plot!! You'll be on the edge of your seat for most of the book. The most beautiful aspect, to me, is how deeply she and Kasia love each other. Realistic female friendships are hard to come across in literature, but it never felt as if their love was put on the back burner for anything else. A wonderful, imaginative read.
Meer lezen
21 mensen vonden dit nuttig
Vertaal recensie in het Nederlands
Ga naar Amazon.com om alle 2.587 recensies te bekijken 4,6 van 5 sterren
Terug naar boven
Over ons
Verkoop bij ons
We helpen je graag
© 1996-2020, Amazon.com, Inc. en dochterondernemingen