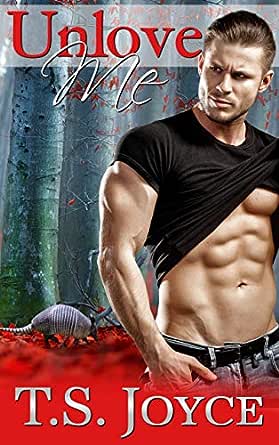 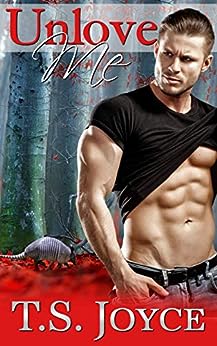 One wild night with friends, and Brock Evans comes up with a plan to rake in the room reservations at his lodge. Instead of celebrating Valentine’s Day, he is going to throw an UnValentine’s Day party for the singles who want to escape the hearts, and romance, and frills of February. But when a curvy beauty comes crashing into his lodge with eyes much too bright to be human, he is instantly intrigued. She has to be one of those shifters, but she fibbed about it on her room application, so she must be hiding something big. And the more he gets to know her, the more he wants to uncover all the mysteries that surround her.

Humans and shifters don’t mix. Armadillo shifter, Ava, learned that early on, so to avoid being denied for the UnValentine’s Day party at a rustic mountain inn, she tells a little white lie that snowballs her down a path she doesn’t expect. Brock is kind, handsome as hell, and a dominant personality compared to a submissive shifter like herself. He’s fun, and easy to be around, and her body ignites around him, but she is here for one reason, and one reason alone—to escape the pressure of the holiday. The last thing a girl like her needs is romance on Valentine’s Day, but Fate just might have other plans.

A. Richard
5,0 van 5 sterren Fun, passionate, and very imaginative
5 februari 2020 - Gepubliceerd op Amazon.com
Geverifieerde aankoop
When I discovered that T. S. Joyce had written a Valentine’s Day story, I was thrilled because I am always eager to read a holiday romance. Learning the book was also about a shifter doubled my enthusiasm since this author is a master when it comes to creating fascinating paranormal beings. After starting UNLOVE ME, I quickly realized the main characters were totally delightful, and unique situations could be found quite often.

Although Ava Dennis believed in love, she has not been lucky when it comes to celebrating Valentine’s Day with a boyfriend. When she learns of a lodge in Colorado that is having an UnValentine’s Day get-together for singles not wanting to participate in anything romantic, the armadillo shifter books a cabin and is looking forward to a relaxing time. While Ava hopes to keep her shifting capability a secret, it does not take long for Brock Evans, the lodge owner, to comprehend the undisclosed truth. Though she just wanted to spend some time not worrying about relationships, she does amazingly enjoy any of the moments that she and Brock interact.

Surprising developments make this story repeatedly intriguing, and I was constantly enchanted by the many unforeseen occurrences that take place. T. S. Joyce kept coming up with captivating situations, and I found the responses of Ava and Brock to be realistically portrayed for what each was facing. She is unsure of how he will react to her being a shifter, and he finds himself searching deep within himself for answers. While there are some touchingly emotional moments, there are an equal number of events which are amusing and caused plenty of smiles. The idea behind an UnValentine’s Day celebration is especially humorous, and I really enjoyed all the ways in which Brock and Ava could use “un” before a word. UNLOVE ME is fun, passionate, and very imaginative.
Meer lezen
3 mensen vonden dit nuttig
Vertaal recensie in het Nederlands

Kindle Customer
1,0 van 5 sterren Definitely No Love Here
7 februari 2020 - Gepubliceerd op Amazon.com
Geverifieerde aankoop
I probably own more T.S Joyce books than any other author and I typically love her books. Unfortunately, this book didn't do it for me. I felt like I was reading a sample, rather than a book, and it seemed one dimensional. Feels like she was very disconnected writing it and just kinda did it to check a box.
Meer lezen
6 mensen vonden dit nuttig
Vertaal recensie in het Nederlands

ZETTER
5,0 van 5 sterren Coming Out Of One's Shell!!!
5 februari 2020 - Gepubliceerd op Amazon.com
Geverifieerde aankoop
Ava Dennis, a graphic designer and an Armadillo shifter who hadn't been lucky when it came to love during this particular holiday. She told a little white lie in order to be able to attend an UnValentine's Day party at a rustic inn outside of Crested Butte, Colorado. She met the sexy as sin Adonis lodge owner named Brock. He was one of the sweetest people she'd met but she wasn't there to find love. Nope she was there to escape it.

Brock Evans, an owner of a lodge came up with a plan to increase rooms reservations after one crazy night with his friends. He was going throw an UnValentine's Dah party for all those single men and women who needed an escape from all those lovey dovey February stuffs. Then a beautiful, shy and curvy woman came crashing into his lodge intriguing him like no one ever did.

Despite her trying to keep whatever was happening between her and Brock from going any further, fate had other plans for Ava. She never knew what be loved meant until she met him. They got to know each other better and she also met some great friends along the way. One of Brock's friends was a shifter as well but he wasn't ready to talk about it with him out of fear.

It was a great to see Ava coming out of her shell and feeling comfortable in her skin. Gran (Brock's grandmother) was a riot, loved how she admitted her mistakes and gave her grandson credit for showing her how stubborn she was being.

Brock and Ava found what neither one of them expected....each and love.

UNLOVE ME is a stand-alone paranormal novel by T. S. Joyce. It was heartwarming, beautiful and a marvelous read. T. S. Joyce did a phenomenal job! 5++++

Kimberly
4,0 van 5 sterren Short, but doesn’t feel truncated
10 februari 2020 - Gepubliceerd op Amazon.com
Geverifieerde aankoop
Setting: Colorado
Genre: Shifter romance
Ava, a self-employed graphic designer in Long View, Texas, hates Valentine’s Day. Well, not really. She doesn’t dislike it enough to poop on other people’s ooey gooey romance, but she is definitely over eating canned soup, all alone. On a whim, she decides she’ll at least plan a nice meal for herself and looks up unValentine’s Day recipes online. What she finds instead is an advert for an unValentine’s Day Party at a mountain lodge in Colorado. She fills out the reservation, but then answers no to the last question. She denies being a shifter. It isn’t like she’s a big, scary shifter. The most damage an armadillo shifter will do is dig a few burrows in your yard. But then she meets Brock, the very handsome, funny, kind owner...
This is a short story very much as entertaining as Joyce’s longer works. Not only grammatically correct, but the protagonists are fully developed, the plot is tight, and, as usual, the repartee is witty AF. Of course, everything is condensed. The conflict, the resolution, the sex, the HEA. And yes, I do wish it had been longer.
Meer lezen
Vertaal recensie in het Nederlands

Steamy book momma
5,0 van 5 sterren An Armadillo shifter.
16 februari 2020 - Gepubliceerd op Amazon.com
Geverifieerde aankoop
This book is a standalone romance. Brock has this idea for Valentine’s Day. He decides to throw an UnValentine’s day Party. Ava is an armadillo shifter. She feels like her animal isn’t that great. It just curls up in a ball and hides. She is tired and when she sees the ad she figures why not? She does fib on her reservation by saying she isn’t a shifter. Surely, they are only asking because of ones that could cause damage not one like her. Brock knows there is something about her when she checks in. He thinks she is one of those shifters but doesn’t press. The more he talks to know Ava the more he wants to know. Could Ava and Brock be together. Ava knows human and shifters dating is frowned upon. She feels alive when she is around him. I loved this book so much. T.S. Joyce does an amazing job creating these worlds with her shifters. Ava and Brock are such great characters. And an armadillo shifter is just fantastic. I like that is was Ava who was the shifter this time. I can’t wait for T.S. Joyce’s next book. Fantastic job T.S. Joyce.
Meer lezen
Vertaal recensie in het Nederlands
Ga naar Amazon.com om alle 150 recensies te bekijken 4,8 van 5 sterren
Terug naar boven
Over ons
Verkoop bij ons
We helpen je graag
© 1996-2020, Amazon.com, Inc. en dochterondernemingen