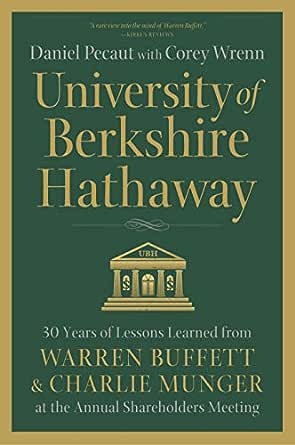 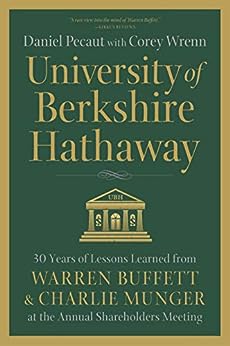 Will there ever be another investing book like this? It's unlikely.

University of Berkshire Hathaway is a remarkable retelling of the lessons, wisdom, and investment strategies handed down personally from Warren Buffett and Charlie Munger to shareholders during 30 years of their closed-door annual meetings.

From this front row seat, you'll see one of the greatest wealth-building records in history unfold, year by year.

the fine reverend besotted
2,0 van 5 sterren Title is false advertising. At best, pleasantly gossipy. But nothing material to be learned
1 november 2018 - Gepubliceerd op Amazon.com
Geverifieerde aankoop
If you are a Buffett or Munger or Berkshire Hathaway fanatic, you will love this book.

However, if you merely admire these gentlemen's competence and, so, actually expect to learn something material from a book which boldly states that it will teach you such, you will be very disappointed.

The authors apparently have attended the Berkshire Hathaway shareholders meetings for the past 30 or so years and have written a gossipy summary at the end of each year for their friends and associates.

Apparently realizing that Buffett and Berkshire are not "branded" and, so, a book about them is highly salable, they have decided to profit from their decades-old summaries by binding them together and implying there are "lessons" to be learnt.

Unless, you really find something enlightening in an annual update on the insurance premium float held by BH or want to hear repetitively how much Buffett admires Ajit Jain's ability to increase that float amount when Buffett felt there was no other insurance avenues to gain such increases.

You will "learn" that Buffett and Munger have little use for most of Wall Street's practices and financial theory. However, you will not particularly learn much more since all the authors do is state these gentlemen's position and, thereafter, report a "sassy" zinger by Munger or a "playful quip" by Buffett. I read this book to learn financial knowledge, not to learn that Munger is a bit of a jerk and Buffett is not as funny as he seems to think he is.

Even when financial theory is discussed, it is only to have Munger state it is "stupid" or, for variety, "dumb".

On the other hand, Berkshire Hathaway's practices are the "best".

Of course, the analogy is often false. BH is a conglomerate, yet Munger keeps treating it as if it were a simple corporation which happened to provide insurance coverage, along with Coca Cola, chocolate, railroad services, etc.

It is not. It is a conglomerate which owns several other corporations. So, stating that BH's policy of letting the CEOs of these corporations control the business and, otherwise, basing their salary on their corporation's profit is not particularly actionable in a regular corporation, where you cannot let a division operate independently nor allow an executive at a naturally profitable division make more salary than an executive who operates a less profitable but perhaps more integral and vital division.

Yet, Munger has no problem acting as if a conglomerate like BH is comparable to the typical corporation where salaries are not based upon the corporation's profit margin.

Same goes for portfolio theory. Buffett and Munger have gotten rich from buying a few companies. Good for them. However, to assume everyone has the knowledge and capacity to select three or four stocks which will steadily rise in profit is, let me say it, stupid given the obvious fact that Buffett is famous for being able to do what no else can do, pick such stocks. Yet, repeatedly we read Munger stating portfolio theory is stupid because a person can just pick three "solid" stocks and he/she won't have to worry about risk and, so, need not diversify his/her portfolio to reduce such risk.

As to Buffett, a "cute" story is told about how he knew an owner of an excellent business who would implode once or twice and state he intended to sell his business. After a week of ranting, the owner would calm down and admit he had a good business which he loved. Buffett got close to a friend of the owner and told him to let Buffett know the next time the owner imploded. When the next implosion occurred, Buffett immediately called up the owner to ask how things were going and, as expected, the owner ranted about how he had enough and would sell his business to the next willing buyer. Buffett promptly states he is that willing buyer and the owner in his rage says its a deal. A week later the owner calls back and heavily implies he now regrets the deal, hoping Buffett will rescind. Buffett, however, plays dumb and so the owner has to go through with the sale.

Despite the author's portrayal of this as a "cute" story, it is not. It is a ruthless use of another's known vulnerability for one's own gain. It is not a gentlemanly act. It is, however, an acceptable business act.

The authors apparently realize this and, so, try to imply the story as a morality tale, the owner was "emotional" and Buffett was "even-keeled" and, so, the owner caused his own loss by being "emotional". Morale: don't get emotional when you are investing.

However, the only "investor" in this story is Buffett, who has created nothing but simply cleverly bought other persons' realized visions. The owner actually built the business and, not surprisingly, he was more invested emotionally in it than would be an investor, like Buffett, who just sees the business as a money maker and so does not care a lick for the actual product, history, etc which were built with the blood and sweat of the owner. I accept Buffett's machination, however, my sympathy is entirely with the owner and Buffett's indifference is not a moral victory in my book.

The book is an okay read. Pleasantly gossipy and Buffett's and Munger's policy of keeping it simple comes through, which is nice to see. Munger may overuse "stupid" and, otherwise, fail to expand on his reason for such dismissive opinion, however it is clear that he and Buffett believe investing is too glamorized by Wall Street and the media and if one were to "look behind the curtain" he/she would see investing is too often sold as a form of gambling rather than what these gentlemen do believe, that investing is placing one's assets in a slightly more profitable place than a US Treasury bond and, so, the investment should be nearly as secured as it would be in such a bond.

Ironically, if there is any lesson to learn it is that one should not expect to get rich from investing - unless you can buy an insurance company and cleverly use its float to invest in other companies to increase profit and, thereby, use massive amount of insurance funds rather than just your meager personal assets to increase your own wealth.

In the end, the book is pleasant fluff with no educational merit. So, if you find reading about Buffett, Munger, or BH to be "entertaining", you should read it. Otherwise, give it a pass. I wish I had.

Hari Nair
5,0 van 5 sterren A real university
25 juli 2017 - Gepubliceerd op Amazon.com
Geverifieerde aankoop
The book encapsulates the incredible journey of Warren Buffett and Charlier Munger using the Berkshire Hathaway annual shareholder meetings as a source of wisdom about their investment philosophy. The miracle of Berkshire Hathaway has been analysed numerous times - by way of an autobiography of Buffett, analysis of speeches, writings, investments, etc. to garner the secret sauce of the success - but using annual meetings and the proceedings is a rare but unique method. One common denominator is the simplicity of investment methods (Ben Graham's 1934 & 1949 books remains their Bible) and consistency. Buffett/Munger methods are timeless - the emphasis on large margin of safety (gap between value and price - focussing on businesses that have predictable cash flows like food, daily use items with high brand recall), use of intrinsic value as a decision point (not daily vagaries of stock price movements or use of hyper technical and fancy methods involving graphs, buzzwords, consultant driven acronyms), avoidance of "two super-contagious diseases, fear and greed", ignoring macroeconomic factors (rather solely focussing on value of the company), and lastly, able and trustworthy management (paper record of actual performance not interviews). On personal habits, their willingness and eagerness to learn, relearn and continuously updating their knowledge by reading, networking, and understanding are remarkable. Not that all decisions have been right - Salomon Brothers surely was, but on account of impeccable integrity and stature of Buffet, Hathaway could wriggle out without much ado. The book has lot of witty one liners - that convey the essence of what is Berkshire like "The danger of relying on historical statistics or formulas is that you end up betting on a 14-year-old horse with a great record but is now ready for the glue factory", or, "Where a large corporation might go bonkers and develop an entire floor of currency traders—probably hedging the company on currencies for which it had no exposure—Berkshire seeks to keep things simple, “so the chairman can sit and read annual reports all day”, or It is crazy to give up something you know for something you do not”, or "Unlike a crowded theater where you can just leave your seat and run for the exit, in finance, you must find someone to take your seat", and "Buffett opined that envy is the least fun of the seven deadly sins because it leaves you feeling awful." The book is an essential read as it chronicles how brick by brick Berkshire was built, and the timeless concepts and thinking that went behind it.
Meer lezen
25 mensen vonden dit nuttig
Vertaal recensie in het Nederlands
Ga naar Amazon.com om alle 258 recensies te bekijken 4,5 van 5 sterren
Terug naar boven
Over ons
Verkoop bij ons
We helpen je graag
© 1996-2020, Amazon.com, Inc. en dochterondernemingen