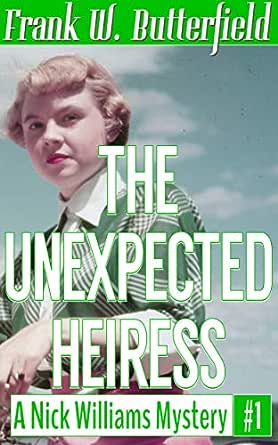 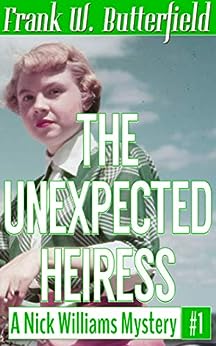 The richest homosexual in San Francisco is a private investigator.

Nick Williams lives in a modest bungalow with his fireman husband, a sweet fellow from Georgia by the name of Carter Jones.

Nick's gem of a secretary, Marnie Wilson, is worried that Nick isn't working enough. She knits a lot.

Jeffrey Klein, Esquire, is Nick's friend and lawyer. He represents the guys and gals who get caught in police raids in the Tenderloin.

Lt. Mike Robertson is Nick's first love and best friend. He's a good guy who's one hell of a cop.

It's late at night when Nick's evil father, Dr. Parnell Williams, calls to inform his son that Janet, Nick's sister, has been in a freak automobile accident and is fighting for her life in the hospital. With Carter, his loving husband, in tow, Nick arrives just in time to say goodbye.

The next morning, Nick discovers that Janet's death wasn't an accident. It was premeditated murdered. Nick goes poking around and uncovers a family secret. Can he find the killer and prevent the next obvious murder from happening?

The Unexpected Heiress is where the adventures of Nick, Carter, Marnie, Mike, and all the gang truly begin. Read along and fall in love with the City where cable cars climb halfway to the stars.

Long before the Summer of Love, pride parades down Market Street, and the fight for marriage equality, San Francisco was all about the Red Scare, F.B.I. investigations, yellow journalism run amok, and the ladies who play mahjong over tea.

Nick Williams, heir to a vast fortune, lives with his lover, Carter Jones, in the Eureka Valley neighborhood of San Francisco at 137 Hartford Street in an unassuming bungalow. Little do the neighborhood ladies, who do their daily marketing on Castro Street, know that just down the street their neighbor is the richest homosexual since possibly Alexander the Great. His no-nonsense secretary Marnie Wilson keeps things together at the office in the Tenderloin at 777 Bush Street. To her frustration, Nick is always turning away clients. He doesn't really need the money, after all. In The Unexpected Heiress, Nick is called in to see his lawyer and friend, Jeffrey Klein, whose mystery client, under contract to Metro, was just arrested at the Kit Kat Club on Polk Street but somehow got off with a bench warrant. Jeffrey wants to know who in the police department worked things behind the scene for the star of the upcoming blockbuster It Was Raining Then. Meanwhile a late night phone call from his estranged father sends Nick into a tailspin and a family secret, along with a lot of other things better kept hush-hush, are all splashed on the front pages of the daily newspapers. It ain't pretty. In the end, for Nick and Carter, it's actually the beginning of a whole new way of doing business. Long before the Summer of Love, pride parades down Market Street, and the fight for marriage equality, San Francisco in 1953 was all about the Red Scare, F.B.I. investigations, yellow journalism run amok, and the ladies who play mah jong over tea.
click to open popover

Sean Andrew McNamara
5,0 van 5 sterren There's a new story to tell!
19 april 2018 - Gepubliceerd op Amazon.com
Geverifieerde aankoop
This will be the start of a wonderful relationship! The Unexpected Heiress takes us to a familiar place and time but written in a refreshing genre free from "same ole, same ole" plotting and pacing. It's a story of adventure, loss and betrayal in a specific time of our characters lives. And what lives, gay in the US in the early 50's , in San Francisco. It's tale of great love and passions set against a hard and uncaring atmosphere of hate and fear-and the people who cause it and those who suffer because of the choices they make. Nick Willams and Carter Jones have made a life decision and are fighting with the world to just be. Nick has inherited a boatload of money which draws more attention to the negative side of life, he is hounded mercilessly by the yellow journalism that passes for news in the day. Nick and a smart mouth, and a short temper to boot and Carter is his constant companion and cheering section as they pick their battles and keep moving. This book tells more of the beginnings and the people who you will meet and hear more of as the story progresses-all through the eyes of Nick Williams! I lloved this and was floored at the amount of topical research that went into making this read true. The book entertained me, hurt my feelings and boiled my blood-can't wait for more!
Meer lezen
2 mensen vonden dit nuttig
Vertaal recensie in het Nederlands

John
5,0 van 5 sterren The way the 1950s should have been
28 oktober 2016 - Gepubliceerd op Amazon.com
Geverifieerde aankoop
Yes, it's set in a time when being gay could get you fired, ostracized, or worse. But somehow Butterfield makes it seem like all that doesn't matter, and just gets on with telling a great noir-style detective story. It really is just like something Raymond Chandler would write -- only lighter, funnier, and with more sun -- and I absolutely loved it.

Butterfield also very capably evoked scenes and settings. If you want a book that pulls you into a Hollywood-style set, this is it. Grant lawyer's offices, top-of-the-world restaurants, craftsman-style houses, and even grand cathedrals are all brought into life and given vivid, sun-drenched colors.

I can't recommend this book enough.

Erin O'Quinn
5,0 van 5 sterren 50s San Francisco: a series begins
19 september 2019 - Gepubliceerd op Amazon.com
Geverifieerde aankoop
As a long-time reader of crime stories, from hard-boiled to over-easy…and as a fan of m/m mysteries… I thought Frank W. Butterfield has hit all the right notes in his debut series work THE UNEXPECTED HEIRESS.

The principal character, Nick Williams, is crisp and human and smart. His lover Carter is loving and funny. The various people they surround themselves with, and who begin to form a loose “security team” in this opening story, are entertaining and real.

Kudos to the author for making San Francisco a vibrant character along with the others, and for “outing” a sensational queer private dick named Nick in the bad old days of the early 50s, when to be exposed as gay was to be literally ruined. But it's true that money can buy damn near anything...and Nick uses his fortune to squeeze the right nuts in a time of squirrels.

It’s clear that the author has done his homework, from telephone exchanges to cars to fashion. I especially appreciate his affectionate homage to a beautiful dame called San Francisco.

The subtext...history's war on gays... never gets in the way of a good story. And the sex, while never prolonged or explicit, seems perfect for two men who obviously and deeply love each other.

Read this first case, then hang on for the ride, because Butterfield is just revving up the engine on what’s sure to be a classic series!
Meer lezen
Een iemand vond dit nuttig
Vertaal recensie in het Nederlands

Kindle Customer
4,0 van 5 sterren 1950's nostalgia combined with the hard truths of life for a gay man in the time period
8 november 2018 - Gepubliceerd op Amazon.com
Geverifieerde aankoop
Ah, the first book in a long series and it's a M/M historical - these are a few of my favorite things!

Set in San Francisco in 1953, Nick Williams is a PI and his man Carter is a fireman, recovering from an injury. Nick is impossibly rich due to an unbreakable trust from a gay uncle who took the family's gold rush money and made some great investments. Nick is free to pretty much thumb his nose at the Hearsts and his own Nob Hill family (who find his lifestyle deplorable), help those acquaintances who need a hand up, and do what he wants to do ... which is live in a small bungalow with Carter in Eureka Valley (the Castro) and occasionally solve a case or two.

There's there requisite all-around-sharp secretary Marnie, a cache of friends and a murder mystery which is definitely second place here to the cast of characters. You really get a sense of 1950's San Francisco and the postwar era where men still greet each other with "Where did you serve?" and The Examiner posts the names and addresses of men caught in raids of gay bars. Butterfield does a great job of combining the nostalgia with the hard truths of life for a gay man in the time period.

Leigh
5,0 van 5 sterren Once You Start, You Just Can't Stop!
21 april 2018 - Gepubliceerd op Amazon.com
Geverifieerde aankoop
The Unexpected Heiress is a wonderful introduction to Nick Williams and Carter Jones -- lovers, partners, friends and soul mates. It's set in the 1950's when homosexuality wasn't just socially unacceptable, it was illegal. With that as the backdrop, there's a lot going on, from the death of one of Nick's family members, to Nick himself being declared public enemy #1 by William Randolph Hearst, who had a hate on for anyone who didn't toe the heterosexuality line.

I love this book for a lot of reasons. Nick and Carter top the list, closely followed by the skillful way Frank Butterfield incorporates the historical happenings of the period into the story. He's clearly done a LOT of research, but it doesn't read like a dry history lesson. It's organic, flows naturally, and it's very interesting. It kept my attention throughout. Add to all of the above the wonderful supporting cast backing Nick and Carter up on their adventures and you've got an absolutely riveting read.
Meer lezen
Een iemand vond dit nuttig
Vertaal recensie in het Nederlands
Ga naar Amazon.com om alle 68 recensies te bekijken 4,3 van 5 sterren
Terug naar boven
Over ons
Verkoop bij ons
We helpen je graag
© 1996-2020, Amazon.com, Inc. en dochterondernemingen