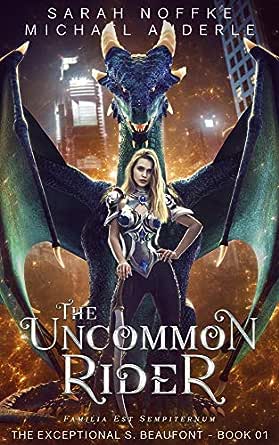 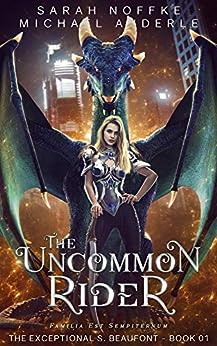 The first dragon rider in over a hundred years has been born.

Never before has a female been chosen to ride a dragon.

The Elite, a guild comprised exclusively of dragon riders, is dead according to most. No one has seen a rider in decades. The problems they used to fight overwhelm the world. Dragons are thought to be near extinction.

However, the Elite aren’t dead…

It’s just that a bunch of crusty, old men who do nothing that benefits the world at large are easy to mistake as useless corpses.

Sophia Beaufont is about to change all of that.

When the dragon egg that magnetized to her hatches, it sets Sophia on a new course. The Elite are immediately notified. She’s expected to train. To defend. To fight.

Sophia is ready to conquer evil, as the dragon riders should have been doing for centuries.

However, the Elite have been turning a blind eye, allowing the world to be overrun by criminals.

That’s all about to change.

S. Beaufont isn’t a girl who will be told to sit down and relax when a war is brewing that only a dragon rider can extinguish.

Allenccol
5,0 van 5 sterren What a great ride!
13 november 2019 - Gepubliceerd op Amazon.com
Geverifieerde aankoop
When Sarah finished her Luv Beaufont series I was bummed out. It was like one of the best storylines ever was gone.
At this point I found out that her younger sister would be in a new series, and they be Dragons! Far out!
I pre ordered the book and it showed up a couple of days ago. I was reading an old favorite so I finished that book first.
This book flat out kicks ass!!! You can tell how much of yourself you put in this story. I have two friends who are always asking about "What you reading now? I wish I had time to read" my usual response is yeah, and I wish I could walk. This year some of my friends are getting Fire tablets pre-order with some of my personal favorites, this book will be on that list. Keep them coming. It's getting cold, and my chair will not go in the snow.
Hope you made it through the fires unscathed

Eric
5,0 van 5 sterren Quest of life
8 november 2019 - Gepubliceerd op Amazon.com
Geverifieerde aankoop
Wow, it has been sometime since I enjoyed a fantasy book as much as I have the opening of this series. It says a lot for story for me to fore go sleep inordered to finish a huge book. Sarah has managed to capture the world of dragonriders unlike most since Author Anne McCaffery first introduce me to the Dragon riders of Pern as a young boy. I personally think if you have follow the story world of Olivia Beaufont, then you will utterly fall in love with this story of Sophie and her dragon Lunis. It is the cynical and sarcastic humour that will force you to laugh. I recommend you pick up a copy today.
Meer lezen
10 mensen vonden dit nuttig
Vertaal recensie in het Nederlands

Yorkiemom
5,0 van 5 sterren Sophia comes into her own as a courageous Dragon rider! Excellent first book in the series
8 november 2019 - Gepubliceerd op Amazon.com
Geverifieerde aankoop
Sophie really takes charge of her destiny as the first female Dragon Elite. She is so edgy, undaunted, and courageous as she travels alone to begin training with the Dragon Elite. This book is a fast read, I didn't want to put it down. Lunis is still growing and begins his own training with the dragons. Saying Sophie is not what was expected as a new Dragon Rider is a gross understatement! Sophie must fight for her right to be right to stay and be trained as a Dragon Elite. I loved every minute and page!
Meer lezen
9 mensen vonden dit nuttig
Vertaal recensie in het Nederlands

SEERinc
5,0 van 5 sterren Dude...
14 november 2019 - Gepubliceerd op Amazon.com
Geverifieerde aankoop
Sarah has continued her amazing win streak with this new series! Sophie and her dragon are upending the entire world,not to mention the expectations of a group of heroes who have been in hiding these past few hundred years.
Oh,the humanity! It hurts so good!
Meer lezen
7 mensen vonden dit nuttig
Vertaal recensie in het Nederlands

katy
5,0 van 5 sterren Encourages Strong Women in a Positive Way!
28 december 2019 - Gepubliceerd op Amazon.com
Geverifieerde aankoop
I absolutely enjoyed this book. I am a longtime fan of the Dragonriders of Pern series, but have always been a little uncomfortable with the way the dragon overpowers the rider, and of course I don’t like how women are second class citizens on Pern. This first Dragonrider Elite book emphasizes the equal partnership between the rider and the dragon, and helps Sophia recognize her Strengths and Responsibilities as a Woman in what was always considered a man’s world. Without women, this world is only half alive and only half productive, and her sister Liv is a great role model for her in how to interact with the older Dragon Elites. This book could have gone heavily to one side or the other, but actually remains perfectly balanced, recognizing that everyone needs to learn from each other to do the best for others and themselves. I’m glad I purchased this book and look forward to the next one!
Meer lezen
4 mensen vonden dit nuttig
Vertaal recensie in het Nederlands
Ga naar Amazon.com om alle 107 recensies te bekijken 4,5 van 5 sterren
Terug naar boven
Over ons
Verkoop bij ons
We helpen je graag
© 1996-2020, Amazon.com, Inc. en dochterondernemingen