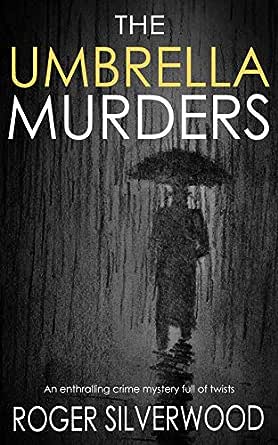 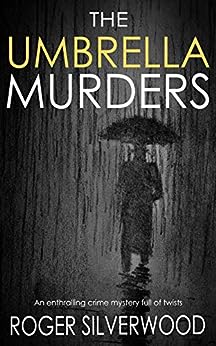 A DETECTIVE WHO’S NO ANGEL DESPITE HIS NAME.

MEET DETECTIVE INSPECTOR MICHAEL ANGEL. AN OLD-SCHOOL POLICEMAN WHO SOMETIMES RUBS HIS COLLEAGUES UP THE WRONG WAY. HE’S GOT HIS FLAWS, BUT HE NEVER GIVES UP ON A CASE.

Please note this book was first published as “THE UMBRELLA MAN.”

AN ARSONIST AND MURDERER THREATENS TO SET FIRE TO THE LUXURY HOME OF THE LOCAL MP.

Detective Inspector Michael Angel has two suspects. One has completely disappeared, the other is securely locked up in a police cell.

A search of the suspect’s home reveals a bizarre setup: a dozen umbrellas are suspended from the ceiling, packed with rice.

Will the umbrella man be able to execute his threat while still in police custody?

It appears to be a copy of an unsolved crime committed twenty-five years ago.

What’s the connection between the two disparate cases?

Michael Angel must race against the clock to unravel this baffling mystery.

THE DETECTIVE
Michael Angel is over fifty, married to Mary. They don’t have any children. They are a devoted couple but the relationship sometimes breaks down due to his job or due to the problems of Mary’s sister who lives in Edinburgh and imposes on their easygoing natures. Michael works at the small local police station and is devoted to defeating crime, murder, and dishonesty of any sort and has no personal ambition beyond being a good husband and a successful detective. He doesn’t want promotion with all the routine office work and stress that goes with it. He is incorruptible but always short of money. He is always at odds with his immediate chief, Detective Superintendent Horace Harker, who is lazy, a hypochondriac and not a bit interested in assisting Angel in serious police work.

THE SETTING
Bromersley is a market town at the bottom of the Pennines surrounded by stone and hawthorn-edged fields grazed by cattle and sheep. It is cold as anywhere in the winter but its closeness to the mountains protects it from many gales and heavy falls of snow. The town’s industry today includes the manufacture of ball bearings and whisky bottles, and a huge brewery produces Bromersley’s best bitter, which is considered the finest beer for miles around. Wednesday is market day, and the town centre is host to the frequent cries of stall-holders hawking their wares while the enticing smells of cheeses, coffees, foreign spices and fish and chips tempt your taste buds as you wander through the stalls. The police always find it difficult to catch pilferers and pickpockets in such a crowd. Bromersley folk are easy to befriend but many of the old people are stubborn and still buy their fruit and veg in pounds and ounces, not kilos and grams.

“A cast of characters you really want to populate with familiar faces of actors you see each week on TV —  great fun. Angel is terrific.” Books Monthly

Jolie Z
5,0 van 5 sterren You will never guess!
15 december 2019 - Gepubliceerd op Amazon.com
What is is that old cliche about an intelligent person? Yes! “ He has a mind like a steel trap.” This popped into my mind as soon as I finished the Umbrella Murders, because I think Roger Silverwood must have that kind of mind. His main character, Inspector Angel, is is just that- a real character with a cranky personality and very crafty brain who solves these convoluted murders while dealing with his ignorant power hungry boss who is ever bowing to the whims of the English entitled elite. But Angel has his team of police underling supporters who are ever ready to follow his lead, as experience has shown good results. The story never drags, you can see the locations, the action, the people as they become part of the story. The murder cases that Angel finally unravels are unfathomable (to me) until the astounding end. And that’s how I arrived at the steel trap quote. Great book!
Meer lezen
3 mensen vonden dit nuttig
Vertaal recensie in het Nederlands

KOBAM
5,0 van 5 sterren Fun Read
25 december 2019 - Gepubliceerd op Amazon.com
THE UMBRELLA MURDERS combine the form of detective novels of the late 1800’s through the 1950’s or thereabouts and the issues and investigation tools of today. The combination is a winner and the resulting story is a great read. I will definitely read more in this series.
Meer lezen
2 mensen vonden dit nuttig
Vertaal recensie in het Nederlands

Elizabeth P.
5,0 van 5 sterren Another winner
22 december 2019 - Gepubliceerd op Amazon.com
I love the Inspector Angel books. The Umbrella Murders is no exception. The characters are very believable and the mysteries will keep you guessing. I love Angel’s sayings. I highly recommend this book. I can’t wait to read the next one!
Meer lezen
Vertaal recensie in het Nederlands

Kindle CustomerKathryn Loewenstein
4,0 van 5 sterren My head was spinning
11 januari 2020 - Gepubliceerd op Amazon.com
What a story! Really had me guessing with all the twists and turns. Like all the characters and what an entertaining read. The author tied it all up in a neat package.
Meer lezen
Vertaal recensie in het Nederlands
Ga naar Amazon.com om alle 7 recensies te bekijken 4,3 van 5 sterren
Terug naar boven
Over ons
Verkoop bij ons
We helpen je graag
© 1996-2020, Amazon.com, Inc. en dochterondernemingen