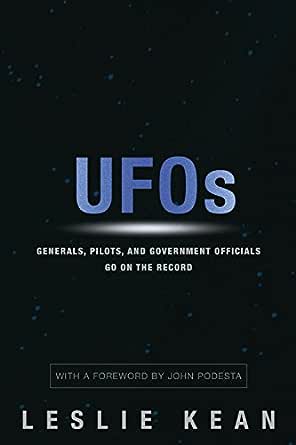 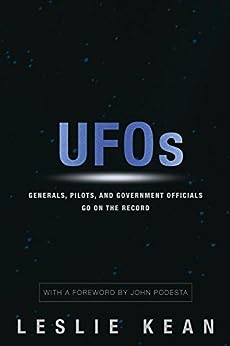 “A treasure trove of insightful and eye-opening information.”—Michio Kaku, PH.D., bestselling author of Physics of the Future

Leslie Kean, a veteran investigative reporter who has spent the past ten years studying the still-unexplained UFO phenomenon, reviewed hundreds of government documents, aviation reports, radar data, and case studies with corroborating physical evidence. She interviewed dozens of high-level officials and aviation witnesses from around the world. Among them, five Air Force generals and a host of high-level sources—including Fife Symington III, former governor of Arizona, and Nick Pope, former head of the British Defence Ministry’s UFO Investigative Unit—have written their own breathtaking, firsthand accounts about UFO encounters and investigations exclusively for this book.

With the support of former White House chief of staff John Podesta, Kean lifts the veil on decades of U.S. government misinformation about this mysterious phenomenon and presents irrefutable evidence that unknown flying objects—metallic, luminous, and seemingly able to maneuver in ways that defy the laws of physics—actually exist.

With a Foreword by John Podesta

“The most important book on the phenomenon in a generation.”—Journal of Scientific Exploration

“Written with penetrating depth and insight, the revelations in this book constitute a watershed event in lifting the taboo against rational discourse about this controversial subject.”—Harold E. Puthoff, PH.D., Director of the Institute for Advanced Studies at Austin

“Kean presents the most accurate, most credible reports on UFOs you will ever find. She may not have the final smoking gun, but I smell the gunpowder.”—Miles O’Brien, science correspondent for PBS’s NewsHour
click to open popover

Sailorman
5,0 van 5 sterren A Fresh Agnostic Approach to the UFO Question
3 september 2016 - Gepubliceerd op Amazon.com
Geverifieerde aankoop
In the early 1960’s, while attending the University of Dayton, I was a civilian employee of the United States Air Force at wright Patterson Air Force Base in Ohio, and lived in a house trailer across the highway from Area “B” (Aeronautical Systems Division, old Wright Field and home of the famous “Building 18”), when the Air Force Museum was in Fairborn and not in the middle of Area “B” and frequent SAC alerts rattled the trailer with B-52s and KC135s leaving the runway in Area “C” every 15 or 20 seconds. Those were the days of Major Donald Keyhoe and NICAP, Cpt. Edward J. Ruppelt and Project Bluebook, and the UFO flap of the late 50s and early 60s, and I was living at the epicenter of it all. I got hooked on the UFO phenomena then and wanted answers, even though my security clearance wouldn’t even get me a haircut in the base barber shop, and I have been hooked on it ever since.

Since those days I have read quite a number of books on the subject and I don’t know a whole lot more than I did back then. I don’t know what UFOs are, where they originate, or what they are doing here, but I damn sure want to know before they pat me in the face with a long handle shovel.

Most of the books I’ve read on UFOs start with the premise that UFOs are extraterrestrial spacecraft and then go about presenting cases that the author says can’t be explained otherwise. Leslie Kean’s book is different, and stands out from all the others, in that it takes an agnostic approach to the subject. As an investigative reporter she doesn’t even know if there is such a thing, and sets out to find out.

I became familiar with Ms. Kean through her appearances on the History Channel and the old H2 Channel. She impressed me, and when I saw that she had written this book I bought it.

Ms. Kean starts out completely neutral on the subject and only on the premise that there is something happening in our atmosphere that astronomers, military and commercial pilots, and average people on the ground have been seeing for years, and that is picked up routinely by commercial and military radar. She then goes on to establish and document proof that this is truly the case, before pursuing the question of what’s being seen.

The title of the book is “UFOs - Generals, Pilots, and Government Officials Go on the Record”, so I’m thinking WOW, she has a bunch of Major Donald Keyhoes, Dr. James McDonalds, Senators, Congressmen, Governors and the like, finally coming clean on UFOs. She does, but alas, they are not United States officials (dream on Sailorman) at least most of them. She does however present some pretty impressive information from files released from countries like France, Belgium, Brazil, United Kingdom and many other countries that are more open, public, and official about their investigation of the UFO phenomena, and in reporting their findings. She also reproduces interviews with many of these foreign commercial and military pilots, government officials, UFO investigators, professors, etc., many of whom are now retired.

While I still didn’t get my answers to what UFOs are, where they originate, or what they are doing here, I did learn that a lot of other countries take this phenomena very seriously, consider it a national defense and/or public air safety issue, and have set up and still operate official government agencies to study and try to understand it. Also, that the United States does too, but keeps it all secret (DUH, among one heck of a lot of other things) and are less than cooperative with other countries openly studying it.

This is certainly not you run-of-the-mill UFO book. It’s an easy read, full of new information, well documented, and well worth its price and the time it takes to read it. Buy it, read it, and enjoy it. You’ll learn a few surprising things; at least I did.
Meer lezen
76 mensen vonden dit nuttig
Vertaal recensie in het Nederlands

trot
5,0 van 5 sterren Fantastic book on a taboo subject and professionally conveyed. Just the facts on record, and some color from witnesses.
19 december 2017 - Gepubliceerd op Amazon.com
Geverifieerde aankoop
However I end up deciding to regard the information in this book, it will rank as one of the most enjoyable I've ever read. The accounts and historical record that Leslie Kean has compiled in this book are beyond astonishing; it is at times impossible to put down. I read this book after the December 2017 article in the New York Times was published ('Glowing Auras and Black Money'). Coming from that article, I found the information at first intriguing, and as I read further, revelationary. What she has succeeded in doing with this book is placing a perfectly fitting puzzle piece into the center of the rumor, witness, and innuendo of the subject as I've known it during my life. It was a shock for me to learn that major global powers have acknowledged and documented the existence of UFOs or UAPs, with the U.S. being the notable exception.

What the puzzle looks like when finished is still in question for me. There are several things that are hard to ignore after finishing the book, such as: a society and government now armed to the teeth in high resolution cameras and surveillance, not just among top-secret organizations but private enterprise, commercial airline, drones, etc., has yet to produce any truly compelling photographic evidence of these phenomena (with the possible exception of the previously mentioned article). Each time I would read a stunning account from a pilot, airline employee, or military personnel, part of the reveal would be the same dingy, blurry photos that have always existed and show next to nothing, or crude sketches on notepads. This does not dismiss the independently corroborated testimonies and radar confirmations, which remain very interesting, but for me seems a glaring omission. It would seem logical to assume that by these thousands of accounts, independently corroborated by equipment and persons, today we should at least have several more compelling cases that also include civilians taking out their phones to record. As far as I know we do not. When early in the book the author partially dismissed this due to the awe inspired by witnessing such an event, to the extent that people seem to never remember to take a picture, I found that pretty hard to believe. At this point it is instinctual.