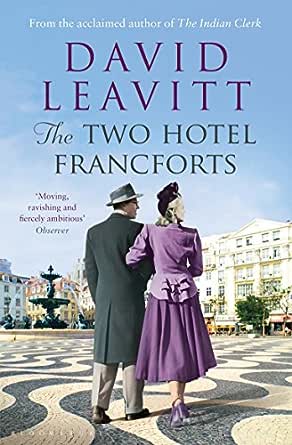 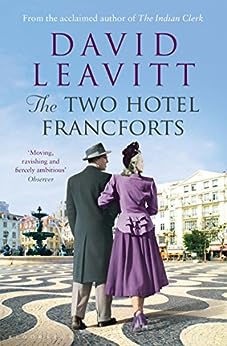 It is the summer of 1940, and Lisbon is one of the only neutral ports left in Europe – a city filled with spies, crowned heads and refugees of every nationality, tipping back absinthe to while away the time until their escape. Awaiting safe passage to New York on the S. S. Manhattan, two couples meet: Pete and Julia Winters, expatriate Americans fleeing their sedate life in Paris; and Edward and Iris Freleng, elegant, independently wealthy, bohemian, and beset by the social and sexual anxieties of their class. Swept up in the tumult, the hidden currents of the lives of these four characters – Julia's status as a Jew, Pete and Edward's affair, Iris's increasingly desperate efforts to save her tenuous marriage – begin to come loose. This journey will change the four of them irrevocably, as Europe sinks into war.
click to open popover

There comes a moment when your life changes. For Pete Winters that moment came when Edward Freling stepped on his glasses in a crowded cafe in Lisbon, Portugal. It's 1940 and the world is a chaotic place, with Hitler making his way across Europe. Lisbon is the only neutral port left, and refugees from all over Europe have crowded into Portugal, hoping for sanctuary or at least a place to wait until finding passage somewhere else.

Pete and his wife, Julia, are expatriate Americans forced to leave their longtime home in Paris when the city was occupied. They've been staying in Lisbon, although expected to sail back to the U.S., much to Julia's chagrin. The thought of having to return to America has completely unsettled her, as she had vowed to her estranged family she'd never leave Europe, but the fact that she's Jewish (a reality she understandably doesn't make public) complicates their ability to go anywhere else.

Edward and his wife, Iris, are independently wealthy writers, who have lived nearly all over the world. They, too, are headed back to the U.S. on the same ship as Pete and Julia. They are free spirits, loose where the Winters' are uptight, although they are not without their share of challenges.

The two couples find themselves continually thrown together, spending their days in cafes and sightseeing, their nights drinking. Julia would rather play solitaire and brood by herself, lamenting that she will have to leave Portugal. Pete and Edward, much to their surprise, begin a torrid affair. Pete finds himself quickly falling in love with Edward, imagining a life spent together. But while Edward, too, feels very strongly for Pete, his life and his marriage are far more complicated. Iris will do anything to keep her marriage intact.

"Because there are occasions when none of the choices are good. You simply have to calculate which is the least bad."

It's been said that certain things happen in wartime that wouldn't happen at other times. The same is true for the period leading up to war. People find themselves acting differently, thinking differently, making decisions they wouldn't otherwise make. But are those decisions, those feelings true, or just borne by circumstance? The Two Hotel Francforts is an introspective novel about relationships, about things said and unsaid, how you never can truly know what a person is thinking or feeling, or what secrets they've kept hidden, and how those secrets are affecting them.

I've always been a fan of David Leavitt's writing since I first read The Lost Language of Cranes years ago. He creates such vivid characters you can practically see with your own eyes, or imagine coming into contact with them in your daily life. His storytelling ability is on fine display in this book, which is at times passionate and moving, at times contemplative.

I enjoyed The Two Hotel Francforts but it left me with more questions than answers, particularly around Pete and Edward's relationship. I couldn't figure out if this was a whim for Pete or something he truly felt. I also found the way the plot was tied up rather confusing, as an incident pretty crucial to the whole story was told more in passing than anything else, and I was confused and frustrated by that.

In the end, this is a book that has several love stories tied together, as it explores secrets, dreams, fears, and frustrations. While it's not a perfect book, it's well written and compelling, and I'm glad to see David Leavitt back in the world of fiction again.

Anthony McGill
3,0 van 5 sterren NOT UP TO HIS USUAL EXCELLENCE
22 maart 2014 - Gepubliceerd op Amazon.com
Geverifieerde aankoop
This was a difficult one for me. I liked it but then I really didn't really like it. First, I may have been heavily influenced by my admiration of David Leavitt as one of my favourite authors. "The Lost Language of Cranes", "While England Sleeps", "The Page Turner", "Family Dancing" and "A Place I've Never Been" all rank with me as outstanding literary achievements. Unfortunately "The Two Hotel Francforts" didn't fall into this category. Although I found it an interesting read (and who can deny Leavitt's wonderful use of language), the overall effect left me disappointed and unfulfilled. I couldn't really bond with any of the characters even though each had a history which appeared more interesting than what was executed. The narrator Pete came off as cold and indifferent, Edward was a bore and neither Julia or Iris, despite having complex conditions, were explored sufficiently to satisfy this reader. Thought the first half of the book set up a lot of interesting situations but the latter part tended to fizzle out. And the sexual liaison between Pete and Edward was so passionless that it bored me as much as it seemed to bore them. And to quote another Amazon reviewer, Daisy the little fox terrier appeared to be the only sympathetic character and the only one we really cared about. No David Leavitt book is without merit and this is a reasonable effort but when you set such a high standard it's a trifle disappointing when your latest doesn't quite live up to that expectation.
Meer lezen
Een iemand vond dit nuttig
Vertaal recensie in het Nederlands

Eric Selby
2,0 van 5 sterren Mr. Leavitt Seems to Have Lost His Writing Talent
2 september 2014 - Gepubliceerd op Amazon.com
Geverifieerde aankoop
I have become disappointed by David Leavitt's more recent output. And this book is one I'll give two stars to although I really shouldn't do more than one. It is boring. The dialogues are far too long. And often there is nothnig to go with the dialogue. In other words, the author hasn't bothered to fill in the picture, the details of what people are doing as they yak and yak and yak. And the plot is...well, it actually isn't. The war in Europe is on and these four Americans need to get out, living temporarily in Lisbon, yes, one set of husband-wife in one Francfort hotel and the other with their dog, Daisy, in the other. Of course, as is usual in a Leavitt novel, the two men have sex. And one wife sets it up, sort of, while the other isn't aware (of course she would be if this were more realistically written) of what is going on even though every day the two men spend a chunk of it together! Please don't think I'm a homophobe. I'm gay. And I am fully aware that men back then did "it" secretly. But in this novel, the entire cast is unbelievable. I think I am no longer going to read up-coming Leavitt novels. Too bad. He once was such a great writer.
Meer lezen
Vertaal recensie in het Nederlands

Em B.
3,0 van 5 sterren Okay, But Would Not Read Again
11 juni 2015 - Gepubliceerd op Amazon.com
Geverifieerde aankoop
I read this novel in two days, so the quality of writing was enough to keep me interested. I found it to be a story about how two couples attempt to cope with the disappointments of their marriages. There are some poignant moments, places where each of the four characters realizes something about him or herself, which then moves the characters to act--one tragically; but that said, I didn't really like any of the characters, especially the main character, Peter. I've never been more bored with a narrator since David Copperfield. Several of the lines also were eye-rollingily melodramatic, and whole passages were dull. Leavitt pulls out a few plot twists in the end, but nothing that makes up for the lack of fulfillment in the central relationships.
Meer lezen
Een iemand vond dit nuttig
Vertaal recensie in het Nederlands
Ga naar Amazon.com om alle 130 recensies te bekijken 3,6 van 5 sterren
Terug naar boven
Over ons
Verkoop bij ons
We helpen je graag
© 1996-2020, Amazon.com, Inc. en dochterondernemingen