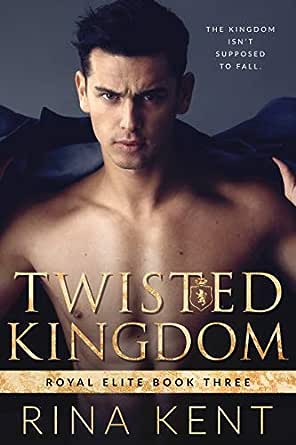 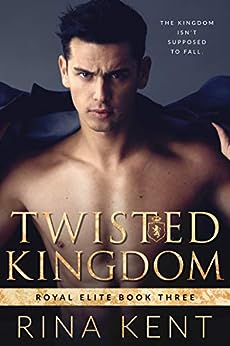 The kingdom isn’t supposed to fall.

The truth screws you over before it sets you free.
Masks drop.
Secrets unravel.
Elsa’s race after the past blinds her from the present.
I’ll fight for her.
I’ll bring her back.
I’ll protect her even if it’s the last thing I do.
We made a promise.
She’s mine.
Are you ready for one final game, sweetheart?

Twisted Kingdom is book three of Royal Elite Series and should be read after Deviant King & Steel Princess. This is a dark high school bully romance, mature new adult, and contains dubious situations that some readers might find offensive.

This book is the final part of a trilogy and is NOT standalone.

Ali Crean
4,0 van 5 sterren I'm ready for Knight now.
24 januari 2020 - Gepubliceerd op Amazon.com
Geverifieerde aankoop
The last books in trilogies are always tricky for me; it's like I'm watching my children leave the nest. The story is all grown up, and now I feel so fulfilled and still somewhat empty at the same time.

The ultimate ending of Aiden and Elsa's story ticked off all of my boxes, except for some backstory questions with which I've been struggling. How did Ethan know to show up at the Meet-Up at that moment? What is the actual heart condition Elsa suffers? I know how it started, but what is it she is at risk for developing--because at first, I thought it was some genetic thing, and then we find out 'oh-no worse.' But I don't understand resulting complications--then again I believe that is by far the last thing I should be cross-examining.

But HOW DID ETHAN KNOW TO GO TO THE MEET-UP THAT DAY?

So right, that is where Steel Princess left off, and Rina doesn't disappoint with the story continuation. I am attributing my Team Aiden campaign to the POV alternating in SP. But I'm not talking about which Horsemen team, but instead Team Aiden vs. Team Elsa. Twisted Kingdom opened up Aiden King's black heart, and I felt he had a wealth of character depth--but it served to prove to me that Elsa is a fickle and fairweather girlfriend who I couldn't support.

The majority of highlighting I've used for this reading was things Elsa did that pee'd me off, and by the time she got on board, it was too late for me. Deviant King, I was itchy on things like her willful ignorance of other people despite this rally point of strategy, chess, and Sun Tzu. Elsa is supposedly this master of the playfield -- she was crap at it then. She is crap at it now.

So by the time I came to the end of Twisted Kingdom, I had hoped that her growth would increase exponentially. Elsa isn't someone I like as a character, and as Kim, Silver, and Teal begin to form, she is even less impressive entirely.

There is a treasure trove of reveals in this last book. It delivers on a lot of promises made in the previous books. And some surprising POVs pop up in this that deepen the plot further.

I enjoyed the last part of this trilogy.

I do have one criticism, and that is that Rina Kent does some heavy-handed hinting that I don't feel it was necessary to plant to readers. It's unnecessary to tell your reader that there is more to a character than they know. If you write a compelling character, you don't need to justify that character for sympathy. She does this a few times with Silver, who she has received a great deal of grief over on her reader groups. I feel like it cheapened Silver's character to have Elsa tell us that we shouldn't judge her and that we should give her the benefit of curiosity.

Oh, also, meh on Knox. He feels like Ronan-lite. I don't need a diet-Ronan. I have one entirely sinful and enjoyable Ronan. Knox is fluff.

I Who Shall Not Be Name 🙂
5,0 van 5 sterren The EPIC finale of Elsa & Aiden, you do NOT want to miss!
23 januari 2020 - Gepubliceerd op Amazon.com
Geverifieerde aankoop
Rina did it AGAIN & she just proved why again with Aiden & Elsa! First thing I did was looked at how many chapters in Twisted Kingdom there was because I LOVE Elsa & Aiden so so much! I NEVER want their story to end & could read 100 chapters if Rina were to write it! I was really anxious not knowing what to expect from Rina because this woman is a game changer who kept playing mind games with us from day one with Deviant King & Steel Princess! I was so aggravated of all the SECRECY! I needed answers as soon as possible! BUT it was so so WORTH IT in the end because ALL (when I said ALL, ALL) our burning theories & questions we NEEDED was answered that left me feeling very satisfied! Black Mercedes, how is Ethan alive, who push Elsa into the pool, who’s Knox, new family member in the Steel family, and more depth into Aiden & Elsa past. I was also happy we got a POV from Ethan & Jonathan! I LOVE how Rina made Aiden so vulnerable in Twisted Kingdom, it was EVERYTHING!! I LOVE how everything came full circle! Rina never cease to amaze me with her writing! Aiden & Elsa conclusion was PERFECT! I was ecstatic & honor to receive & voluntarily reviewed an advanced copy of this book. Ah-mazing 5 stars read!
Meer lezen
Een iemand vond dit nuttig
Vertaal recensie in het Nederlands

This entire trilogy + Cruel King has literally had me white knuckling my kindle & then throwing it across the room, nursing multiple book hangovers and becoming fully obsessed with all things Royal Elite. (I regret nothing)😳

Twisted Kingdom..GAH! The ending to Elsa & Aiden's story was just EVERYTHING! We come full circle with these two all while navigating through broken memories, broken hearts, secrets, lies and one heck of an ending that I simply did not see coming. You go through it with A & E; every emotion...all the angsty goodness...their undeniable connection & an overall darkness that sucked me in from page one... SO GOOD! Honestly, I can't get enough of this book world that Rina Kent has created for us & I'm so excited for what's next from the Royal Elite🖤
Meer lezen
Een iemand vond dit nuttig
Vertaal recensie in het Nederlands

Melissa Gloria
5,0 van 5 sterren Aiden + Else = EPIC GOALS
24 januari 2020 - Gepubliceerd op Amazon.com
Geverifieerde aankoop
I was left with goosebumps after reading Steel Princess and anticipating Twisted Kingdom and Rina Kent delivered! Reading all of the different layers of Aiden, I swear I loved him even more. After the cliffhanger where Elsa's dad comes back from the dead at the end of Steel Princess Aiden wasn't going to let Elsa just walk out of his life and was determined to remind her who she belonged to.

I love Aiden and Elsa's story I'm just so sad their books are done. This book was a tear jerker and emotional and I couldn't put it down. If I thought Aiden was intense when he was a bully and you were his target then I hadn't read anything yet when he was in love. These are two intense and their chemistry is off the charts and I am so happy with the outcome. This series has ben one of my favorites and I cannot wait to read more in this series!!
Meer lezen
Een iemand vond dit nuttig
Vertaal recensie in het Nederlands
Ga naar Amazon.com om alle 135 recensies te bekijken 4,9 van 5 sterren
Terug naar boven
Over ons
Verkoop bij ons
We helpen je graag
© 1996-2020, Amazon.com, Inc. en dochterondernemingen