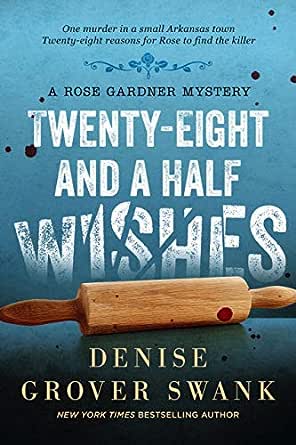 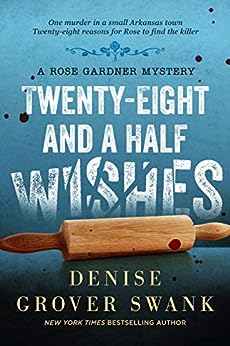 Twenty-Eight and a Half Wishes (Rose Gardner Mystery, Book 1) Kindle-editie

Praise for the New York Times and USA Today bestselling series: "Readers will root for the appealing heroine."
--Publishers Weekly "Light, fluffy, southern fun."
--Booklist "TWENTY-EIGHT AND A HALF WISHES is a nice mix of darker elements with some lightheartedness as balance...the light tone and smooth prose keep the story moving."
--Noir Journal "This was one of those books that I kept telling myself one more page, then I need to put it down. Instead I found myself tearing through the book instead, needing to know the outcome."
--Just Jump Book Reviews on Twenty-Eight and a Half Wishes "Readers will enjoy this lighthearted romantic suspense novel with a dash of comedy. The characters are memorable, the pace is fast and the dialogue is witty."
--RT Book Reviews on Twenty-Nine and a Half Reasons

"Though much of the book is light-hearted and occasionally outright hilarious, the author sneaks in a few home truths along the way that will hit you where it counts, like how even someone’s best intentions can box you in." --Everybody Needs a Little Romance

"This was one of those books that I kept telling myself one more page, then I need to put it down. Instead I found myself tearing through the book instead, needing to know the outcome." --Just Jump Book Reviews

"A southern mystery full of romance and fun!" --Goodreads review

****
For Rose Gardner, working at the DMV on a Friday afternoon is bad even before she sees a vision of herself dead. She’s had plenty of visions, usually boring ones like someone’s toilet’s overflowed, but she’s never seen one of herself before. When her overbearing momma winds up murdered on her sofa instead, two things are certain: There isn't enough hydrogen peroxide in the state of Arkansas to get that stain out, and Rose is the prime suspect.

Rose realizes she’s wasted twenty-four years of living and makes a list on the back of a Wal-Mart receipt: twenty-eight things she wants to accomplish before her vision comes true. She’s well on her way with the help of her next door neighbor Joe, who has no trouble teaching Rose the rules of drinking, but won’t help with number fifteen-- do more with a man. Joe’s new to town, but it doesn’t take a vision for Rose to realize he’s got plenty secrets of his own.

Somebody thinks Rose has something they want and they’ll do anything to get it. Her house is broken into, someone else she knows is murdered, and suddenly, dying a virgin in the Fenton County jail isn’t her biggest worry after all.

ZabrinaNichole
2,0 van 5 sterren 4-5 Stars? I don't get it...
5 juli 2017 - Gepubliceerd op Amazon.com
Geverifieerde aankoop
This book had so much promise. I always look at the summary and amount/grade of reviews before I dedicate a few hours of my life to a book. I'm the type that has to finish a book straight through, even if it's not very good.

Starting out it was good... great even. Highly rated. The pushover protagonist stands up to her momma and the mom is reminiscent of Hoyt's momma from True Blood?!? Sign me up. It's a murder mystery? Yes!

The opening was strong it had all the elements that make a great read. That was pretty much it, though. As it progressed it got more and more confusing and difficult to follow. I found myself skimming the pages just to get through to see what the heck was going on.

By the end it was very unbelievable. The story was confusing and felt sloppy. She's used by her sexy neighbor, more than once and just forgives him. Like that? Even after all of this strength she's been displaying? And he barely even grovels? I don't buy it.

I especially don't buy the ratings. This is a common occurrence, it seems, with these kindle books. I'm constantly disappointed by the 4+ star books I read on here. I guess my lesson is to not pay attention to the ratings.

Anyway, I wished it had maintained the momentum that it had in the beginning. I would have enjoyed it so much more.

Jayme Carruthers
5,0 van 5 sterren Wonderful characters - I want to know more!
13 juni 2019 - Gepubliceerd op Amazon.com
Geverifieerde aankoop
I was able to download Twenty-Eight and a Half Wishes for free, so I figured "Why not?" Then, it sat on my Kindle bookshelf for a while before I actually started it. WHY? WHY DID I WAIT SO LONG?

Rose is a boring, shy, outcast in her town - but one day she has a vision where she sees herself dead. Her visions usually come true so she's doing everything she can to try to stop it from happening! Instead, her mom is murdered and she ends up being the main suspect.

Once I started, I could not put this book down. I've never read a book by this author before, but I was hooked immediately. Denise Grover Swank has such a unique way of developing her characters. They come to life and I can imagine their life just as easily as I can the neighbor down the street.

This book was great and I'm glad I took the chance. I can't wait to read the rest of the series!

Brittany
5,0 van 5 sterren A MUST READ!
22 mei 2019 - Gepubliceerd op Amazon.com
Geverifieerde aankoop
Twenty Eight and a Half Wishes was my first book by Denise Grover Swank, and it definitely will not be my last! Rose Gardner re-evaluates her life, and realizes that she hasn’t really been living at all thanks to her oppressive mother. After a series of unfortunate events, she makes a list of 28 things or “wishes” to accomplish before she dies. Rose has visions throughout the book which will keep you laughing and also intrigued to find out what happens next. Her cute next door neighbor Joe agreed to help her with her list, and I loved seeing how their relationship evolved throughout this book. Twenty Eight and a Half Wishes has a bit of romance, mystery, and suspense, and I am looking forward to reading the next one!
Meer lezen
22 mensen vonden dit nuttig
Vertaal recensie in het Nederlands

Cris Bardan
5,0 van 5 sterren I'm definitely going to read the next one!
7 september 2018 - Gepubliceerd op Amazon.com
Geverifieerde aankoop
I had this book because it was free and left it in my library for so long. I went on a business trip and found myself looking through my Kindle app to read something and... best decision ever!

I loved this book, I don't usually read mysteries because I'm an anxious person and those usually get on my nerves in a bad way, but this book was awesome. I did not see anything coming, when I started I thought to myself 'oh! so obvious this is going to happen' and then it didn't... and everything else was a surprise in a very good way. I was so smitten by Joe and I knew something was fishy about him, and I'm still not sure about him, but he is nice to Rose so I'll allow it.

I love the way the story is written, I do feel a connection with each character. I love when stories are not about good and bad people, just people with different situations.

dsee
5,0 van 5 sterren Light Hearted Thriller
26 maart 2019 - Gepubliceerd op Amazon.com
Geverifieerde aankoop
I'm not sure why I describe this as a 'light-hearted thriller ' - there's definitely murder involved - maybe because Rose is such an uncomplicated/complicated character that it was refreshing to read of her many 'firsts'. The author kept the cast of characters to a handful, so I wasn't scratching my head & going back several pages to figure out who someone was. I liked the fact that there were no detailed, lewd bedroom scenes, just enough info to let your imagination full in the blanks. I'm eager to read the next book in this series.
Meer lezen
22 mensen vonden dit nuttig
Vertaal recensie in het Nederlands
Ga naar Amazon.com om alle 5.397 recensies te bekijken 4,4 van 5 sterren
Terug naar boven
Over ons
Verkoop bij ons
We helpen je graag
© 1996-2020, Amazon.com, Inc. en dochterondernemingen