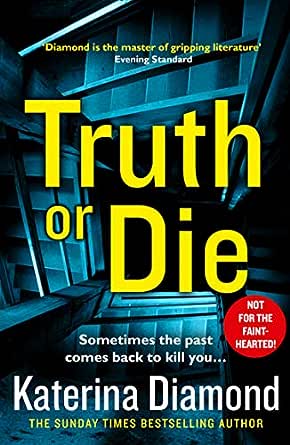 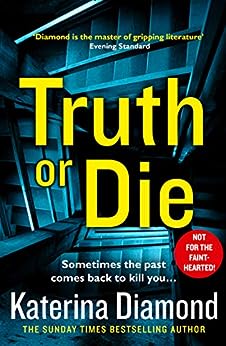 'A deliciously dark read, Katerina Diamond keeps her readers guessing throughout as she leads us on a very secretive, VERY twisted journey...everything I was expecting from a well-written, pacy thriller.' LISA HALL, AUTHOR OF BETWEEN YOU AND ME

'This fluid tale about a girl being held hostage is relentless and uncompromisingly dark.' HEAT

'This gem of a crime novel is packed with twists until the last page.' CLOSER

'Wow, I thought THE TEACHER was fantastic but THE SECRET is on another level. Was gripped all the way through and kept me guessing as the story unfolded.' NETGALLEY REVIEWER

'Another grim and gory spider's web from Katerina Diamond - closely following on from THE TEACHER and not letting up on the twists and turns.'
GOODREADS REVIEWER

'An impeccable novel with nail biting chapters...Katerina Diamond deserves the title of Queen of Crime, because I'll be damned if anyone writes novels like she does. 5* doesn't do this book justice.' THE BRUNETTE BOOKSHELF

'Has the feeling of a nightmare come to life...' LOVEREADING

'The suspense is literally out of this world.' COMPELLING READS

'A dark and twisted tale that had me gasping in fear.' HANDWRITTEN GIRL

The #1 bestseller is back with a twisty crime thriller, perfect for fans of Karin Slaughter and Angela Marsons.

‘All hail the new Queen of Crime’ Heat

The butchered body of a professor is found in a private office of Exeter University. It is the first in a spate of horrific murders that shakes the city to its core.

Who would target a seemingly innocent man, and why? DS Imogen Grey and DS Adrian Miles turn to his students for answers, but their investigation turns up no leads. Someone must know more than they’re letting on…

As the body count rises, the police have to look into the past to uncover the person responsible before it’s too late.

But are they brave enough to face up to the truth?

IF YOU LOVED TRUTH OR DIE, DON’T MISS KATERINA’S NEXT BOOK, WOMAN IN THE WATER – AVAILABLE FOR PRE-ORDER NOW

‘Had me hooked from the first page’ Goodreads Reviewer

Meg
5,0 van 5 sterren Sick Twisted and Absolutely Brilliant
3 september 2019 - Gepubliceerd op Amazon.com
Geverifieerde aankoop
Every time I read the next book in this series I think to myself how does Katerina Diamond do it, these books just keep getting better and better. Fat coward to the end of Truth or Die and I am literally sitting here with my mouth opening wondering how to give this review more than five stars!

The plot alone was amazing but then the twists and turns that she peppered throughout the entire book are just brilliant!

The story line definitely has some crazy sick moments which I absolutely loved and as always the personal life of both DI Grey and Miles makes you love them both even more!

I can not recommend this series enough to anyone who loves a great detective murder series....
Katerina Diamond’s Imogen Grey Series... read it... you will be happy you did!
Meer lezen
Vertaal recensie in het Nederlands

Christine A. AKA Philomath in Phila
4,0 van 5 sterren Book #5 of the DS Imogen Grey series
31 juli 2019 - Gepubliceerd op Amazon.com
‏I was provided with a complimentary copy of this book so I could give an honest review.

Truth or Die is the 5th book in the D.S. Imogen Grey series by Katerina Diamond. I did not realize it was part of a series until I was finished reading it. Reading the earlier books may help with understanding the characters and their behavior better, but it is not necessary. This book can stand alone.

DS Imogen Grey and DS Adrian Miles are partners who are very close in work and out. There is an attraction between them which is a storyline throughout the book and, according to reviewers on Goodreads, has been a slow-building theme woven throughout the entire series. However, the main storyline is the case they are investigating, the brutal murder of a college professor.

The cover has a warning indicating this is not for the faint-hearted. This is a fast-paced police procedural novel that is also a violent, dark, and graphic read. These scenes are not part of the book for mere shock value. They enhance the story and our understanding of the killer's thoughts and actions.

A 6th book is not listed on Goodreads, but I will be looking for it. In the meantime, I do plan to read the series from the beginning.

Kindle Customer
4,0 van 5 sterren Twisting thriller
14 juli 2019 - Gepubliceerd op Amazon.com
A twisting, turning thriller, Truth or DIe, the latest D.S. Imogen Grey book will grip you from the beginning and keep you hooked until the very last page.
As with many thrillers, the less said about the plot the better, the less the reader knows going in, the more they will enjoy the book as it unfolds. All I will say is that it involves a murdered professor, a sultry temptress, a sinister game and for those who have read the previous Imogen Grey books, an old familiar face. On that last note, I should point out that despite this being the fifth book in an ongoing series, it is perfectly possible to enjoy the book without having read the others, the story is complete and self-contained, though it does of course develop the ongoing complicated relationship between Imogen and Adrian, the main characters. The book is fast paced and the plot is layered enough to keep the reader guessing, which is always important in a thriller, but I also really enjoyed the way the author delved into the private lives of the detectives and how that impacted on their motivations and actions.
I read and reviewed an ARC courtesy of NetGalley and the publisher, all opinions are my own.
Meer lezen
Een iemand vond dit nuttig
Vertaal recensie in het Nederlands

Diane H
3,0 van 5 sterren A dark and twisty British thriller overflowing with compelling human relationships.
12 juli 2019 - Gepubliceerd op Amazon.com
In Truth or Die, Detective Sergeant Imogen and her partner (and friend with benefits), DS Adrian are investigating a professor’s death. The philosophy professor’s head was bashed in with a glass paperweight. Their sleuthing uncovers an awful truth playing out at the university.

Both Imogen and Adrian are getting over recent relationships when this tale begins. While there is a mystery and some police procedures described, this seemed more an excuse to show Imogen and Adrian’s relationship moving forward rather than the other way round. There were also a lot of character names to juggle. I found myself frequently backtracking to determine who the character was that was speaking. I believe my problem was that I was trying to read this as a standalone. It would be much easier if I had the previous four books experience with many of the characters.

If you have read the previous books in this series and don’t mind some romance, frequent gore, and occasional twists in your police procedurals, you will already know whether you will enjoy Truth or Die or not. However, if you haven’t read the other books (at least the last one, The Promise), I think you will be as confused as I was while reading this one. I can only give my own review of course, so 3 stars for this character-driven thriller.

Thanks to Avon Books and NetGalley for a copy in exchange for my honest review.
Meer lezen
Een iemand vond dit nuttig
Vertaal recensie in het Nederlands

251Ehmyay
3,0 van 5 sterren Not a bad crime thriller; lots of references to previous books in series
11 juli 2019 - Gepubliceerd op Amazon.com
I hadn’t read the first books in the series, so I wasn’t quite sure what to expect. What I got was a mixed bag of a book. I thought that the plot was interesting and ultimately, that is what kept me turning the pages. For once, a tag line is accurate because it is not for the faint of heart. There were only a few grotesquely detailed scenes, but they were vital to understanding the motivations of the characters, so I didn’t mind them. I will say, however, that there was a lot of backstory and references to previous events that kept me a little bit confused at times–even though this could be read as a standalone, it would have been much more enjoyable had I read the others first, so readers may want to take that into consideration. The only real disappointment was with the reveal of the ultimate bad guy–I thought it fell flat and came out of nowhere. I was hoping for more of a twist. But otherwise, it was a good crime novel that explores the evil nature of man and how easy it is to manipulate people. I would recommend it. Thank you to NetGalley, Avon Books UK, and the author for a complimentary pre-release digital ARC of this book.
Meer lezen
Een iemand vond dit nuttig
Vertaal recensie in het Nederlands
Ga naar Amazon.com om alle 15 recensies te bekijken 4,1 van 5 sterren
Terug naar boven
Over ons
Verkoop bij ons
We helpen je graag
© 1996-2020, Amazon.com, Inc. en dochterondernemingen