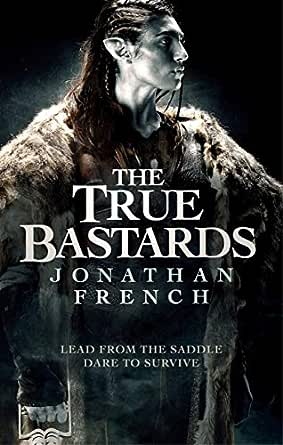 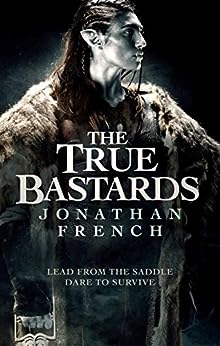 Fetching was once the only female rider in the Lot Lands. Now she is the leader of her own hoof, a band of loyal half-orcs sworn to her command. But the hoof she inherited is on the brink of collapse.

Tested to the breaking point by the burdens of leadership, Fetching battles desperately to stave off famine, desertion and the scorn of the other half-orc chieftains, even as orcs and humans alike threaten the Lots' very existence.

Then an old enemy finds a way to strike at her from beyond the grave - and suddenly only one faint hope for salvation remains.

Praise for the series:

'A gritty adventure with a fantastic, foul-mouthed voice' Django Wexler

'Jonathan French has to be lauded for his plot ingenuity, bawdry charm and vicious characters.' Fantasy Book Critic

Nerine Dorman
5,0 van 5 sterren Relentless pace
14 december 2019 - Gepubliceerd op Amazon.com
Geverifieerde aankoop
Author Jonathan French is one of my happy discoveries this year, and The True Bastards was on my insta-buy list the moment it came out. Following from the catastrophic events ending book 1 The Grey Bastards, book 2 shifts the point of view to Fetching, who is now tasked with leading a diminished hoof in the increasingly hostile Lot Lands. With her close friends Jackal hunting a dastardly wizard and Oats away to fight for gold in the pits, Fetch shoulders the full burden of caring for her people while herself suffering with a debilitating sickness. And it's not an easy task, and she often faces brutal decisions. Leadership is not for sissies.

But that's only the start of the story. French never lets readers get too comfortable as Fetch and her companions constantly have the proverbial rug yanked from beneath their feet. This novel is a classic example of ever-escalating disasters that severely test the heroes as they fight to stay alive, harried by implacable enemies.

We get to see much more of the Lot Lands, with tantalising glimpses into the centaur and elven cultures. Ancient conflicts bubble to the surface, along with strange magic and new alliances, often at such a dizzying pace that I was left quite breathless and would have liked a little more introspection from Fetching. French dumps a lot of lore on us – so there's much to pick through. Consequently, at times (and especially near the end), the writing feels a bit rushed, but I can forgive him because I was thoroughly invested in the story and will most likely reread this novel at some point in the not-so-distant future.

While there is most certainly more to come in this setting, book 2 has a satisfactory ending, a perfectly good 'happy for now' that sees the groundwork laid for conflict to come (and look forward to). As always, I'm over the moon with the underlying premise of this setting that continues the trend of a spaghetti western with half-orcs on hogsback that subverts the expectations of typical adventure fantasy. French's writing is fun, fast-paced and action-packed, and brimming with fantastic interaction between characters I've grown incredibly fond of.

Taylor Drake
5,0 van 5 sterren Great follow up
13 oktober 2019 - Gepubliceerd op Amazon.com
Geverifieerde aankoop
Great read. I thought this was not quite as good as the first one, but that still makes it a solid five stars in my book.

I missed some of the characters from the first book - especially Jackal, who only makes a brief appearance in The True Bastards. After reading his part at the end, I kind of think that his tale would have made a better book.

I'm just nitpicking, though. This was well worth the time to read it, and I'd recommend it to anyone who liked the first book in the series.
Meer lezen
2 mensen vonden dit nuttig
Vertaal recensie in het Nederlands

Big Dee
3,0 van 5 sterren Jackals Shadow
15 oktober 2019 - Gepubliceerd op Amazon.com
Geverifieerde aankoop
I've really enjoyed everything the author has put out so far but...this installment just didn't grip me like the others in the past. I think because Jackal was such an interesting POV in book one he cast a shadow over this one. The whole time I was looking forward to his introduction into this book - by the time he showed up I felt like it was too late.

Amazon Customer
5,0 van 5 sterren Like an old time steam engine
30 oktober 2019 - Gepubliceerd op Amazon.com
Geverifieerde aankoop
The story, like Fetch, starts slowly, inching down the tracks with a single puff, then another, and another and before you know it your riding a runaway bastard train barreling down those hot seething badlands tracks. Watch out! Hang on if you can, you puny frail—those big hogs with their bastard riders are heading directly for you!
Meer lezen
Een iemand vond dit nuttig
Vertaal recensie in het Nederlands

Daniel S. Palter
4,0 van 5 sterren A letdown
28 oktober 2019 - Gepubliceerd op Amazon.com
Geverifieerde aankoop
I truly loved the first book. This one not so much. The plot dragged the characters along like an amusement park ride where you are stuck on tracks going past paste board scenes. It made getting through the middle more a slog than a joy. The end was dynamite but I nearly gave up before getting there several times. Pity. The author CAN write and its a great world. Hopefully the next volume will be better
Meer lezen
Vertaal recensie in het Nederlands
Ga naar Amazon.com om alle 28 recensies te bekijken 4,4 van 5 sterren
Terug naar boven
Over ons
Verkoop bij ons
We helpen je graag
© 1996-2020, Amazon.com, Inc. en dochterondernemingen