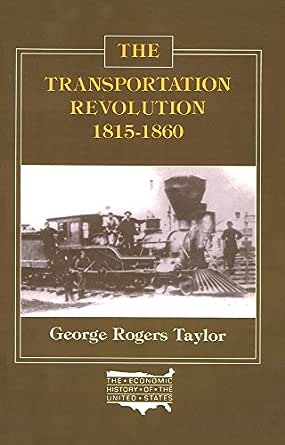 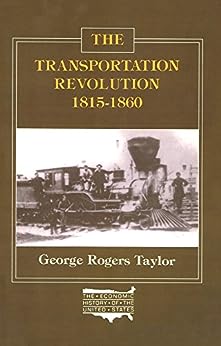 Part of a series of detailed reference manuals on American economic history, this volume traces the development and rapid growth of transportation across the USA in the mid-1800s.
click to open popover

Paul & DJ
5,0 van 5 sterren An excellent economic history
17 februari 2012 - Gepubliceerd op Amazon.com
Geverifieerde aankoop
This is a very good economic history covering many details about turnpikes, Federal roads, canals, steamboats, steam ships and railroads. Additionally it briefly covers many important aspects of manufacturing and technology during the period. The economy is also discussed, with details on the depressions and deflations, plus several graphs and statistical tables.

It is very well written, easy to read and has complete references.

I have 7 pages of typed notes from this book, which is much more than the average for this type book. From my notes:

"A coal mine may exist in the United States not 10 miles from valuable ores of iron and other materials and both be useless until a canal is established between them, as the price of land carriage is too great to be borne by either." "A ton of goods could be brought 3000 miles from Europe for about $9, but for that same sum it could be moved only 30 miles in this country". U.S. Senate Committee (1816) American State Papers: Misc II (1834)p 287

"During the 1850s telegraph wire reached nearly every part of the country". P-110

The factory system and market system were not typical before 1850. They appeared along transportation routes. p-215

Other good economic histories of the period are: The Economic Growth of the United States: 1790-1860 by Douglas North and A New Economic View of American History by Atack and Passell.

Larry B
4,0 van 5 sterren How we got here
11 mei 2010 - Gepubliceerd op Amazon.com
Geverifieerde aankoop
This is a fair book about the transportation system of the US, It tends to be mostly about funding and cost analysis, but does a good job of discussing technology and trade routes. I like the canal map.
Meer lezen
3 mensen vonden dit nuttig
Vertaal recensie in het Nederlands