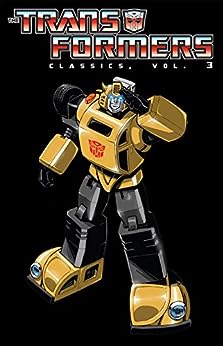 The historic comic book roots of The Transformers are re-presented for maximum Cybertronian enjoyment. Collecting issues from the original run, rejoin Optimus Prime, Megatron, and their competing factions as their war stretches across the cosmos. Freshly re-mastered and re-colored, these stories are accompanied by an in-depth introduction as well as select issue notes by Mark W. Bellomo. Originally published by Marvel Comics as THE TRANSFORMERS Issues #26-38.

The historic comic book roots of The Transformers are re-presented for maximum Cybertronian enjoyment. Collecting issues from the original run, rejoin Optimus Prime, Megatron, and their competing factions as their war stretches across the cosmos.
Freshly re-mastered and re-colored, these stories are accompanied by an in-depth introduction as well as select issue notes by Mark W. Bellomo.
Alle bekijken
click to open popover

Patrick Correa
3,0 van 5 sterren Bob Budiansky slips a few gears.
7 december 2013 - Gepubliceerd op Amazon.com
Geverifieerde aankoop
First of all let me state that despite what I'm going to say, this is a good volume overall. Not as good as the first 2 or the UK ones but not bad. Now onto the stories. I'm assuming you've read the first 2 volumes so there will be SPOILERS!

Following the shocking events of the last volume, the Autobots mourn their fallen leader with a touching "Funeral For a Friend". Meanwhile Ratchet deals with a human supervillain known as the Mechanic. The only bad thing about this story is the fact that Omega Supreme shrinks from this issue on. The funeral scene is very well written, and the Mechanic is pretty cool for a human villain.

We then come to "King of the Hill", an excellent story where the Dinobots come back and after beating Trypticon Grimlock takes over as leader of the Autobots. But he doesn't turn out to be a very good leader as we find out in "Mechanical Difficulties", which also features the return of the Mechanic. Not as good as the 2 stories before or after it, it's still better than some of the stuff you'll read in this volume. But while we're here, let's discuss one of the shortcomings of this volume. Some of you reading these for the first time will wonder what turned Bumblebee into Goldbug. The answer is in the G.I. Joe crossover miniseries, but unfortunately they won't be reprinting that until the last volume. While it's not as good as the UK story with their origin of Goldbug they are still far from the worst issues of the comic, and not including it costs this book a star (although technically they should have started including them last volume as the 4 issues run before issues 24, 25, 26 & 27 respectively; Megatron even makes a reference to the miniseries in issue #25).

"Crater Critters" cause great trouble for Autobot & Decepticon alike when they turn out to be Scraplets, little monsters that infect Transformers and cause them to rust. And despite the fact "The Cure" was very easy to find this 2 part story still remains one of the high points of Budiansky's run (for me anyways). It's certainly a better introduction for the Throttlebots than anything the cartoon did with them.

Now you might be thinking that this sounds great. But the streak of really good stories that started last volume ends with "Buster Witwicky And the Carwash of Doom". I believe the title speaks for itself. It's an incredibly silly story. The only good thing about it is Ratbat, who is given great characterization.

"Used Autobots" is better, at least until the ending where the Protectobots are okay bring Blaster back to Grimlock for execution! Still, there are some good moments. The battle between the Protectobots & Combaticons is great, and I loved it when Wheeljack made the Geothermal Generator, a device that converts the heat from Mount St. Hilary into Energon cubes. That is a welcome part of my canon anytime. In fact if you think about it it's downright necessary for the cartoon stories because I remember one guy pointing out how the Autobots never needed Energon cubes. Answer solved.

The respite continues with a reprint of the first UK story "Man of Iron" in issues 33 & 34. Whether you're reading it again or reading it for the first time amongst the US issues or at the beginning of the UK ones, this is a great story no matter where you place it.

But the quality slips again in "Child's Play". Admittedly it's a good issue apart from one thing; quite possibly the most annoying kids prior to the ones in the cartoons for Armada & Cybertron (though Armada kids were perfectly fine in the Dreamwave comic).

And to make things worse, they return in "Spacehikers". Though this story is a bit better thanks to excellent characterization of Sky Lynx, it's disturbing how okay the other Autobots are with letting Grimlock sentence the kids to death.

"Toy Soldiers" is unfortunately more of the same. The only good thing about it is that I'm sure the fiasco involving Triple I in here leads to the shutdown of them & RAAT after issue #39.

Mercifully, we end things with a good story, Trial By Fire. At least it would be good, if they had reprinted the Headmasters miniseries before this! I absolutely loved the miniseries & thought it was a much better introduction for the characters than either the American or Japanese cartoons gave us. But aside from being very good, they should have made sure to place it before #38 so that first time readers would know who everybody was. It doesn't bother me as I have the original copies of those issues & read them before this but it still bugs me. Anyways, this is a good story. Bob really knows how to write for these characters. Admittedly it's not as good as his earlier work or most of the stories in the next volume but it's still good.

A mixed bag, but I personally thought it was worth it. However, I must also complain about the choice of Bumblebee for the cover. He's not actually in any of these stories; much like Prowl isn't in any stories in Volume 5. The 2 covers should have been switched to match the stories collected therein. Prowl gets a cool moment in the first issue here, & Volume 5 features the triumphant return of Bumblebee (I agree with Ratchet, I liked that form much better. I'm glad that the comics decided to just have him as Goldbug for a bit rather than having him turn into Goldbug at the end like the cartoon did. ) So despite my complaints about not reprinting vital miniseries, some really bad stories and the poor cover choice this is still a good collection. I honestly feel that it does get much better in the next volume, but that's another review to be discussed another time.

samiam
4,0 van 5 sterren Headmasters limited series not part of this volume but still good reads
27 mei 2018 - Gepubliceerd op Amazon.com
Geverifieerde aankoop
I really like the stories in these Transformers classics from the 1980's Marvel run. I just don't like the presentation. In this volume, the 4 issue limited series Headmasters takes place between issues 37 and 38 but the Headmasters limited series are not part of this volume. Instead it is presented in volume 7. Just like the rest of this series, it is a paperback volume which means the book can't be open completely unless you bend the spine which could ruin the book. Included in this volume are issues 33 and 34 which is a complete reproduction of Marvel UK's Man of Iron story (parts 1 - 4). Good reading entertainment, just read it carefully if you don't want to ruin the book.
Meer lezen

Timmy Diner
5,0 van 5 sterren The epic turns serious...
23 februari 2013 - Gepubliceerd op Amazon.com
Geverifieerde aankoop
This is the point in the comics where the storyline is more serious compared to the last book which was more like an advertisement. The story adapts to a big change as two important characters are lost so these issues are like a brand new saga or it's just to sell more toys.

A many of these issues are Blaster and Goldbug on the run from the Autobots and Decepticons. It focuses on those characters instead of a bigger group of autobots. Blaster and Goldbug's story will not be finished until much later. My little complain is that it is interrupted by a 2 issue (which equals 4 UK issues) from the UK transformer comic. Those 2 issues are really out of place and are considered filters. If you look at the bright side, its nice to get different types of comics, more transformer action and a nice unique story. But I know people will complain that its too out of place and sudden. But compared to some issues in the series, it's definitely not the worse.

The last few issues introduce the Headmasters to the main storyline. It just raises the stakes and the issues shift from focusing on 2 robots and back to a team again. Many robots are introduced so you might see more unfamiliar faces which can make the fighting scenes a little less interesting.

This part will be my response to the customer who gave this book 1 star. I truly respect everyone's opinion but giving this book 1 star is pretty harsh. The reviewer says there are many elements that are not introduced like Goldbug, and Headmasters and the UK issues are really out of place. That is true but in a book like this, it only reprints the issues from the G1 comics and in their order. Adding the mini series would be too much for the book. In my opinion, it's not that big of a deal because what you miss will not leave you clueless for the rest of the series. As for the UK issues, I like them and they don't ruin the book for me.

Overall, if you're reading this series, this book is a very interesting and different approach that Transformers are taking which you will probably enjoy. There are some problems with the 2 UK issues and elements that are not being introduced but it can be overlooked. When you finished this book, you will be satisfied if not very entertained!
Meer lezen
Een iemand vond dit nuttig
Vertaal recensie in het Nederlands

Andrew Alvarez
5,0 van 5 sterren Nice collection of classic comics.
26 oktober 2013 - Gepubliceerd op Amazon.com
Geverifieerde aankoop
Having collected these comics when I was a kid, I was excited to see them collected and touched up in these volumes. Volume 3 contains some of the fun Transformers stories from the 1980s. Don't look for too much depth here but the artwork and story was pretty good for its time. Issues 33 and 34, the reprints of the Man of Iron story from the UK look especially stunning in their painted glory. My only disappointment was that the Headmasters miniseries which leads up to issue #38 was not included. It would have made sense to put it in here between #37 and #38 but I have a feeling we'll be seeing it in the final volume along with the other miniseries from this classic era of comics.
Meer lezen
2 mensen vonden dit nuttig
Vertaal recensie in het Nederlands
Ga naar Amazon.com om alle 13 recensies te bekijken 4,2 van 5 sterren
Terug naar boven
Over ons
Verkoop bij ons
We helpen je graag
© 1996-2020, Amazon.com, Inc. en dochterondernemingen